Tracing Georgia O'Keefe Across the Southwest

Rainbow at the Ghost Ranch

Georgia In Her Youth

Discovering the Land of Enchantment

Before Georgia O'Keefe became a living icon of Southwestern art, she was a successful modernist painter with good gallery connections in New York City. Then, in 1929, she went west and discovered the Land of Enchantment, better known as New Mexico. Eventually, she would call a spectacular piece of property, situated in the Abiquiu Valley, home. Here, at the Ghost Ranch, as the place was called, Georgia would spend the last forty-plus years of her life, rendering the stunning landforms of the valley and surrounding areas.

Not only did Georgia make many dramatic pictures right on her property, but also, she would journey to other places around the Southwest to paint and visit with friends. Fans of the talented and popular painter can visit many of the places that Georgia O"Keefe treasured during her lifetime. Few of these scenic locales, have changed in the decades since the American painter journeyed around New Mexico in her search for external beauty.

A Teaching Gig In the Texas Panhandle

From 1912 till 1914 Georgia O'Keefe taught art in the Amarillo Public School system. This primal teaching experience occurred 15 years before she would ever venture into New Mexico, even though this scenic state is located only a few hundred miles to the west of Amarillo.

Though Georgia made many impressive drawings, paintings and watercolors, while living in a small one room cubicle in the town of Amarillo, the place that seemed to have impressed the young artist the most, is Palo Duro Canyon, a strange place of red rock cliffs and arid canyons cut right into the endless sweeping prairies of the Texas panhandle. Some of her most stunning landscapes of that time were down on her occasional visits to that special site situated only a few dozen miles southwest of Amarillo.

For those wishing to explore this beautiful area on their own, all you have to do is visit the present-day Palo Duro State Park. Here visitors will find a scenic park road that descends into a stunning natural crevice along with many easy to navigate short hiking trails, which follow the edges of the red rock cliffs.

The Ghost Ranch In Abiquiu, NM 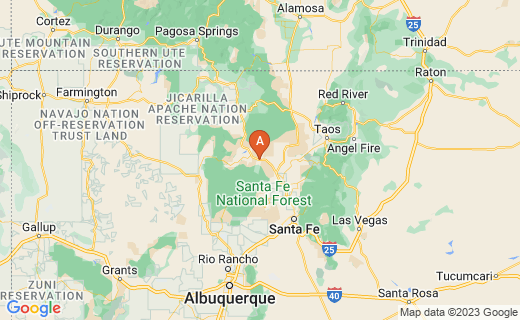 A Backside View of the Ranchos de Taos Mission

In 1929 Georgia O'Keefe arrived in Taos for the first time, as the guest of Mabel Dodge and her Pueblo husband Tony Luhan. This was Georgia's first visit to both the high desert town of Taos and the state of New Mexico. Here she also stayed at D.H. Lawrence Ranch north of Taos, near San Cristobal and the Mabel Dodge house, which is located right in Taos. Today, the Mabel Dodge House is a functioning inn and conference center, which takes in visitors on a nightly basis.

After 1929, her Taos journey became an annual adventure. For her, this was a time to rest and take in the ever-present desert and mountain panoramas that occur along the Rio Grande, as it flows south from the Colorado high country. As the years passed by each journey to New Mexico became more and more important to the developing artist, eventually leading to year-round residency in nearby Abiquiu.

A Colorful History of the Ghost Ranch

Although Taos provided a tight circle of friends and artists that nurtured her artistic growth, Georgia would find her own little retreat in a beautiful and isolated valley, located west of Espanola, NM. She first visited the area in 1934 and fell in love with the 21,000 acre estate known as the Ghost Ranch. In 1940, Georgia would be able to purchase a seven acre tract and build a small home on the land. She lived there until her death in 1986.

However, the Ghost Ranch did not begin as an American owned ranch, but rather, it was first a land grant from the King of Spain, given to a Hispanic family in 1766. Unfortunately, the family took to feuding, which resulted in one man murdering his brother and then consequently being hung for his crime. Eventually, an American man, Roy Pfaffe, won the spread in a poker game, but then quickly lost the property to his wife in a divorce settlement. After changing hands one more time, this piece of turf is currently owned by the Presbyterian Church. Visitors (of all denominations) can stay at the retreat and hike the nearby backcountry trails that so inspired Ms. O'Keefe. Georgia O'Keefe's home still stands and is open to the public.

The Pedernal in Painting

There is one distinct landform that can be seen in many of Georgia's New Mexico landscapes. It is a flat-topped volcanic peak that dominates the Abiquiu Valley landscape. The mountain is called Cerro Pedernal or sometimes just "The Pedernal". Translated from Spanish to English, the place name means "flint hill".

Avid hikers might be pleased to know that the summit of this foreboding mountain can be reached in just several hours of strenuous exercise. Even so, those wishing to reach the summit should be aware that the change in elevation is around 2,000 feet and that there is a small, vertical rock wall (only about ten feet) at the end of the climb, which must be negotiated using hand over foot rock-climbing techniques.

However, those who do manage to make it to the top will be treated to a spectacular desert vista and the chance to explore a bowl-shaped caldera, which is a prominent feature of the tops of most volcanoes, both active and extinct. Fortunately, the Cerro Pedernal is quite extinct.

Anyone familiar with Georgia O'Keefe's work will notice a fair number of landscape paintings, featuring black, eroded hills. To Georgia this series of naturally occurring mounds was known as the "Black Place", a name which has kind of stuck to the strange landforms. These hills of bare volcanic soil really do exist. They are located about 150 miles northwest of the Abiquiu Valley near the town of Counselor on US Highway 550. There is no special designation or marker for the hills, except they can be found near the Bisti Badlands. Visitors should be aware that the area is now the site of at least one active oil drilling rig.

Much closer to Georgia's home in the Abiquiu Valley and much lesser known than the "Black Place" is a towering group of rock formations informally known as "The White Place". Only featured in a few paintings, these limestone canyons are more commonly known as "Plaza Blanca".

Santa Fe is the oldest (and highest) state capitol in the United States. It is also the home of the Georgia O'Keefe Museum, which houses a fair selection of her paintings. The cherished art institutions puts up exhibitions of Georgia's work with an occasional guest appearance by one of her contemporaries, such as Ansel Adams, Marsden Hartley or Alfred Stieglitz. Though Georgia did not spend much time here, this Southwestern cultural hub has a thriving art scene all its own.

Georgia In Her Later Years

Looking Back at Georgia O'Keefe

For those interested in admiring the art of Georgia O'Keefe, the opening of the Georgia O'Keefe Museum in Santa Fe marked a major milestone in the appreciation and understanding of this transplanted Midwestern woman. Art lovers from all over the country journey to this Santa Fe museum, just to get a look at the collection, which focuses on her lengthy time in the high desert country of the Southwest. By looking at the paintings here and at other Southwestern venues, viewers can come to know the artist, who progressed from a urban modernist into someone strongly tied to the land of the Abiquiu Valley, which Georgia eventually came to call home.