From Addingham in Wharfedale...

A.look around Bolton Abbey midway along your route has to be a highlight. From there on is a tapestry of rolling hills, riverside walks, and even a golf course (what more can you want?).

Addingham was a mill village that produced woollen textiles to be exported around Europe and further afield in various forms. Its history is of commercial interest, a welcome alternative to nearby Ilkley and Keighley. Many walkers only see the place as a 'stage' on their 95 mile Dalesway hike.

If you drive there park close to the school east of the village, then head west over the old railway and gradually climb to the moor. The lane gives way after almost a mile to a path that takes north-west onto a golf course. First there's a mere (small lake) on your left, a handy spot to take in the view and get your breath back after the climb, and take in the view behind on Ilkley Moor.

Onward, head on north-westwardly past the golf course, uphill still although not sas steep, past Highfield House and its ancillary buildings to your left, and on to the 'homer farm. Pass through the farm yard and carry on north-west on a signposted, although not too clearly marked path. When a path is so vague look for stiles largely inset in the stone walls in this area. These are usually good markers for walks.

To your left is Chelker Reservoir, noted as having the first (now de-commissioned) wind turbine in England...

However it's not accessible from the path these days. Carry on along a wall for around 500 yards (200 m) north of the reservoir until you come to a where paths meet at Berwick East.

Take the path north-eastward from the farm Where it forks take the path right. You might make a short detour here for the 'Trig point' (where map sightings were made for the Ordnance Survey) of Haw Pike. This is a beauty spot you shouldn't miss, with a vista over to Beamsley Beacon, the Southern Dales and Bolton Abbey estate in the vicinity..

Join a lane that takes you down a steep bank from Hawpike Farm to the A59 dual carriageway, cross the road carefully. - it's sometimes fairly busy, so be prepared for a wait - to reach the Devonshire Arms, a fine looking hotel. Follow the road north to the ruins of Bolton Abbey three-quarters of a mile off.... 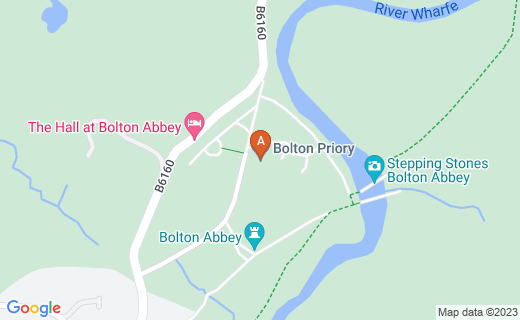 ...A fine looking Augustinian abbey set well on the bank of the River Wharfe.

You'll be able to take your time, look around, maybe take a breather in the cafe here and watch the river flow south-east. The monks never rushed around in the way we do now - maybe there's a lesson there.

You may even want to try your balancing skills by crossing the river over the large, square stepping stones. Many do, and cross without getting wet, and back again.

Return to the A59 along the river bank from the abbey to Addingham. Your route takes you along the Dalesway, a well-signposted and easy to follow path. The first part is open countryside with grand vistas. After passing under the A59 the land is hilly with some woodland areas. The path stays largely on the riverbank as far as a caravan park that marks the edge of Addingham, and back to where you started out.

Wharfedale and the Yorkshire Dales in general

The walk is no great challenge and can be handled by most reasonably fit age groups, although there's a steep start and paths near Chelker Reservoir might be hard to follow. Best around Bolton Abbey. For a detour challenge try walking the stepping stones there across the river and back.

There is a cafe at Bolton Abbey as mentioned, as well as a cafe and a choice of several pubs in Addingham.

Take an Ordnance Survey map (Explorer Number 297). In case the weather closes in take a compass. Carry weatherproofs, wear good waterproof boots with thick socks - it can turn cold suddenly - and preferably cord trousers not jeans. You don't want to walk around in damp clothes.

Take your litter home with you if you have a picnic or snack along the way, and remember to close any gates behind you.