Film-Making, Business, and Travel in New Hampshire at Mount Monadnock

The sight of Monadnock affects the spectator physically, it stirs the blood like military music.

A documentary about the mountain in Cheshire County is in production, financed by contributions from individuals and organizations.Filmmakers hope to release the film in May 2013 and as of March, they had 25 hours of film footage, along with a musical score composed by local talent.

More about the elaborate film is offered at the link below, followed by videos.

Some local people climb this mountain every single day and try to break each other's records. In addition, they have over 30 trails from which to choose. Interestingly, it once had a hotel located halfway up the mountain face on the southwest side.

The mountain is 3,165 feet above sea level, but the summit is engraved with the number 3,166 feet, while no one knows why the discrepancy exists.

Famous authors Ralph Waldo Emerson and Henry David Thoreau visited the mountain to write about it.

If you have never traveled to New England and the State of New Hampshire, you might enjoy the southwest corner of that state. Generally known for its fall foliage tours and skiiing, New Hampshire is also home to this Monadnock Region, named after the Indigenous People's name that means "The Mountain That Stands Alone."

Monadnock itself is a type of mountain the includes a knob on top of another base; and, Vermont north of New Hampshire also features a Monadock Mountain.

The NH mountain is the Grand Monadnock Mountain nearest Jaffrey NH on State Route 124, which is Jaffrey Road on the west and becomes Mountain Road at the foot of the mountain. It changes again to Main Street in Jaffrey proper, a non-incorporated town of about 5,500 people as of Census2010. Further to the east, it becomes Turnpike Road.

Monadnock Region: From Jaffrey to the Mountain 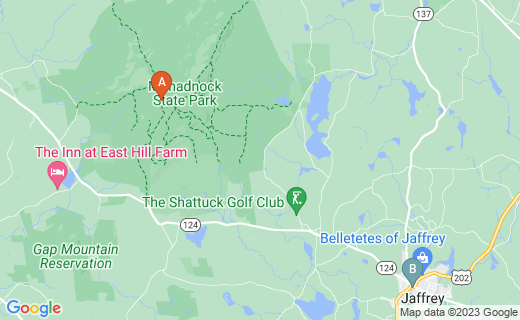 This ius the center of Jaffrey NH, in the Main Street Historic District.

Route 124 began as the Third New Hampshire Turnpike in 1802, and Jaffrey opened for business as Jaffrey Center, a stagecoach stop.

By 1820, tourists were arriving in Jaffrey Center and East Jaffrey to stay while they climbed Grand Monadnock Mountain. The town grew, and notably, increased in population to double its size 2000 - 2010, based on tourist trade and the local manufacturing industries.

Founded in 1970, the Jaffrey Center Historic District was named to the US National Register of Historic Places in 1975, with several historic buildings to enjoy white visiting.

In addition, the town is full of Revolutionary War history, because a band of 52 men from this particularly small place joined the Continental Army and fought at the Battle of Bunker Hill. Over 60 peope served in WWI and 504 individuals from Jeffrey went off to fight in WWII.

The famous author Willa Cather is buried in Jaffrey NH, so the cemetery is also a tourist attraction. New Hampshire has been the home or inspiration to a number of well known poets that are honored by cemeteries, monuments, poetry readings, festivals, and museums displays in the Monadnock Region. The region includes several townships, while Jaffrey and Keene are major tourists attractions.

Monadnock Region: From Keene to the Mountain 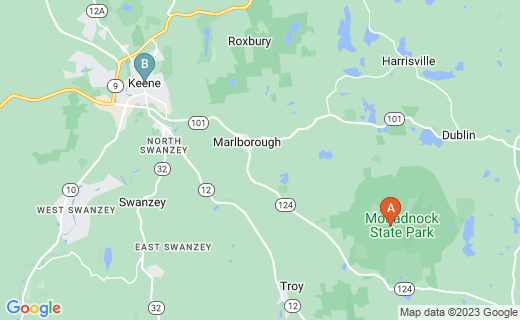 Keene is to date the only incorporated city in the region, supporting over 24,000 individuals. A good number are students at the two local schools: Keene State College and Antioch University New England (a branch of Antioch University in Yellow Springs, Ohio).

It began as an army fort used to protect its people in the French and Indian Wars in the early 1700s. It grew into a manufacturing economy and today, is known for its success in Education, Insurance Products, and Tourism as well as Manufacturing.

The local Horatio Colony is a nature preserve with a mansion museum built by early industrialists in Keene, all listed on the National Register of Historic Places. Wyman Tavern is named for a Revolutionary War hero.

Every October, a huge Pumpkin Festival in Keene includes a wall of Jack-o-Lanterns numbering thousands of carved and lighted pumpkins. One recent year, Keene won the HGTV Pumpkin Wars contest.

In the summer, Keene holds a music festival during the days of late August and early September. The city is very active in supporting about a dozen local vocal music groups.

Antioch University in New Hampshire supports several important educational centers that investigate and improve life in a number of areas for our country and its residents. A few of the most important centers include a Family and Couples Therapy Institute and:

Cheshire County supports more than a Tourist Industry and offers at least a few thousand jobs to residents. Healthcare jobs outnumber those in any other industry several times over.

Peterborough is east of Jaffrey, near the order of Cheshire County, and offers additional Healthcare and Manufacturing jobs at: 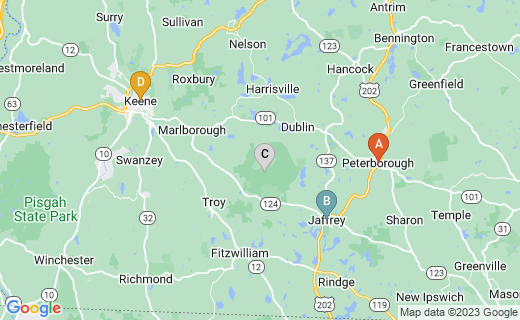 In March 2013, nealy 4,000 open jobs were advertised for this region within a radius of 25 miles of Keene, Keene and Jaffrey being ony about 17 miles apart. The listings take in all of the Monadnock Region. Most needed are Healthcare workers: