Between 1841 and 1869, an estimated 400,000 pioneers travelled the 2,000 mile Oregon Trail from its starting point in Independence, Missouri to the Oregon Territory. What was a difficult and often deadly four to six month trip for the pioneers can today be completed in a week or less. Following the Oregon Trail by car is a great educational opportunity for families and history enthusiasts.

The state of Nebraska hosts one of the longest stretches of the trail, as well as many famous landmarks. This article describes some of the highlights, as well as a few suggested side trips. 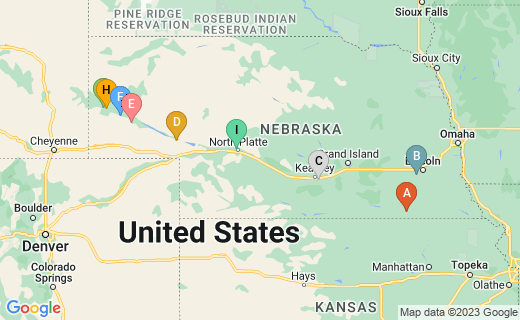 Robidoux Pass is located about 9 miles west of Gering.

If you're travelling east to west, as the pioneers did, a great starting point for your Oregon Trail trip through Nebraska is Rock Creek Station State Historical Park in Southeastern Nebraska. A Pony Express and stagecoach station, Rock Creek also serviced many pioneers heading west, and the park is home to trail ruts and pioneer graves, as well as reconstructed buildings and historical exhibits. Rock Creek is also the site of the infamous gunfighter Wild Bill Hickok's first kill.

An interesting side detour in this area is Homestead National Monument, which commemorates the Homestead Act of 1862, and has many interesting exhibits relating to the prairie pioneers.

Nature lovers may appreciate a trip to the National Audubon Society's Spring Creek Prairie near Denton, which offers wagon ruts as well as 400 acres of native tallgrass prairie, wetlands, and bur oak savannah, with hiking trails.

After Rock Creek, the trail passes by several massacre sites and graves, including the grave of 23 year old Susan Hail near Kenesaw. Hail died of cholera in 1852 and her grief-stricken husband returned to Independence to purchase a tombstone for her grave, which he carted back in a wheelbarrow to place over his wife's resting spot. Many later immigrants commented on the grave in their journals. 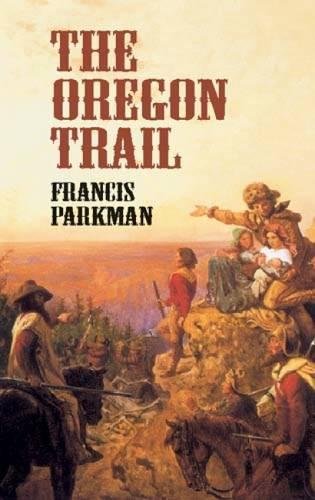 En route to the next big stop, Fort Kearny, you may wish to make a detour to Grand Island to visit the fascinating living history museum, Stuhr Museum of the Prairie Pioneer. For those headed to the Black Hills of South Dakota, Grand Island is gateway to Nebraska Highway 2 through the Sandhills and on to the Paha Sapa themselves. Birding enthusiasts may also wish to take note that Grand Island is considered one of the best birding spots in the world.

The highlight of the Oregon Trail in central Nebraska is the Fort Kearny State Historical Park. Fort Kearny was the first fort built specifically to protect the pioneers along the Oregon Trail. The fort was crudely built - it was said that snakes often passed through gaps in the sod walls of the buildings - but it was nevertheless a major stopping point along the trail, where many pioneers rested and purchased food and other supplies. In late May at the height of the trail's popularity as many as 2,000 pioneers might pass through in a single day.

(Note: Fort Kearny should not be confused with Fort Phil Kearny in Wyoming, the site of the Fetterman Massacre.)

After Kearney, a couple side short side trips worth visiting are the Pony Express Station and Sod House Museum in Gothenberg, and the Buffalo Bill Ranch State Historical Park and Recreation Area near North Platte.

At Ogallala, it's time to leave I-80 and start heading northwest on Highway 26 instead. Beach lovers and water sports enthusiasts may want to pay a visit to Lake McConaughy, Nebraska's largest lake, which offers over 100 miles of shoreline and countless hours of recreational bliss.

Not far from McConaughy's western shore is our next stop on the trail: Ash Hollow and Windlass Hill. Though the presence of an actual windlass on Windlass Hill remains disputed, there's no doubt it was a tricky spot for wagon trains. Deep ruts still remain on the hill's steep sides. At the bottom of the hill was a sweet, clear spring, one of the only ones the pioneers had encountered for weeks.

Ash Hollow is also near the site of an important river crossing for the pioneers. The Platte River Crossing (or California Crossing), as it was known, was one of the easiest spots to cross from the southern to the northern banks of the Platte River because the river was often only 1-2 feet deep at this point, though it could be as much as 2 miles wide.

Further west on Highways 26 and 92 are some of the most famous landmarks of the trail: Courthouse and Jailhouse Rocks near Bridgeport, and Chimney Rock, which is basically in the middle of nowhere. All are easily visible from the road, but it is possible to get closer. Many modern travellers are unimpressed by Chimney Rock in particular, but it is worth remembering that the rock was over 100 feet taller during the time of the pioneers, and that many pioneers had never before seen rocky outcrops of this sort, if any at all.

The next stop along the trail is Scotts Bluff National Monument, another impressive pile of rock looming above the otherwise relatively flat shortgrass prairies of the Nebraska Panhandle. The bluff was named for Hiram Scott, a fur trader who was abandoned at the base by his companions due to illness, and is believed to have died there.

A final stop for Oregon Trail enthusiasts in Nebraska is Robidoux Pass, near Gering, which includes an authentic reproduction of a trading post operated by the Robidoux family, including Joseph Robidoux II for whom St. Joseph, Missouri is named. It was a popular stopping point for pioneers following the trail.

From here, you can continue following the trail through Wyoming. A few interesting side trips in the area include Agate Fossil Beds and Lake Minatare. You can also head north to Chadron, Fort Robinson State Park, and the Black Hills.

For a more complete listing of Oregon Trail sites in Nebraska, please visit this page.