Fisherman’s Wharf is a district of San Francisco, located directly bordering the bay, widely said to the city’s most popular tourist attraction. Known for its seafood and its landmark attractions (such as Alcatraz and the sea lions at Pier 39), in many ways Fisherman’s Wharf is the district that most often represents San Francisco to many visitors.

Though this district has been well covered by others, in this article I will briefly give my own suggestions about where to go, what to do, and of course, where to eat!

Let’s begin with how to get there. You can get to Fisherman’s Wharf by F-line streetcars, cabs, or rental cars. Please keep in mind that if you choose to drive, parking is seriously hard to come by. My suggestion to drivers is to find a parking spot and spend the rest of the day on foot, which is generally the best way to explore the city anyway.

Besides cars and feet, there are only a couple of other options. The F-line connects the Castro district to the Wharf (4 stops) and is a good way to see downtown San Francisco. Cabs can be a bit pricey, about 45 dollars from SFO to the Wharf, but are relatively convenient if you’re staying in the city.

Speaking of transportation, the cable cars are worth a trip.There are 3 cable car routes in total, but only two have stops in Fisherman’s Wharf: the Powell-Mason and the Powell-Hyde lines. They end at opposite ends of the Wharf, so do some planning and pay attention to the signs.

Both lines begin at the intersection of Powell Street and Market Street and continue up Nob Hill and cross California Street before splitting at Jackson and Washington. The last stop before they split is a good place to get off and walk to Chinatown, just a couple of blocks away. From there, Powell-Mason passes Russian Hill and North Beach to lead to its final destination at Bay Street.

Powell-Hyde is, in my opinion, the far more scenic route to Fisherman’s Wharf. This line passes great views of Russian Hill, Lombard Street, and a vista of the bay that showcases Alcatraz and the Golden Gate. This line also ends at Fisherman's Wharf, but near Ghiradelli Square on Pier 39.

Interactive Map: Where is Fisherman's Wharf? 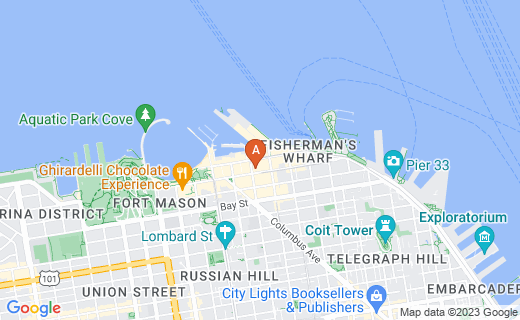 Here is our most well-known district! As you might expect, it's right along the Bay. If you're feeling up for a walk, I like Ghiradell's to Pier 1.

If you're a sweet tooth, Ghiradelli Square is the place for you. As the Bay Area chocolate supplier, this Square not only has several incredible chocolate shops but also has ice cream and more-than-mugs souvenir shops. The square is also a historical city landmark and is very close to many art galleries and restaurants.

Near Ghiradelli, there's no need to search for lunch or dinner; I've eaten at almost all of the restaurants near there at sometime with someone, and though none are uniquely great, they're all pretty decent for clam chowder or other classic Wharf dishes.

One place that’s nice is the Pier Market (Pier 39, at Cat Beach St. and Embarcadero). Good for those who want seafood, clam chowder, and great views of the bay while they’re eating. Pretty nice place for visitors to get a sense of the real Wharf, though like all places on the Wharf it’s a bit touristy.

For those who are looking for something more casual, I recommend just trying the sidewalk stands that dot the streets, though if you have a sensitive stomach you may want to be careful. Most of the places on the Wharf are fairly decent, so unless you’ve little common sense or are incredibly unlucky, you probably won’t go too wrong.

Unfortunately, especially in peak season, many restaurants are chock-full of irritating tourists (no offense or anything). If you’re looking for something more local... Well, to be honest, you’d probably be better off leaving Fisherman’s Wharf. It’s a good place to go and snap some pictures and spend a fun day, but at least in my opinion visiting only the Wharf is like ordering a SF burrito, opening it, and eating only the rice and beans. Honestly, I’ve seen that happen more than once. What’s wrong with you tourists?

Just as a note though, if you really do want a burrito, don’t get it at Fisherman’s Wharf. Head over to the Mission.

Landmarks and Attractions, Things to Do

Ok, back on topic now.

Fisherman’s Wharf has many of the landmark “San Francisco” sights. I stand by my view that it’s rather touristy, but some spots are popular for a reason. You probably heard of the sea lions at Pier 39 (Pier 39, Beach St. and Embarcadero). They’re present in greater numbers in late fall and the winter, but generally there will be at least a couple chilling in the sun.

Fisherman’s Wharf is also the way to get to landmarks like Alcatraz and Angel Island. Those two have been covered by people more qualified than me, so I won’t go into any details. Just know that if you only plan to get a couple of pictures instead of spending a whole day there, one of the 1-2 hr private cruises might be the way to go. You can find them all along the pier, and their prices are generally great.

There are also some interesting side things to do if you plan to spend an entire day at the Wharf. Fish Alley (near Leavenworth and Jefferson) has extremely fresh seafood, direct from the bay, and is a great place for those who love fish and don’t have sensitive noses. You can see the fishermen hauling in their catches at 6 - 7am if you’re an early riser.

Both the Wax Museum (145 Jefferson St) and the Ripley’s Believe It or Not (175 Jefferson St) are well known hotspots that are especially good for families, and they’re within walking distance of each other. There is some nightlife at Fisherman’s Wharf, though it's not nearly as prevalent as in some other districts. I’m not that familiar with it though, so here’s a link if you’d like to look into that.

Also, a couple of sites are available for those looking to see another side of the Wharf. There are historic ships at Hyde St. Pier (End of Hyde St.) which are great for anyone interested in the historic side of the pier. The Aquarium of the Bay (Pier 39) could be worth a visit for those who don’t often see aquariums. However, if you’re doing a California tour, you may want to save your aquarium visit for Monterey. Aquariums, at least to me, seem the same everywhere, and this one doesn’t give you much SF flavor.

Something I would recommend visiting is the Cannery. With nice views of the bay, neat bars, cafes, and shopping, this is a good spot for those who are either strapped for time or those who don’t plan to spend long in Fisherman’s Wharf. Here you can grab some clam chowder and shop for any souvenirs - besides T-shirts and mugs. Those can be found in little tourist shops all along the Wharf. Trust me, you won’t miss those; they’re everywhere!

Speaking of people targeting tourists, you may want to be especially careful with your wallet or bag in Fisherman’s Wharf. It’s not a dangerous area, but because of its high tourist concentration, pickpockets tend to gather.

However, as long as you use common sense and basic travel precautions, I don’t think there will be much of a problem. Just keep your wallet somewhere reasonable (not your back pocket) and be a bit alert.

The busy street is also a good thing, however. Most those in the crowd blocking the walkways are watching the street performers. There is a fair amount of talent about on any given day. The performances range from juggling to dancing to musicians to human statues. This has to be my favorite part of Fisherman’s Wharf.

Someone I want to throw in here - honorable mention - is the Bushman. The Bushman is an African-American fellow who basically grabs a couple of branches and hides in front of a trash can to startle tourists and, sometimes, locals. I admit, he got me a couple of times. You’d think I’d be on the lookout for a bush with feet “growing” somewhere illogical, but nope, somehow I can’t see him. He’s grown so notorious/popular that he’s got his own Wikipedia page. If you see him (and especially if you don’t), just enjoy the prank and don’t sock him.

And finally, be aware of what time you’re planning to come. Certain times of the year are busier than others because of events and festivals that take place. This is true for all parts of the city, but especially Fisherman’s Wharf, popular for its notoriety to tourists and convenient over/in-bay event viewing.

The two I would keep in mind are Fleet Week and Crab Season, both of which make the always-crowded Wharf even more so. Fleet Week (1st week of October) is a very cool aerial stunt plane show done to honor our American Marines and Air Force. Crab Season is mostly in November and is pretty much just that, the season where the crabbers bring in the crabs. Whether you love events like those or prefer to avoid the crowds, book accordingly.

That’s basically all I have to say about Fisherman’s Wharf. It’s not the part of the city I know best, and to be honest it’s not really my favorite district. Though definitely worth a visit, I highly recommend you visit some other sections (like Chinatown, the Mission, and the Castro) to get a complete sense of the city. Enjoy your visit to the City by the Bay!