We live in sunny, warm south Florida. It was time for a change in scenery and temperature.

Our family vacation was going to be several days in North Carolina. I wanted to take the kids skiing. Last year, my parents and I flew with the kids to north GA and popped into to NC to see snow.

I grew up skiing... well as much as a Florida girl can. My family used to go (I think) just about every year. We traveled all over the US for it: North Carolina, Vermont, Colorado, Lake Tahoe. All fun, but west coast skiing is my personal favorite.

Anyway, my kids have never been. And actually, neither had my husband. It was time to rectify that. In August, the kids and I spend a long weekend at a nice cabin about 20 minutes north of Maggie Valley. The kids fell in love with the cabin (which is really an incredible house, not a small "cabin"). And my folks wanted to see it in the winter. So our ski trip was born.

We (my folks, me and Stu) planned the trip for the long weekend in January, which just happens to coincide with Buddy's birthday. It was all set. My parents invited my aunt and uncle. And when my brother-in-law heard we were going skiing, he and my sister decided they'd come too. Now we were pretty full. The house sleeps 10, so that's not a big deal. My aunt and uncle would be driving from Tennessee. Stu and I decided to start our vacation a little early. We opted to drive with the kids the day before everyone else would be flying.

So I hopped on the internet, found a hotel and began planning out our little StuCrew family mini-vacay.

On Wednesday morning, we piled into the car and took off.

In the days leading up to the road trip, I was trying to explain the license plate and alphabet games to the kids. Buddy thought it sounded "cray-cray". Rea said, "Is there an app for it?" I laughed, then looked... And guess what? There is a free app for the license plate game. Yay! It's actually really pretty awesome - way more sophisticated than when we were kids just shouting out the states. On the app, when you mark off a seen plate, the app drops a pin into your location. You can see a map of where you saw the other plates. Stu and I had the most fun with it. Throughout the entire trip, we saw 78% of the states... kind of amazing. And almost all of them were seen in Florida on I-95.

The drive went well. We stopped a few times for the bathroom. Basically, when the kids would get whiney, we pulled into a McDonald's (my road trip potty standard) and let them out of the car to stretch. FYI & Tip: the McDonald's at exit 249B on I-95 is really clean and nice. If you need to stop, go there.

We were coming into Jacksonville just in time for lunch. Stu and I had planned on stopping for a real lunch on the road. We looked for an exit with a Chick Fil A, those are usually a good bets for restaurants. It didn't take long to find one. We got off on Baymeadows, heading east. About 1/2 mile down the street on the left sits the 4 Rivers Smokehouse. The parking lot was packed. We thought that seemed like a good omen. After circling around, waiting in the parking, a spot finally opened up.

The inside was even more packed... if that's possible. The amazing smells were enough to convince us to stay put. This restaurant is cafeteria-style dining. You wait in a long line, place your order as you walk down the line --- like a BBQ version of Chipotle. The tables, in this one anyway (it is a chain, several of them in FL, check out their website here), are long high school cafeteria kind. The outer edges of the restaurant had booths, but they were full when we walked in.

Stu took the kids to find a spot at the big tables. I waited in line.

It was so delicious. I ordered a small pulled pork sandwich with a side of sweet potato casserole and cole slaw. The potatoes were ok, not my favorite ever, but yummy. The sandwich was incredible. I'd drive a few hours to the closest one again just to eat it.

Stu opted for the St Louis style ribs. He said they were the best he's ever had. And he talked about them for at least a week to anyone who would listen.

The point is, my Crew HIGHLY recommends the 4 Rivers Smokehouse. 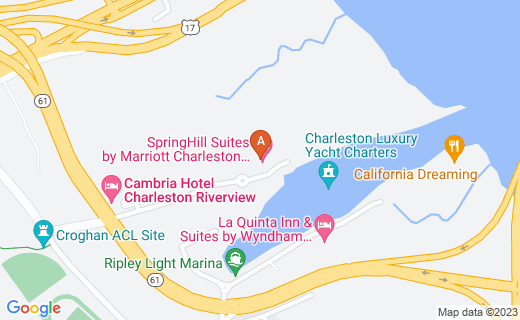 We made it. I think the trip was fine. I am pretty proud of my monsters and how well they handled the car ride - they are more accustomed to flying. This was a great first road trip for our family.

We arrived at our hotel a little before dinner time. I had booked us at the Marriott Springhill Suites. I chose it for a few reasons:

The hotel was nice. In true Charleston fashion, the check-in desk and main level are one level up from ground - not something Floridians are traditionally used to. But better for a flood. =)

The Springhill Suites sits on the water. We had a marsh view - the other would have been the river. No biggie. The marsh view from the 4th floor was fine. We weren't going to be there long anyway. When I checked in, I asked the concierge for a dinner recommendation. He suggested the California Dreaming. It was literally across the marina from our hotel in what looks like an old fort.

The restaurant was cool. I am glad we went there. The ambiance is awesome. I was a bit disappointed to find out that the building is a fake fort... built in the 1980s for the restaurant. But it's still super cool and worth a stop. The honey buttered croissants are AMAZING! Our hotel gave us a coupon for a free set (thanks). I ordered the steak salad. I cannot find the words to describe the incredible, scrumptious, divine BACON-infused honey mustard dressing. Yes, you read that correctly. The steak on my salad melted in my mouth. I was completely satisfied. Stu ordered chicken parm... he was under-whelmed. Poor guy. The kids had loved it.

We woke up on Thursday morning. It was Buddy's birthday! YAY! Happy birthday little guy.

After we packed up and ate (the free) breakfast at the hotel, we crossed the bridge into historic Charleston and went to the Children's Museum. We were basically there the minute they opened.

The museum was cool. Not exactly what I was expecting, but super fun for the kiddos. Parking is fairly easy: you can park on the street (meter maids are everywhere) or you can park next to the train museum (which is next door to CML). We opted for option 2. Parking was $2/hour. I set the timer on my phone so we wouldn't forget about it.

The museum costs $10/person. But that price is good for the entire day. So if you were going to be in town all day, you could leave and come back as often as you'd like. They give you a sticker to wear - WARNING: they are the HARDEST stickers in the world to remove. Mine nearly destroyed the sweater I was wearing.

The Children's Museum of the Low Country is basically a series of attached rooms. Each room is something different. And the kids can basically touch, play and manipulate just about everything in that place. My kids especially loved the motion room where you can test Newton's laws of physics using golf balls. A close second was the pirate ship room. I loved the water room where Rea and I raced tiny canoes.

We only spent an hour there, but I could have spent a while longer. The museum was doing some activity with snow in the art room, but we needed to get on the road. You can check out their website for activity information. If you're in the area and have kiddos, I highly recommend it. There's an infant and toddler section too, so it's fantastic for all ages.