Tiger, Tiger, my encounter in India with the noblest of creatures.

This is a true story, I was on holiday in India and we spent 7 days at a magical place called Ranthambore. We stayed in a small camp of bungalows near the reserve and we had a wonderful experience. Every night we ate outdoors and I have never seen so many stars in the sky.

Far from the dust track that we were following we came upon a wide lake. It was slightly cooler here, the lake looked inviting, but I had been watching crocodiles almost four metres long sunbathing some way off and I decided that the lake was theirs. I think crocodiles are a little possessive and they probably would not be too pleased about me swimming there.

Above in an incredibly blue sky, Fish Eagles circled in their usual carefree manner. I leant against a fallen log and soaked up the scene trying to commit the moment into my securest memory bank.

There were a number of alarm calls from the langur monkeys and various deer and then suddenly there was an unusual quiet. The colourful peacocks that wander the forests of India call constantly but even they were quiet now. A movement across the water on the far bank caught my eye; it was just a blur nothing definable, just a slight movement in the tall bulrushes across the lake. I stopped and stared, frozen to the spot, wishing my hearing had not been dimmed by countless years of rock and roll. There it was again a movement; a flash of colour, a fleeting glance told me that this was what I was in India to see. My heart was beating so fast that I was sure that anything in the forest for miles could hear it.

A movement in the water told me that the crocodiles I had been watching earlier sunning themselves on the lakeside had now taken to the water. Like prehistoric logs they floated deceitfully harmless looking, their cold yellow eyes watching from beneath scaly hooded eyebrows.

They seemed of little consequence when for the first time the big cat came into view. I could not reach for the camera, not daring to move a muscle, not wanting to waste this chance to see the real jewel of India.

It seemed to stare right at me, and then its huge front legs bent and its back arched as it dropped its head. With its eyes fixed on me, it lapped with a huge pink tongue just like someone’s favorite pet cat at the refreshing water of the lake. It lifted its head to watch the crocs for just a moment and then satisfied that they were not a threat, it took another drink.

It was not a young animal, in fact, I thought I could see grey whiskers around its nose. Water dripped from its beard; with a sharp flick of its head the water was gone in a fine spray.

Slowly it backed out of sight. I stood watching the space it had left; mesmerised until the shrill call of a peacock proclaimed the show to be over. What a moment, of all the many memories and sights of my trips to India that will always be the best.

I wondered afterwards, had it seen me? Surely it did, perhaps if it went through the forest thinking what on earth was somebody from Yorkshire doing there, and had it missed its chance to taste a real Yorkshire pudding? 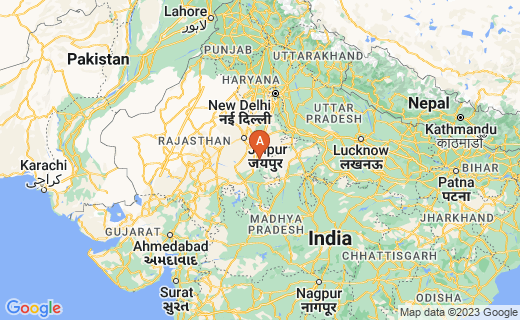