Up Close and Personal: Monte Albán (A Photo Journal)

I have covered Oaxaca City and two other places, "off the beaten path", but have not covered one of the major sites of Oaxaca, Monte Albán.

Whether or not you are an archaeologist is irrelevant to enjoy these ruins. Spectacular views from atop this plateau in the middle of the Valley of Oaxaca will render anyone speechless. 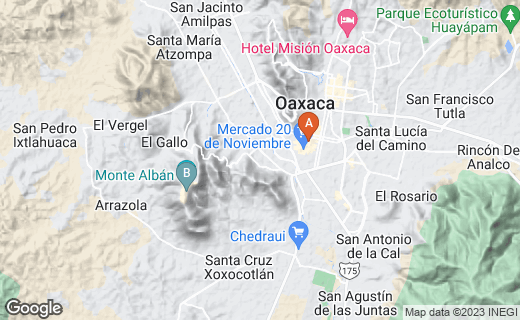 The ancient Zapotecs captial was one of the first cities in Mesoamerica. Archaeologist's have been debating weather or not it was one of the first cities to develop a market place. An area set aside for the purpose of offering goods to acquire other goods. As an Anthropologist that has written papers on these ruins and studied it during college, it was a must see on my places to visit in Mexico. Instead of taking the suggestions from people that have been to the site and my guidebook, I walked to the ruins.

I woke up with the rising sun one morning, had my breakfast, coffee, and headed out the door. According to my map, the site was 4 kilometers away, straight up a mountain. I wondered down countless roads taking in the sights and sounds of the waking city. I had not a care in the world. As I passed the zócalo, hundreds of police gathered in front of the adjacent cathedral preparing for the thousands of tourists who would fall upon the city for this holy week. After about a half hour of walking, I realized that I had yet to climb the infamous mountain the site sat upon. Never the less, I continued walking until eventually I found a sign that said, "Monte Albán 12 km." I shrugged my shoulders and followed the signs through various parts of the city few tourists walk (most have a car). I passed countless food vendors and little shops until I reached the curvy road which would lead me to the entrance of the site. About half way up the mountain a truck stopped and asked if I wanted a ride. I shook my head and politely declined. The truck took off with the people in the bed looking at me in disbelief while the driver was most likely thinking, "crazy gringo."

Monte Albán is a breath taking site which sits a top a plateau consisting of a North and South Platform. Buildings flank either side of the central lawn with three other buildings and an observatory in the middle. The site was inhabited from around 500 BC-750 or 1000 AD (depending on source) and went through various prehispanic periods (Middle Formative-Late Classic). Over this 1,500 year span, the site went through various phases in which buildings were constructed or expanded.

Many of the structures at Monte Albán contain evidence of Teothuacán influence through architecture and ceramics. This shows that trade (of goods or ideas) or even a migration took place.

(The video below was uploaded to youtube by SolTrekkers.)

The North Platform consists of four Temples, six Buildings (A, B, D, E, VG, and the Temple of Two Columns), and the Sunken Patio. Some tombs are located to the north. Underneath the structures on the North Platform are a labyrinth of under ground passages, possibly used by elites.

This platform is believed to have served as a residential area for elites or high-ranking nobles.

Building VG is the largest structure of the VG System (Buildings D, E, VG, and the Temple of Two Columns) and contained the remains of a noblewomen. The buildings are (starting from the north, moving in a clockwise direction) Building E, VG, D, and to the Temple of the Two Columns.

The Sunken Platform is located in the center complete with an altar in the middle. The most well known parts in this area of the ruins are the tombs.

Of the tombs, the most famous are 7 and 104. Tomb 104 (northwest of the North Platform) displays the Zapotec's mastery of art and adoration to the gods. Tomb 107 (northeast of the North Platform) is the most famous. Archaeologist found gold, amber, and jade (a precious turquoise stone), silver, alabaster, and bone tools. However, the tombs are not always open to the public.

The Main Plaza can be broken down into three separate groups: east, west and central groups. In total, there are nine Buildings (II, IV, G, H, I, M, N, O, P, and Q), the Temple of the Dancers, the Palace, three stelae (12, 13 and 18), the Observatory, the Ball Court, and an altar. There is a lot going on here, so lets look at the Main Plaza group by group:

The South Platform is dominated by the large temple located in its center. It also closes off the Main Plaza to the south. Several stelae were found here, but they have been moved to the National Museum of Anthropology in Mexico City. However, two stelae remain in this area of the ruins. In order to reach the summit of the South Platform, you must climb approximately 50 feet up a massive staircase.

From a tourist perspective, the South Platform doesn't have as much to offer as the other areas of Monte Albán. However, the panorama views of the valley are astounding.

When visiting the site, take your time going from place to place. This archaeological zone is massive. I spent about 3 hours wondering around the ruins and then another hour in the museum. Vendors outside (and sometimes inside) the site offer a wide variety of items that can be negotiated down to a reasonable price. Don't feel pressured into buying items sold in the gift shop. They can be rather pricey.

Books on Monte Albán and Mesoamerica

After Monte Albán: Transformation and Negotiation in Oaxaca, Mexico (Mesoamerican Worlds: From the Olmecs to the Danzantes (Hardcover))
Buy Now