Up Close and Personal: "Off The Beaten Path" In Oaxaca City, Mexico (A Photo Journal)

In Up Close and Personal: Oaxaca City, Oaxaca, Mexico, I covered some of the more popular tourist locations in the city. For this hub, its about two hidden spots. One is found within Oaxaca City (just outside the historic center) and the other is only a few kilometers away.

For those of you that like to go "off the beaten path", there are two places that I can think of that might grab your attention. One place is a train museum that also has some artists displaying their work. The other place is a short taxi ride (for about 10 pesos) to and from the ancient ruins. 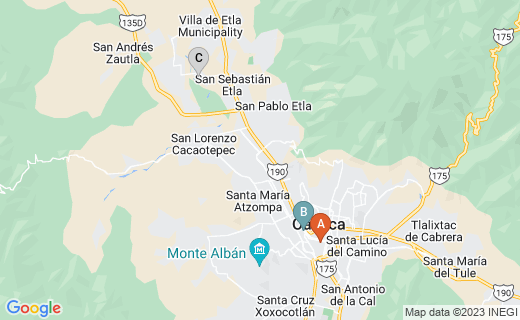 NOTE: NOT THE ACTUAL LOCATION OF THE SITE. IT IS FOUND JUST EAST OF THIS MARKER.

A worker at the hostel I was staying at introduced me to this place. It goes to show that putting in a little effort to get to know a person can lead to a hidden treasure. This train station turned museum was the defintion of Oaxaca.

As a friend and I apporached the entrance we saw what appeared to be a knight. Trees from the surrounding area had branches that reached out over the walkway providing shade from the hot Oaxacan sun. I snapped a picture of the knight and knew we were in for a treat.

The most intriguing aspect of this place was how it was morphed into so many things. It had modern art for sale, old train items, a place for kids to play (in an old train cart), and people expressing their political and social opinons through art. There was no one aspect of this place that was my favorite, it was all so cool.

A little court yard on the side provide further shade and a place to grab a drink of jamaica and horchata as well as various tacos. Jamaica is a traditional drink made from the jamaica flower and looks very similar to grape juice. Horchata is another traditional drink that can be made from rice or coconuts and is white. If you are ever given to the chance to try either drink, do it.

This site pre-dates Monte Albán and was the first sedentary village established in the Valley of Oaxaca. The average tourist and even some people that have lived and worked in the region have never been here. The site consists of a museum and some visible ancient ruins (most non-visible) located in a sleepy village.

To get here, walk or take a cab to the big market, Central de Abasto, and catch a cab around the 2nd class bus station (just north of the big market). Many places will tell you that buses are available, but my friend (who is from Mexico) and I couldn't find a place to buy a ticket at the 2nd class bus station. It is possible to just ask any taxi driver, but it might be more expensive. A friend and I paid 10 pesos each way. However, it wasn't a normal cab. The cab was so cheap because as the driver headed out to San José el Mogote, he continued to pick up people. It can get very packed in a five person car quickly. The driver then dropped us off at a corner (near the site) and we had to walk about 500 yards to get to the site museum.

The really cool thing about this site was most of it was free. The museum had a small fee (no more than 25 pesos), but the rest of the site was free. Not much of the site has been excavated. A lot of household archaeology has been done, but not much of the major structures have been revealed. Thats what I liked that about the site. It was exhilarating to see these structures covered in 2-3 feet of soil, grass, and trees and imagine that you are one of the first people discovering the area.

Also, spend sometime walking around the village. It is a friendly place that has some beautiful areas just itching for you to take pictures. The surrounding mountains truly make San José Mogote breathtaking.

When you are traveling around the world, within your country, or even in your hometown, try finding the beauty every place has to offer. Blogs and other travelers might tell you, "Don't go there because (insert negative comment here)." They might be right, but you will never know unless you try it out yourself.