My husband and I found V Hotel Phnom Penh on Expedia and between being eligible for a 55% discount and the positive reviews, decided it was worth booking for our three night stay in Phnom Penh, Cambodia in December 2016. And I'm happy to say that, for the most part, it was.

The hotel offers transportation, at an additional cost, to and from the airport. However, because we were arriving by shuttle and because we knew tuk tuks would cost much less, we didn't bother trying to arrange transportation through the hotel. Looking back, I don't know if I regret that or not as the hotel ended up being a little more difficult to find than I anticipated. Thankfully, I had loaded the hotel website on my phone earlier in the day when I had Wifi, which included the address and a map, and, our tuk tuk driver ended up stopping twice to ask for directions.

Before booking this hotel, be aware of its location. Although many tourist attractions are within a 15-20 minute walk, the hotel itself is not situated in the main downtown or tourist area. And despite tuk tuk drivers not always recognizing the hotel or street name getting a tuk tuk is easy - not only are they lined up outside the hotel at all hours of the day, but if you ask the hotel, they'll arrange a tuk tuk for you, using one of their trusted drivers. I didn't notice it until the last day, but there was a list of what a tuk tuk should cost from the hotel to all the major tourist spots. 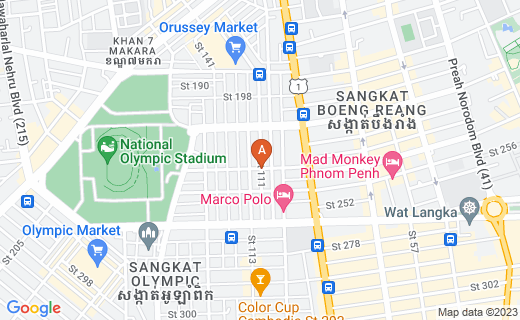 We arrived at the hotel an hour before check in was scheduled to begin. We knew an early check in might not be possible, but we were hoping to either grab lunch at the hotel restaurant or, at the very least, be able to store our luggage. Much to our delight, we were told our room was ready.

While checking in, we were told that we had been given a free upgrade. Months later, we still can't figure out what the upgrade was as the room we stayed in matched the description of the room we booked.

Our room was a nice size, in fact, it was probably more space than we needed.

Upon arrival, our room was clean and it remained clean throughout our stay. However, I could not, for the life of me, predict the housekeeping schedule. There was one day, it wasn't done until at least 3:30pm.

The air conditioning in the room worked fabulously and was much appreciated.

There is free Wifi. It wasn't the fastest in the world, but it wasn't awful.

Something else we noticed, but never addressed, was that our mini fridge was not plugged in, and we couldn't find an obvious outlet near it.

I found the bed to be quite comfortable. Unfortunately, my husband said that the pillows triggered his allergies and after the first night, he actually slept without a pillow.

When it comes to hotel toiletries, I'm usually quite fussy. Far too often they dry out my hair, they irritate my skin or they have a very bland and unappealing scent. That was not my experience at V Hotel Phnom Penh - I was especially fond of the shower gel and the shampoo.

As silly as it may sound, I loved the robes. Not only the color, which was a lovely change compared to the usual white that hotels offer, but they were truly comfortable. They also smelled and felt clean.

The shower had excellent water pressure and great water temperature, including consistent hot water. The only 'problem' was that water would sometimes leak out of the shower into the bathroom.

The hotel does have a rooftop pool.

Now, don't be fooled by my picture. As quiet as the hotel seemed, the pool and pool area were almost always busy, especially late morning through to mid-afternoon. My husband and I did notice that early in the morning or late in the afternoon and into the evening, it was typically much quieter and despite the lack of sun during these quieter times, we took advantage of this.

Despite the dust in the air and the nearby construction, the pool seemed very clean and had a lovely temperature.

For us, the real downside to our stay at V Hotel Phnom Penh was the construction next door, which I understand is not something I can blame the hotel for.

In addition to being quite loud by the pool area, the construction was right outside of our window and it started very early in the morning.

I know the hotel says their rooms are 'sound proof', but between the construction and hearing every conversation that went on in the hallway, I beg to differ.

My husband and I were both very happy with the food and service in the hotel restaurant, which we ended up frequenting more than expected, despite a city full of dining options.

Breakfast, which was included in our room price, was fine. In addition to the buffet, we were able to select an option from a breakfast menu - I loved their chicken noodle soup.

I loved ending each night of our stay up on the roof, overlooking the city with a drink in hand. However, bug spray was a necessity.

Because my biggest complaint about V Hotel Phnom Penh was the construction next door, I would not return or recommend booking a room here while that is ongoing. However, when that is complete, I would absolutely recommend this to others and consider booking here again. Overall, it is a nice hotel, the price is right and the staff were extremely friendly.