This is the third part of a three part series about our land and sea vacation in Australia and New Zealand. The first two installments can be read here:

Summary of parts one and two: We toured Australia's Outback by land and air, then boarded the Diamond Princess in Sydney for the cruise portion of our trip. Completing our Australia adventure, the ship made stops in Melbourne and Hobart, Tasmania.

What follows is the final part of our journey. 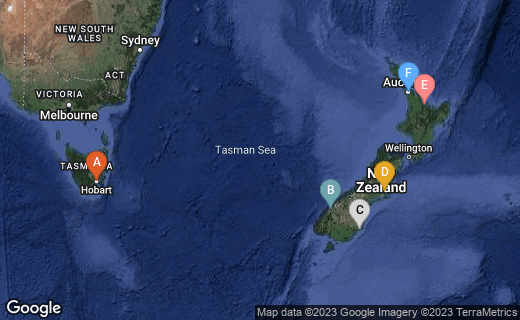 Two days after leaving Hobart, we arrived at New Zealand's Fiordland National Park. The previous evening, the captain had made an announcement that we should be on deck at 6 am to watch as the ship entered Milford Sound. He promised that the view would be beautiful. If anything, this was an understatement.

I made my way to the deck at 6 am as instructed. The morning air was surprisingly chilly, with low-lying clouds floating just above the water. After ten days of temperatures in excess of 90°F, an ocean breeze in the low 50's was bracing, if not welcomed. Passengers, many in hooded sweatshirts or wrapped in blankets, lined the railings on both sides of the massive ship. My first thought was "no way is this gigantic boat gonna fit into that tiny channel", but somehow it did.

As the ship slowly navigated the narrow channel, each turn brought another spectacular scene into view. I kept running between port and starboard to try to capture the mood with my camera. I literally have hundreds of shots and couldn't decide which ones to include, as all are worthy. I selected just a few that I hope will give you at least an idea of how beautiful this area is. You don't need to be an accomplished photographer to bring home some gorgeous photos from this trip. Just point and shoot.

The ship spent the entire day meandering through the fiords of Milford and Thompson Sound. From lush green foothills, to craggy, snow-covered mountains, to breathtaking waterfalls, the views evoked a sense that you were witnessing earth at the dawn of time.

Sailing through the mountains

As the day warmed up, passengers settled into their normal routines, though it seemed that the ship was sailing through the mountains, instead of over the seas.

Sitting on your balcony with a glass of New Zealand sauvignon blanc in hand while jagged mountains go by, is an extraordinarily civilized way to spend an afternoon. I highly recommend it.

Dunedin and the Taieri Gorge Railway

After sailing through the night, our ship arrived at Dunedin. Our excursions for the day included a ride on the Taieri Gorge Railway and a trip to New Zealand's only castle,

We debarked the Diamond Princess and boarded the Taieri Gorge train, which was just a short walk away. This is a very old, rickety, wooden train that makes its way through the mountains and over deep gorges in a scary but exhilarating way. It snakes around bends, through hand-cut tunnels, and crosses some pretty old viaducts and trestles. The scenery along the way is lovely and a nice lunch is served. For the most enjoyment, stand outside on the platform between train cars. You'll really get a sense of how far down it is to the river and how close to the edge of the cliff the train is. If you're overly concerned with safety, you may want to stay inside the train.

The last stop for us on the Taieri Gorge Railway was Dunedin Station. Here we boarded a sightseeing bus to Larnach Castle. It's known as the only castle in New Zealand, but it's really not a castle in the traditional sense, but is an interesting mansion. The mansion sits high on a mountaintop about 20 minutes from Dunedin. The view from the bus as it moves up the mountain, quite close to the edge of a long, steep precipice, is reminiscent of a scene you might expect to see while on an airplane. From this height you can easily make out that Dunedin sits inside what once was the crater of a volcano.

The mansion is quite nice, but I found the history of the family who built it to be the best part of the tour. Let's just say that 33 was not a good age for William Larnach's wives, and wife number three (the nanny) seems to have had the last laugh.

The gardens surrounding the castle are beautiful as are the views of the harbor.

Christchurch and Punting on the Avon

Our next port of call in New Zealand was the city of Christchurch. With the Princess docked in Lyttelton Harbour, our tour bus took us to the center of Christchurch for our Punting on the Avon excursion. The Avon is the river which flows through the center of the city and through some serene public parks. A punt is a small flat-bottom boat that is propelled using a pole to push the boat through the shallow water. Apparently a striped sport coat and straw hat are required as well. It was a pleasant but short experience and lasted about 30 minutes.

A trolley ride around town

Next up was a ride around Christchurch in a trolley. Sparkling wine and tea sandwiches were served as the car made the rounds of the city center. It was an interesting ride, though the seating was rather tight. If you are the least bit claustrophobic or have a waistline larger than 36 inches, I would skip this ride. After lunch, the trolley dropped us off at Victoria Park.

We were free to enjoy Christchurch on our own for the rest of the afternoon. The weather was beautiful and a Busker's Convention was in town. Buskers are street performers, and there were all kinds of entertainers roaming the grounds of Victoria Park and Cathedral Square, while food vendors hawked festival fare. It was a very festive atmosphere which we enjoyed immensely. I am greatly saddened by the damage and loss of life that occurred there just a month later, when an earthquake of magnitude 6.1 damaged or destroyed about a third of the buildings in the central business district. The quake, which occurred during the middle of a business day, killed 181 people and injured many more. The iconic Christchurch Cathedral was severely damaged and suffered a partial collapse.

With the ship docked in Tauranga Harbour, we headed to the Kahikatea Maori School for our introduction to Maori culture. The school aims to preserve the Maori culture, language, and history for future generations. We didn't know what to expect when we got off the bus. Once inside the school we were treated to traditional Maori songs performed by the students. The wonderful harmony and enthusiasm was a pleasure to see and hear. The students very quickly put everyone at ease and coaxed audience members to join in. They taught us a traditional song (in English) and some cool dance moves. It was great fun.

Next on the agenda was a trip to the Maori Cultural Center. A Maori woman boarded our bus to guide us through a very elaborate set of protocols that we needed to follow so that we would be accepted by the tribe. The consequences of not learning the rituals weren't explained to us, but being an astute student of tribal cultures (not really) I figured they would not be good.

We needed to elect a chief to represent our bus and learn a song in the Maori language. There were also strict rules to how we lined up once we were off the bus. Our chief would go first, followed by the women, and then the men. If we had ulterior motives, our chief and our women apparently would get whacked. This seems like an effective way to deter violence by visitors.

Our chief and the warrior

When we arrived, our chief left the bus and stepped into the entrance of the village. A Maori warrior, complete with spear, game-face, and impressive tattoos approached. Eyes bulging, tongue pointing, and spear poised, he placed a flower on the path, then backed off. Our brave chief slowly went forward and graciously accepted the offering and bowed his head. Our chief and the warrior embraced and touched foreheads, which indicated that it was safe for us to leave the bus. With our chief leading the way, and the women close behind, we guys bravely closed the ranks. As a group, we walked into the cultural center.

Getting to know the Maori

After several speeches (in Maori) a translator explained that this wasn't a show solely put on for tourists. but the actual way the Maori conduct business. After the speeches, we lined up and the tribe members welcomed each visitor individually by touching foreheads. I'm not a touchy-feely kind of guy, but I found the entire ceremony to be quite moving. Our initial apprehension vanished as we learned more about their culture and customs. After the ceremonies, we went to an assembly hall for refreshments. Maori handicrafts were available for purchase. Before heading back to the ship, we stopped to view a Kiwi orchard that was owned by our guide.

The Diamond Princess pulled into Auckland and our cruise was over. We booked a hotel for the night rather than leave without seeing at least a little bit of the city. Auckland is a nice, modern city with kind of a hip feel. I'm guessing that people who live there are in pretty good shape because some sections are quite hilly. Queens Street is home to high-end and trendy shops. The Sky Tower is about 1,000 feet tall and is a major attraction. Besides restaurants and shops, you can strap on a harness and walk on top of the structure, or slip on a cable and jump off if you're so inclined. I'm not so inclined. Public transportation is inexpensive and will take you just about any place you would want to go. I wish I had more time to spend in Auckland, but it was time to head home.

It was a wonderful, once-in-a-lifetime trip that started in Sydney, Australia and ended in Auckland, New Zealand. Along the way we saw spectacular scenery and met some interesting people. You can't help but be changed by a journey like this.