When people visit northern England and want to see a magnificently landscaped property, they can visit Alnwick Castle. It is known as one of the most beautiful attractions in northern England. Visitors who come here are able to take in acres of impressive colorful plants. There are expertly manicured topiaries as well as rows of beautiful flowers and cascading fountains. It has a museum, a tree house, restaurant and other attractions. When people go to Alnwick Castle, they are able to do more than just take in the splendor of well-kept landscaping. There is area unique place hidden behind iron gates. It's a place where visitors are advised to not smell the flowers because doing this could be harmful to their health. This is the home of the Poison Garden and where over 100 poisonous plants are maintained.

Northumberland is a county in the northeast section of England. It extends to the border with Scotland. After getting married in 1979, Jane and Ralph Percy lived in Alnwick Castle. Ralph soon became the 12th Duke of Northumberland after the death of his older brother in 1995. This event led to Jane becoming the Duchess of Northumberland. She was asked by her husband to do something with the Castle gardens. A landscape architect was hired by Percy in 1996. The Alnwick Castle gardens now include 14 acres of very impressive landscaping. Hundreds of thousands of individuals go to see it each year. It is known as one of the most visited tourist attractions in Northern England. This is a castle that has been featured in many movies and television shows. It was featured in a number of movies such as the first two Harry Potter movies and more. Episodes of television shows such as Downtown Abby, the Antiques Road Show, Ellen DeGeneres Show and others have been filmed at Alnwick Castle.

Jane Percy decided to dedicate herself into renovating the castle's landscaping. The once stunning ground and formal gardens were suffering from a lack of attention. Much of the land next to the castle was being used for lumber. A few years after Jane Percy's started her garden renovation project, the results of her efforts were evident. Acres of commercial spruce trees were changed into stunning gardens. There are now thousands of roses, bright tulips, a stunning bamboo labyrinth, tunnels of green vines, flowering cherries and more. There are sculptures that are also fountains. Visitors can sit outside and watch a monumental cascade from a contemporary glass pavilion and more.

Jane Percy initially had many different ideas on what she wanted to do with the castle gardens when she started. Her goal was to build something really different. A trip to Italy gave her an idea. She visited the well-known Medici poison garden and became excited at the possibility of having a garden of plants that could kill a person. She also took a trip to an archeological site in Scotland. It there she was able to see and experience what had been the largest hospital in medieval Scotland. This is where she learned about how hemlock and opium were utilized with soporific sponges as anesthesia for surgeries and other plants used for medicinal purposes.

After this experience, Jane Percy began the work of collecting poisonous plants for her Poison Garden. She initially chose 100 different varieties of poisonous plants that were able to take root in the garden. The one requirement for any plant selected is that is had to tell a good story. Percy is often fascinated by how most people don't know that many plants common in England can be highly toxic. One of them is laurel hedge. People have unknowingly filled their vehicles with this plant for a gardening project. They've later been overcome by the toxic fumes emitted by the plant's branches.

Since the plants growing in the Poison Garden are dangerous, visitors must follow the posted restrictions during their visit. There is no touching, tasting or smelling of any of the plants at any time. There are individuals who have toured the garden and not followed the restrictions. They've been overwhelmed by inhaling toxic fumes from plants as well as getting too close to them. No one has died after touring the Poison Garden. Every year some people will ignore the restrictions and may faint. In most cases, people recover quickly when they leave the garden.

This is known as the largest and best tree house in Europe. The tree house at Alnwick Castle covers over 6,000 square feet. It is a place where fantasy meets the latest technology. The structure was built around 16 mature lime trees. It was designed so the trees are able to continue growing without any restriction from the tree house. The wooden interior has a huge fireplace that is 60 feet above the ground. Inside the tree house is a welcoming restaurant. There are trees growing through the floor. All the furniture a visitor will experience has been handcrafted. There are screens that have been created from fallen branches and more.

In 1826, the Alnwick Castle Museum was opened to the public. At the time, the 3rd Duke of Northumberland made it part of his restoration efforts for the castle. It has a very significant collection of British and Irish archeology. This includes such things as small shields known as bucklers, swords and more from the 1400s. It also provides stories and impressive exhibitions based on real individuals from history. These people have been created from the surviving records concerning them. Equipment, accouterments from the history of the castle and more are also on display in the castle's museum. 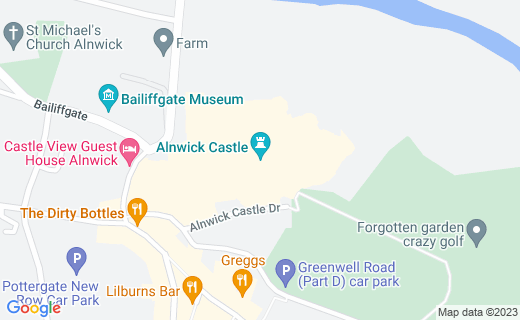