There is a place designed to teach children and adults about space. It is located in Huntsville, Alabama and is called United State Space Camp. The camp and all the programs associated with it are owned and operated by the Alabama Space Science Exhibit Commission. People who visit here can participate in camps with aircraft, spacecraft as well as aviation and others. Many exhibits have been designed to promote learning about engineering, science, space exploration, aviation and more.

The United States Space Camp began operating in 1982. It provides science education for people of all ages. The programs were designed to encourage children to better understand science and math as well as the world of space exploration. Wernher von Braun was a German aerospace engineer and space architect. He invented the V-2 Rocket and Saturn-V rocket. Many people refer to him as the Father of Rocket Science. In 1977, von Braun met with Edward O. Buckbee while visiting the U.S. Space and Rocket Center. Buckbee had been part of the American space program starting in 1959. Von Braun noticed how interested children who visited the U.S. Space and Rocket Center were when it came to the rockets. The children were making notes and carefully studied the rockets. The two talked about how there were cheerleader camps as well as band camps and others for kids. They felt it was time to create a camp based on science. The United States Space Camp was created. It is estimated that over half a million individuals have attended the programs provided. The United States Space Camp has a number of programs for both children and adults that can last for several days.

There are a number of different simulators people can experience at the United States Space Camp. There is Space Shot. People are able to go 140 feet straight up in 2.5 seconds. Individuals experience 4 Gs of force and are weightless for 3 seconds before then experiencing a 1 G free fall. There is G-Force Accelerator. People on this simulator are able to experience three times the force of gravity. They learn what it's like to have 3 Gs of force pushing on their body. It will also test a person's strength as they can push against the centripetal force. There is Kids Cosmos Energy Depletion Zone. Children can crawl around in a recreation of the International Space Station. There is the Mars Climbing Wall. This enables people to climb the wall and make it to the top of the Milky Way's largest volcano known as Olympus Mons.

There are a number of different exhibits available for visitors to experience at the United States Space Camp. There is Robot Zoo. This is a 5,000 square foot exhibit designed to show the fascinating world of a master engineer. It provides a number of robot animals to see as well as a dozen hands-on activities. Visitors learn about how a chameleon changes colors, giant squids move as well as how flies can walk on ceilings. Cutaways make it possible to look at the interior of the robot exhibits and see machine parts operating. There is also 101 Rocket City Inventions. This exhibit was made to showcase the creative genius that made it possible for a man to be sent to the moon. It shows the creative culture of Huntsville. People are able to understand how this place that invented and created so many innovative space products as well as technologies and services. There is Science Fiction, Science Future. This exhibit makes it possible for guests to gain a better understanding of how ideas found in science fiction can be turned into science reality. It is a hand-on experience that involves robots, mind control, holograms, invisibility and more.

Children between the ages of 9 and 11 are able to attend Space Camp. The program is designed to run between three and six days. The activities children participate in during Space Camp are intended to be educational as well as entertaining. The children who participate in Space Camp are able to choose three different tracts. This will determine their activities and what they study during their time at Space Camp. A tract could involve everything from robotics, space as well as aviation and more. The camp activities take place among actual rockets and shuttles. They will be able to see the Earth from the eyes of an astronaut when seeing films at the IMAX Spacedone and more.

This program is designed for children between the ages of 12 and 14. It is considered an adventure that last for five nights and is educational as well as exciting. The program makes it possible for participants to face real-world scientific applications. They will be able to learn about engineering, science, math and technology. Space Academy participants experience hands-on activities that enable them to learn about future generations of lunar explorers. They are able to work as spacecraft designers, mission controllers as well as astronauts. Participants take simulated moon walks in the 1/6th gravity chair. This enables them to learn about working in a frictionless environment. There is also the building of two-stage model rockets and launching them. Teamwork and management skills are also developed during the leadership reaction course. Participants obtain knowledge on the many aspects of modern spaceflights.

Participants are from 15 to 18 years old. They experience scuba-based space life. The Underwater Astronaut Trainer provides microgravity orientation. There is a focus on technology, science, math and engineering at a college level. People are able to learn about the physical demands of technologists, engineers as well as astronauts. The Advanced Space Academy program is a college-level accredited program through the University of Alabama in Huntsville. Upon successful completion of this program, students are awarded freshman-level general science college credit. Information is provided to program participants on how the college credit they earn can be transferred to another college or made part of their official high school transcript. Once this five-night program is complete, students can apply to participate in the 12-night camp. This camp is highly selective, and participants must be invited to attend it.

It is common for adults to see all the things children participate in at the United States Space Academy and be a bit envious. There is now an Adult Space Academy program available for adults of any age. Participants are able to spend two nights at the United States Space Camp and engage in hands-on, interactive simulated space missions. They will be able to have the experience of training to be an astronaut. Model rockets are constructed and launched. Adults are able to experience the variety of simulators available. They also learn about spaceflight history and see one of the largest collection of spaceflight items in the world. 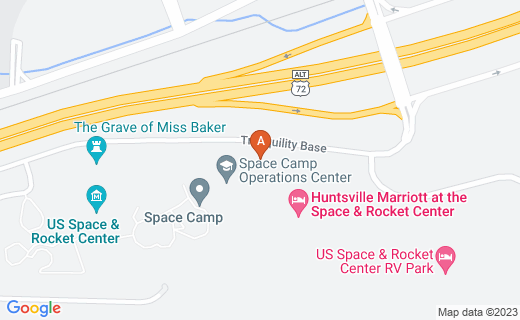