There is a unique mansion located in San Jose, California open for public viewing. It is called the Winchester Mystery House. This mansion was once the home of Sara Winchester. She was the widow of William Winchester. William was the son of Oliver Winchester, who was known for manufacturing and marketing the well-known Winchester repeating rifle. William and Sarah also had a daughter who passed away in 1866 by a mysterious childhood disease known as marasmus.

The Winchester Mystery House is a Queen Anne Victorian style mansion. It is recognized for its size as well as architectural oddities. What sets it a part from other mansions is how it was constructed. There was no master building plan used for its construction. The mansion is a California historical landmark as well as on the National Register of Historic Places. The Winchester Mystery House is privately owned and a popular place for tourists to visit.

When Sarah Winchester's husband passed away in 1881, she inherited over $20 million. Sarah also was given approximately half ownership in the Winchester Repeating Arms Company. This translated into Sarah Winchester having an income of around $2,000 per day. It's estimated this would equal $30,000 a day of income in 2012 money value. According to newspapers at the time, Sarah Winchester heard from a medium in Boston. The medium is alleged to have told Sarah her late husband William Winchester was trying to contact her. He wanted Sarah to leave their home in Connecticut and go west. She must then construct a home for herself and all the spirits of people who had been killed by a Winchester rifle. Sarah firmly believed the family fortune she had inherited was haunted by ghosts. She felt moving west and building a house was the only way she would be able to placate the angry spirits.

Sarah Winchester purchased a large unfinished farmhouse and a large parcel of land just a few miles away from the city of San Jose in 1884. It was a beautiful and serene place. She started construction of the mansion immediately. The building of it would continue for the next thirty-eight years. Carpenters and other construction workers were hired to work in shifts. The work took place every hour of every day. When the turn of the century arrived, the home was a mansion with seven stories. The estate had acres of farmland. There were orchards of walnut trees, plums as well as apricots. Sarah Winchester also owned homes in Palo Alto, Atherton as well as Los Altos, California. During the mansion's construction architects were not used. A building inspector was not even utilized to check the construction work for safety. The design and building of the mansion were done in a haphazard fashion. This resulted in it having a number of odd features. It contains stairs or doors that go nowhere. There are windows built to overlook other rooms. Stairs were made with risers of strange sizes. Many people blamed the mansion's oddities to Sarah Winchester's strong belief in spirits haunting it. Some refer to the mansion as the house built by the spirits.

Once the work was completed on a specific room, the best possible furnishing were placed in it. Sarah Winchester liked pretty things and had good taste when it came to furnishings. Trains pulling freight cars filled with silver and gold plated chandeliers as well as Tiffany art glass windows, silver and bronze inlaid doors, Swiss, molded bathtubs and more arrived regularly to San Jose. Everything was taken to the house, but much of it was never installed. When Sara Winchester passed away in 1922, there were several rooms of valuable furnishings waiting to be placed somewhere in the home.

It is said that the every day there was construction at the Winchester House. It started with Sarah Winchester's nightly seance. This was to help her figure out the plans for the next day's construction work and to protect her from bad spirits. All the work was done by simple sketches of ideas from Sara Winchester. In the morning, she would meet with her foreman John Hansen. He would try and make her ideas into reality. Rooms could be built one week, and then torn down and rebuilt the next. It is estimated between 500 and 600 rooms built were built in the house. It is difficult to get an exact count since so many rooms were torn down and redone. It's currently estimated that 160 rooms remain at the mansion.

The mansion has impressive art glass windows made to order in Austria and imported by Tiffany's of New York. They were superbly designed with concave and convex glass frames as well as inset with glittering jewels.

The mansion is large and has forty-seven fireplaces. There are seventeen chimneys. The windows are designed to permit sunlight to stream in the rooms. There were also hot air registers that produced heat from coal furnaces.

The Winchester House has an elegant Grand Ballroom constructed with almost no nails. It has a silver chandelier from Germany. There are two stained glass windows quotes inscribed on them from Shakespeare. It is believed the ballroom was never used to host a ball.

The Winchester Mansion's gardens were designed with Victorian style geometric designs. The front yard is impressive having a number of exotic plants as well as brightly colored flowers such as roses and others. Sarah Winchester would often refer to a book about horticulture when deciding on what plants to use. The book was written by A.J. Downing and published in 1841. The grounds around the mansion also have a number of medicinal plants.

The mansion's exterior received as much attention as the inside. It has Queen Anne Victorian architecture features. There are curved walls, turrets, cornices as well as balconies and more. There are even ornamental spires that give the mansion the appearance of a castle.

She created a number of rumors in the local community. Sarah Winchester was generous with her workers paying them double the going rate for their work. Many local charities regularly received anonymous contributions that were generous. She was known for always having her face covered by a dark veil and fired servants who saw her face even if by accident. Sarah Winchester never slept in the same room two nights in a row. She would wear one of 13 special colored robes when she was in the Blue Room. This is where she would attempt to talk with the spirits. The room had a planchette board, a device used to speak with spirits. There was also a pen, paper, desk and closet in the Blue Room. It was very sparsely furnished when compared to the rest of the home.

She died on September 5, 1922, from heart failure. Sarah Winchester was buried in Connecticut at Evergreen Cemetery next to her husband. When she died, the Winchester House had 160 rooms, over 1,999 doors and more than 9,900 windows. It also contained 47 fireplaces, 47 stairways, more than a dozen bathrooms and approximately six kitchens.

There are a number of tours a visitor can choose from to see the Winchester Mystery House. 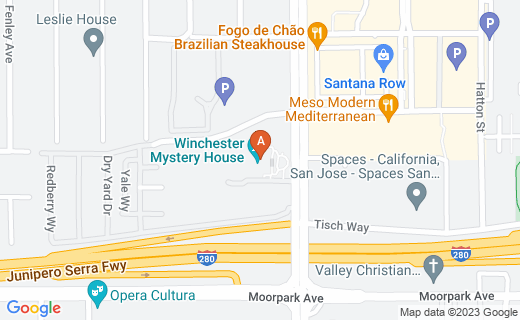