The Museum of Contemporary Native Arts was founded in 1991. At that time, it was known as the Institute of American Indian Arts (IAIA) Museum. It is located in Santa Fe, New Mexico and is the only museum in the world that provides work based on contemporary intertribal Native America Art. The building where the Museum of Contemporary Native Arts is located is the former Santa Fe Federal Building. It is also known as the historic old Post Office. It is a landmark building made in the Pueblo Revival style. It is listed on the National Register of Historic Places. The museum is known for showcasing impressive works of art by Native artists. Visitors are able to view thousands of pieces of art that are part of the National Collection of Contemporary Indian Art.

The Museum is dedicated to raising the level of public awareness when it comes to appreciating and understanding contemporary Native American art. It provides a way for visitors to know the history and culture of the art and artist. The museum makes it possible for visitors to see presentations, exhibitions as well as acquisitions and valuable interpretations of the artwork. The museum is recognized around the world as a place that displays the diverse and stunning art practices of North American Natives. It provides unique opportunities for people to experience the work of artists and develop a cross-cultural appreciation of the Native American artwork at a local, national as well as international level.

The art collection of the Institute of American Indian Arts’ (IAIA) began with a student honors program. Outside artists, as well as private collectors and more, helped with donations. This provided that basis for the creation of the museum, which was started in 1972. Initially, the museum's exhibits were only able to be displayed at a location on the Santa Fe Indian School Campus. Many pieces of art were left in storage since there wasn’t enough room to display them. The ability to put artwork on display and provide a variety of museum activities was made possible in 1990 when the IAIA was able to acquire the former Federal Building located in Santa Fe.

The former Federal Building had experienced years of neglect. Turning it into a building able to display American Native artwork was a serious challenge. The building was a 1922 Pueblo Revival-style structure. Architects were able to restore its exterior to its former impressive appearance. The entire interior of the building was remodeled. Transitional galleries were created as well as classrooms installed for the study of art. A number of galleries were built that were designed to specifically display the museum's impressive National Collection of Contemporary Native Art.

The IAIA Museum officially moved into the former Federal Building in 1992. After the extensive renovations, it was now a new and exciting place for Native American artwork. It opened in 2004 and then reopened in 2005 as a place for visitors to see unique pieces of art as well as experience educational programs and more.

The Museum of Contemporary Native Arts is known around the world as the premier collection of art created by Native Americans as well as First Nations and Indigenous peoples. The collection found at the museum is often referred to as the National Collection of Contemporary Native American Art. It is estimated that there are over 7,400 pieces of art included in the museum's collection. There are many different forms of art available for viewing. There is everything from photography to contemporary apparel, ceramics, sculptures, cultural arts as well as textiles and new media. Many well-known artists such as Tony Abeyta, George Morrison, Truman Lowe and many others have their work on display at the museum.

This is where the Loren and Anne Kieve Gallery is located. This has provided a variety of impressive contemporary art exhibits from national and international sources. The art exhibited in this gallery is rotated twice a year. A display will be there from January to July, and then a new one from August to December. Loren Kieve is a Cherokee and is one of the museum's trustees.

The gallery is named after Lloyd Kiva New. He was born on February 18, 1916, in Oklahoma. New was of Scotch-Irish and Cherokee descent. In 1938, he graduated from the Art Institute of Chicago. During World War II, Kiva New served with the U.S. Navy. In Arizona, he was part of the Southwest Indian Arts Project. Kiva New co-founded the Institute of American Indian Arts at the University of Arizona. He served a number of important roles including museum president. In 2002, Lloyd Kiva New passed away.

The museum's storage has a gallery used specifically for the Robert and Barbara Ells Family Collection Gallery. This is done to remember their dedicated financial support and hard work to transport artwork of the National Collection of Contemporary Native Arts to its current location. There are exhibits on display in the museum that regularly feature artwork from this collection. Visitors are also able to view the entire Robert and Barbara Ells Family collection in its storage space. People who want to see the collection do not have to schedule an appointment. When special appointments are made, a member of the museum's staff can provide information about the artwork collection.

Allan Houser is considered to be a highly skilled Native American painter. His parents were Sam and Blossom Haozous. They were part of the Chiricahua Apache tribe from Oklahoma. He was known as a Modernist sculptor. Houser passed away in 1994 but left behind over 5,000 pieces of his artwork. His creations included sculptures, paintings and more. Houser was an instructor for the Institute of American Indian Arts.

Born in 1937, Fritz Scholder was an enrolled member of the Luiseno tribe. Fritz was a dedicated student of Oscar Howe, a famous Sioux artist. After completing the program for a master of fine arts in 1964 from the University of Arizona, Scholder pursued a career in art. The most popular artwork of Fritz Scholder provides insight, as well as strong commentary, concerning the publicly accepted stereotypes of Native Americans. Scholder taught contemporary art history as well as advanced painting at the Institute of American Indian Arts. Fritz Scholder passed away in 2005.

Monday, and Wednesday through Saturday 10 am to 5 pm

Sunday from Noon until 5 pm.

Location of the Museum of Contemporary Native Arts 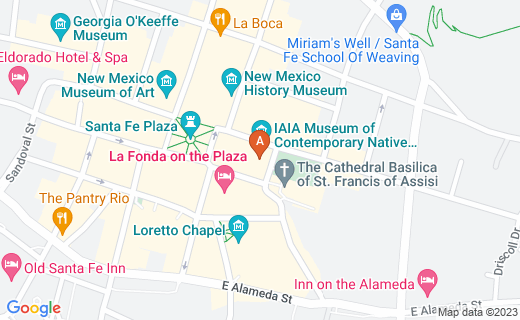