One of the small Cambridge Colleges

Among the more modern colleges of Cambridge University, there is yet a very great variety in terms of architecture and size. Whereas, for example, Churchill College is almost overpowering in its monumentality, another college, Clare Hall, is on a much smaller and intimate scale. Regarding the make-up of its body of scholars, Clare Hall is noted for its complete absence of undergraduates; indeed, the College has the highest fellow to student ratio at Cambridge University.

The College's North American links are strong. The Ford Foundation and the Old Dominican Trust in America have been major benefactors.

Architect Ralph Erskine designed some of the modern buildings at Clare Hall, in particular, the East, Central and West Strips, which are partly sunken into the ground; he has been described as an avowed egalitarian, and this spirit is said to pervade the buildings, made of brick and timber boarding, for which he was responsible. While there may certainly be an element of truth in this, what I think must also apply is a sense of commonality of scholarly purpose among the more mature residents, given the absence of undergraduates. The college is known to make overseas visitors, and postgraduate students and holders of fellowships with families, particularly welcome. What a long way Cambridge scholarly life has come from the days when Fellows of colleges who married were expected to resign!

The arms of Clare Hall — in red, yellow and black — are discernibly derived from those of Clare College (1), which was responsible for the original foundation. Clare Hall is today, however, an independent, constituent college of the University.

Founded in 1966, Clare Hall in a number of respects radiates (in my humble opinion) a sense of maturity. Thus, for a number of reasons, maturity may arguably be said to provide a leitmotif for the College. In the first place, the maturity of the scholars is evident, since its residents do not need to contend with any undergraduate exuberance (One does not have to be a conservative to be able to empathize at least with what Edmund Burke meant by his idea of 'the late, ripe fruit of mere experience'.) Then there is the fact that the College incorporates Elmside, a striking, circa 1885 Arts and Crafts building on Grange Road, with a tile-hung upper storey and a peaceful, enclosed rear garden; this also brings me to another aspect of the same leitmotif: the maturity of its trees. All these similar — or dissimilar — kinds of maturity which are avowedly present at Clare Hall are such that they arguably bring with them an inexorable sense of serenity and peace in this small college.

The location of the College also contributes to the particular peacefulness of its setting. With its main entrance on Herschel Road, off Grange Road, on the western side of the University area, the College enjoys an added advantage in that the University Library is situated close by. The resident or visitor to the College will find few tourists, although it may be said that in terms of architectural interest, the tourist interested in architectural history would find the Arts and Crafts features of Elmside, 49 Grange Road, as well as the Erskine buildings, to be inherently stimulating. This building — constructed long before the College's foundation in the next century — is attributed to E. S. Prior, who was also responsible for Henry Martyn Hall (1887), in Market Street, Cambridge, and the Cambridge Medical School Building (1899).

Nobel Prizewinners Ivar Giaever (shared, for Physics, 1973) and Joseph Brodsky (for Literature, 1987) held fellowships at Clare Hall. The head of the College is known as the President (2) and the founding President, physicist Brian Pippard, supervised the thesis of B D Josephson, who also shared the Nobel Prize in Physics in 1973.

(2) Among the Cambridge Colleges, the title given to their respective heads varies significantly. Like Clare Hall, Queens' College has a President; Trinity and Churchill Colleges and several others have a Master; King's College is headed by a Provost.

In Cambridge itself, among its ancient Colleges are King's, Clare, Trinity, and St. John's, all of which have gardens on The Backs, on the Cam River.

Ely (distance: 26 kilometres) has a striking Cathedral, a landmark over the surrounding countriside for hundreds of years.

United Airlines flies from New York Newark Airport to London Heathrow Airport, where car rental is available. Rail services link Cambridge with London's Liverpool Street and St Pancras railroad stations. Please note that some facilities may be withdrawn, without notice. Please check with the airline or your travel agent for up to date information. 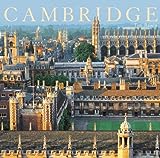 Cambridge
This book by Tim Rawle has run through several editions, and deservedly so. Its useful index links various aspects of the College's and other buildings in Cambridge in terms of their history and styles. I have spent many hours reading this book and appreciating its photos.
Buy Now