Guyana may not be top of everybody's holiday bucket list but it's an interesting destination with a great record on maintaining its virtually intact tropical rainforest. I spent a few weeks at the Pegasus Hotel in the Guyana capital of Georgetown in 2012 and was fascinated by its culture and history.

Guyana is a former Dutch and British colony and has an abundance of historic wooden buildings to reflect this heritage. The hour-long journey from the airport to Georgetown gives ample opportunity to look at some of these buildings, many now owned by wealthy Asians and complete with ornate decorations and statues that are testament to the owners' Hindu beliefs. There are three distinct cultures apparent in Georgetown, the native Amerindian population, Asians descended from some of the colonizers bought in by the British and black people who are descended from the former slave population.

I suppose the most noteworthy aspects to my Georgetown visit that made greatest impact were the singing frogs in the evening and the tropical storms and downpours. The constant background noise from these tiny frogs was apparent everywhere. Of course, I was staying in a tropical country but I didn't realize just how frequent the rains would be, nor their strength. The weather could change from beating sun to instant deluge in a jiffy and it only took a matter of moments for pools of water to form. Many of the locals carried umbrellas around all the time, they make great sunshades as well as giving a little protection from downpours. 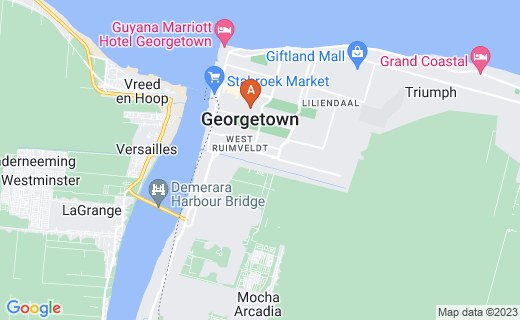 What did you think of Georgetown, Guyana?

Making unaccompanied trips on foot around Georgetown may not be the safest idea for tourists, with their apparent wealth. Many of the people live in extreme poverty, so violence and robbery is endemic. There are a number of no-go ghetto areas around town and I noticed a lot of locals didn't even seem to own a pair of shoes. Taxi cabs are the best way to get around town and this form of transportation works out very cheap with short trips costing a couple of Guyana dollars only.

I did take a couple of strolls from the hotel up the main street to the area around the wooden cathedral, St George's. But on both occasions the church was closed so I was unable to get inside. This landmark building is completely fabricated from wood and said to be the tallest wooden church in the world. It has a lookout tower at the top which is where the English wives used to watch out for the return of their seafaring husbands. Wandering up High Street towards the cathedral, there's a fantastic house with lush ornamental garden situated on the left-hand side. I stopped to take a peek into the garden from the pathway and was a little disconcerted to be approached by a rifle-wielding guard. Apparently it was the official residence of the President, so no wonder the garden was so pretty.There's a decent cafeteria/snack bar halfway up High Street selling icecreams and the biggest Angel cakes I've ever seen. I guess they acquired the recipe from their English colonizers and I often purchased a couple of pieces so I could take English tea back at my hotel. An interesting native structure that's close to the Pegasus Hotel is the Umana Yana meeting place. It's a thatched building that was created to form a meeting place for native Amerindian gatherings and, although there are guards at the perimeter, it's possible to stroll inside and take a look around when the meeting room is not in use.

The traditional Stabroek Market is a vibrant place to visit. It's where many of the locals go daily to buy their fresh fruits, vegetables and meats but there's also a variety of domestic, household and gift items on sale. I managed to pick up three pairs of Converse at bargain basement prices from the market, though my kids try to convince me they're fakes! You can take a cab up to the market and there are numerous taxis lined up outside ready and willing to take you back to hotels or accommodation. Actually the drivers are a bit of nuisance as they try to tout for business from the moment a tourist arrives on the scene.

Is malaria a problem?

Much of Georgetown is crisscrossed by what's euphemistically termed canals. They're not canals as we Brits might expect, but shallow drainage culverts that help to handle some of the constant flooding in the area. Malaria is not a problem in Georgetown itself as I believe some kind of mosquito predators are released into the canals and handle mosquito problems in the area around Georgetown.

Georgetown visitors during the last few days of July and early August will be able to enjoy the Emancipation Day celebrations in the local National Park. It's a fantastic day out celebrating the emancipation of the slaves, with stalls, food and live music in the arena. Locals throng to the park dressed in colourful traditional dress and celebrations continue into the early hours of the following day. The ponds in the park have some pretty cool manatee inhabitants too, they'll eat grass or other delicacies from your hand.

Manatees in the park!

The principal reason I visited Guyana was so I could get to see the rainforest in real life. I visited the Kaietaur waterfall and a number of images are shown below:

I guess the main disappointment to my Georgetown trip was lack of attractive beaches or seaside scenery. The drawback to the fast-flowing rivers is the amount of mud and forest detritus that's carried downstream. Georgetown is situated by the sea but it's a brownish-looking sludge of a sea and beach landscape due to the speed of water flow. I'd certainly recommend Guyana as an ideal place for English visitors looking for eco-tours, wildlife or bird watchers or anybody wanting to experience the wonders of the rainforest.