Visiting the Anglican Church in Ypres, Belgium: remembering the Commonwealth Fallen of World War One

Solemn associations with World War One

Ypres (1), Belgium, has an Anglican church.

This fact may on the surface be surprising, but actually, given the long historical association of service personnel from British and Commonwealth (2) regiments who served and fell at Ypres in World War One: some half a million in all.

St George's Memorial Church, as it is known, was commenced in 1927 and completed in 1929 as a place of prayer, contemplation and commemoration for the families and friends of the British and Commonwealth fallen; it is open all, and its doors are unlocked daily.

The architect responsible was Sir Reginald Blomfield (1856-1942). Features of the building, executed in a light-coloured brick, include Flemish-style gables and a tower with a prominent spire. Regimental symbols abound in the interior of the building, including on banners hanging from the ceiling, in stained glass windows, and on prayer hassocks.

(1) Ypres is strictly the French spelling but, given the enormous, historical connections which English-speaking countries have with this town, I am retaining the spelling usually employed in English. Interestingly, although the local and Flemish regional authorities severely frown on public notices written in French, rather than Dutch, yet out of respect no attempt seems to have been made to insist that St George's Memorial Church's exterior notice board be translated into Dutch.

(2) Among the more well-known Canadians who fell at Ypres was Colonel John McCrae, author of the poem 'In Flanders Fields' (see also, below, re. the Cloth Hall).

In Ypres/Ieper itself, the Menin Gate also commemorates the fallen of the Commonwealth. The Cloth Hall (Dutch: Lakenhal or Lakenhalle ) houses the In Flanders Field Museum

How to get there: Brussels Airlines flies from New York to Brussels Airport (Brussel Nationaal / Bruxelles-National ), from where car rental is available. Brussels (distance: 137 kilometres) is the nearest large airport to Ypres/Ieper . The Belgian railroad company NMBS/SNCB maintains a service between Brussels and Ypres. Please note that some facilities may be withdrawn, without notice. Please check with the airline or your travel agent for up to date information. Please refer to appropriate consular sources for any special border crossing arrangements which may apply to citizens of certain nationalities. 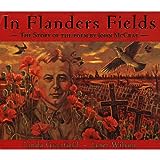 In Flanders Fields: The Story of the Poem by John McCrae
Buy Now