The Seattle Space Needle, built for the 1962 World's Fair, is an iconic representation of the city. It's a "must see" on most Seattle visitors' itineraries, and is also a popular drinks and dining spot for city residents. You get a great view of the city and surroundings, including Puget Sound, from the observation deck.

The Space Needle is located at 400 Broad Street, near the Monorail and Seattle Center House. You can reach the information line at (206) 905-2100.

Seattle's Space Needle turned 50 in April 2012. It was built as an image of the future for the 1962 Seattle World's Fair. Originally built as a tourist attraction for the city's 1962 World's Fair, the structure was meant to evoke the future. The tower was designed by Victor Steinbrueck, an architect with John Graham and Co. on a parcel of land that was sold to the investors for $75,000.

The original Space Needle had a plume of flame shooting out the top. According to Jeff Wright, whose family now owns the Needle, "You could see it from probably 50 miles away. It was a huge deal, but unfortunately it wasn't very environmentally sensitive. It could heat a small town, the amount of gas that went through it. And we shut it down."

An extra observation deck was added in the 1980's.

While the space needle is now entirely white, the flying saucer at the top was originally a shade of orange the designers called "galaxy gold." In honor of the 50th anniversary, the saucer has been repainted galaxy gold, and will remain that color until late October 2012. 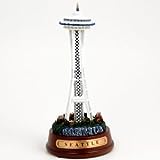 The Seattle Space Needle offers a variety of deals and discounts to help visitors save on admission.