Local Vulcans - the Canadian brand - marvel at the town names around their area that existed before Star Trek® hit the airwaves. These Southern Albertans already had Vulcan, Kirkcaldy, and Ensign, all in a cluster around them.

When Gene Roddenberry's science fiction television series began in early September 1966, the City of Vulcan AB hopped on board the virtual Enterprise NC-1701 immediately, the city residents learning the Vulcan salute and reveling in the sci-fi fun.

Vulcan, Alberta is the Official Star Trek® Capital of Canada as of early 2010!

Like its spiritual sister city, Roswell, New Mexico; Vulcan AB is awash in extraterrestrial visits, humor, and entertainment on a daily basis. Droves of people travel to Vulcan, dressed as their favorite Trek and other sci-fi favorites. Klingons walk down the streets at all hours. Fan created aliens not yet introduced in any Trek series are seen as well. Creatures from Star Wars, The Outer Limits, Twilight Zone, and Avatar are just as likely to make an appearance in Vulcan AB. 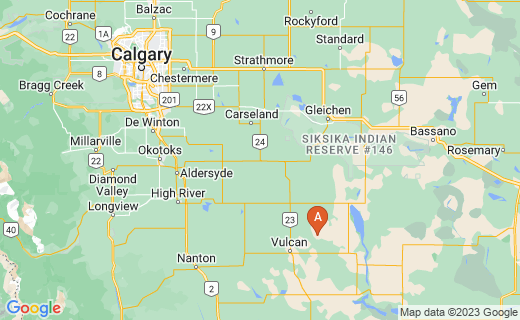 For fans of science fiction, Star Trek®, and other worlds, both Roswell and Vulcan are fun; but Vulcan AB has its own bust of Mr. Spock, its own Vulcan Cruiser, and its own Trek Center for welcoming visitors of any nation or home planet.

The official Tourist Centre is called the Tourism & Trek Station. The interior is a star ship bridge with a well trained and costumed captain and crew to help you find your tourist needs around Southern Alberta and the Badlands. It is equipped with a legion of life-sizes character cut outs as well to make you feel at home in space.

The Tourist Centre offer many more attractions -- A Vulcan Space Adventure Virtual Reality Game is awaiting you in the Trek Station, along with a huge display of 800 items of Trek memorabilia. The place is a welcome center, a museum, and an arcade all in one, more exciting perhaps that the Las Vegas Star Trek® installation. Always filled with Trek characters, visitors do not want to leave the welcome center.

Roswell's 1947 UFO incident gave rise to many tourist attractions like the Little A'le'ien Inn, actually in Rachel, Nevada near Area 51. However, Vulcan is on the west border of the Badlands region, just as isolated a wilderness as the desert in New Mexico and around Nevada's Area 51 - and just as beautiful with its hoodoo rock structures and wilderness tapestries.

This Saamis teepee is found in more astoundingly staged photos around the Internet, but it is 20 stories tall and a tribute to First Nations Indigenous Peoples in Alberta. It was built and staged at the Calgary 1988 Winter Olympics and moved just southeast of Vulcan to scenic Medicine Hat, where travelers pass by on the highway and take an astonished look.

Saami is the name that the related Northern European Indigenous People call themselves in their national anthem: Säämi suuvâ laavlâ. The National Geographic, Smithsonian Institution, and IBM Genographic Project and other research have shown by tracking migration patterns and DNA evidence that the Saami (Sami) and Canadian First Nations are likely linked. Cultural links, such as the oral traditions, arts, architectural designs, and customs also exhibit some similarities.

The term "Saami" in Alberta is also linked with the Blackfoot term meaning "medicine" and this may be the origin of the place known as Medicine Hat. The super-teepee pictured above is one tribute to the First Nations in Southern Alberta and perhaps the Old World Saami/Sami as well, all not far from Vulcan - which seems set at the hub of many colorful peoples, including Mr. Spock. It is a vortex of "fascinating possibilities", as Spock might say.

Todd and Frank at Star Trek Galaxyfest in Vulcan, Alberta

I learned about all of this quite by fabulous accident.

After joining Bill Shatner's MyOuterSpace.com and meeting some interesting creative people on the site and sfter following Mr. Shatner, Leonard Nimoy, and other actors and writers in the sci-fi genre on Twitter, I began to receive some pretty astounding information through that medium. Mr. Nimoy tweeted the link to the video above and watching it led me to look around and find all the rest. Fascinating!

Vulcan is a small town of population 2,000 in the central part of Vulcan County in southern Alberta. The city is approximately 75 miles or roughly 120 km from the larger Calgary AB, which was the site of the 1988 Winter Olympics. Vulcan is not far form the Badlands Region of Alberta, full of natural wonders to see and photograph.

Few new jobs are available in Vulcan itself, but over 24,000 openings are listed around Alberta Province, as shown below. The local economy is largely derived from tourism and related businesses, along with agriculture and the gas and oil industry.

The major AB cities with job listings to fill include Calgary (with over 1/3 of the listings), Edmonton, Ft Mcmurray, Red Deer, Grande Prairie, Lethbridge, Medicine Hat, Sherwood Park, Lloydminster, and Banff, AB (a particular base for resort vacations and tours). The Alberta Pipeline is a good source for jobs, considering that it is partnering with both New Town, North Dakota and parts of Alaska, as well as other places, to transport oil and natural gas resources.

In May 2010, over 24,000 jobs openings were listed throughout the Province of Alberta, gathered from all Internet resources by SimplyHired.com and Indeed.com job search and trending engines. The job titles most often listed and in highest demand are: