"My reason for building the temple and creating art work is just for the sake of letting go and not clinging. Therefore, problems are no problems for me since my mind recognizes no problems. The bigger the task, the more people, time and money are involved. If frustrations,low-spirits, disappointments,poverty, stinginess, selfishness,insincerity, and desires for profit, status, and praise are what one gets in return, it is only natural that suffering will occur to a person who undertakes to perform a big task,since he is not well-versed with reality."

Around thirteen kilometers south of Chiang Rai lies Wat Rong Khun, a unique Thai temple that seems to be made of ice and snow from a distance. Created with a combination of white wash and light-reflecting chips of mirror, it differs from the colorful wats that can be found all over Thailand.

It is the vision of a well-known contemporary artist named Chalermchai Kositpipat. The white color of the building symbolizes the purity of Buddhist teachings while the reflective chips of mirror symbolizes the knowing oneself and the reflection of love from our hearts. Building of Wat Rong Khun began in 1997 and there are still new sections being built today.

Creepy hands reach out to you as you walk along the walkway towards the entrance of the temple. This symbolize desires which we must transcend in order to reach enlightenment. Among the hands are heads of different creatures. What attracted my attention was a beautiful woman holding an old face as the human features stood out from the ghouls and hands that surrounded her. I wouldn't be surprised if it symbolized vanity as one of the most coveted things in this world is youth. People would do just about anything to keep it.

On the other side of the walkway which symbolizes the path to enlightenment are two hands holding up a pot. This could be the artist's way of depicting one's desire for money. It seems to also be a smart way for the temple to collect money as most of tourists entering Wat Rong Khun are dropping alms into the bowl.

The end of the path of enlightenment leads to the two stoic guardians that are ready to stop the unenlightened from entering the temple. Truthfully, it is not the two statues that you should fear but the guard that may stop you from entering if you are not accompanied by a tour guide. According to a sign in the grounds, tour guides are now required as there have been several incidents when tourists behaved inappropriately in the temple. I am, however, unsure if this is being strictly implemented as I managed to enter without a guide.

The prayer hall contains murals depicting contemporary images instead of the usual paintings that depict Buddha's life. These images contain characters from pop culture which make the journey into the temple interesting. Unfortunately, taking pictures isn't allowed in the prayer room as the artist doesn't want his work to be duplicated.

Around the temple, there are also some trees with heads hanging off them. By these trees are stands. On one stand is a bottle of alcohol. The other one has a cigarette on it. This obviously means that the path to enlightenment doesn't include these impure things.

Behind the temple, there is a huge golden building which contains gift shops and toilets. Being a man of deep symbolism, the artist must have done this to show what gold represents.

Around this area are metal trees where wishes are hanged. Yes. This is where the mortals wander and voice out their desires.

Chalemchai Kositpipat graduated with a degree in Fine Arts from the Silpakorn University in 1977. His first works were advertisements on billboards. But he gained popularity painting murals that combined contemporary images to Thai Buddhist art. Although his earlier works were first negatively received, he was commissioned to paint the murals of Wat Buddhapadipa in London in 1988. His works were then accepted by the public and he became rich selling his work. He used the money he earned from his works to create this amazing wat that he envisioned. 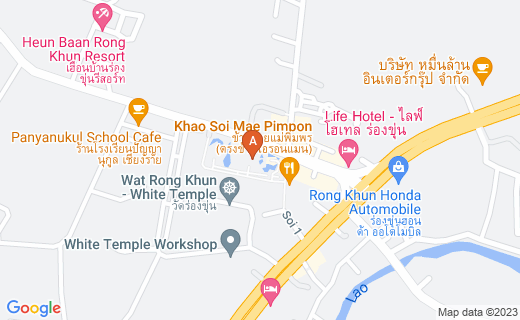