It seems that I can never get enough of the beach. The sound of the crashing waves, the scent of the salty ocean air, the possibility of jumping in the waves or taking an endless walk along the sand, all seem to call my name. When I moved to Connecticut and away from the endless beaches that Long Island, New York used to provide me in the summers of my life, I was worried. Would I be happy living farther away from the ocean? Might I find an equivalent beach experience near my new home? Since moving to CT, I have been on a hunt for a beach that could compare or out-do my beloved Long Island beaches.

When a friend mentioned Watch Hill, Rhode Island suggesting that it was a favorite beach resort of hers, I decided to add it to my summer vacation plans. Each summer, since I have lived in CT, I explore a new beach as part of my quest to duplicate my Long Island beach experience, so this summer “Watch Hill” was the destination for my family.

After packing the car with an overstuffed picnic basket, boogie boards and other beach must haves, we drove a couple of hours to Watch Hill. Just before entering the main town we passed by an affluent residential area, then as the town came into view we could see a marina and then the main street, which is filled with an array of eclectic and high-end shops and a great variety of restaurants. The beach entrance is right within the town.

We parked our car and entered the beach. There are showers and bathrooms and the shore is a very short distance from the entrance. After settling down and playing in the waves we headed out on an exploratory walk.

This is when the true beauty of Watch Hill revealed itself to us; the only access to this section of beach is by foot. There are trails that wind back and forth between the ocean side of the beach and the inlet side where there are boats and sea life to find and when you turn back and gaze at the quaint New England architecture you have a perfect postcard view from all angles. The beach out did my expectations.

Built in 1867 and originally pulled by two men turning cranks, this carousel has been run continuously and has even survived a devastating hurricane in 1938. The speed of the ride causes the horses to swing out on their rods hence the Flying Horse Carousel. The horses were originally carved as rocking horses but when sales dropped off during the civil war, they were adapted for use on carousels.

On our way out I promised my kids that they could ride the carousel that sits beside the entrance to the beach. It turned out that the carousel had a story of its own. It is the oldest continuously running carousel in the U.S. While riding the hanging ponies, children can reach out and try to catch a silver or gold ring on one side of the carousel as it spins around, the child that catches the coveted golden ring earns a free ride. Children and on looking parents alike, love this carousel and storybooks have even been written about it. My son managed to get the golden ring and now his memories of this magical day will last a lifetime. While watching my son ride around the carousel in pure delight, I overheard a teenager standing next to me telling her friend that this carousel “was the best ride she ever went on as a child.” I think that says it all.

In the early days each rider was equipped with a sword to pierce the rings held in the long metal slot, today riders reach out to hook the rings with their fingers.

Publications about Flying Carousel include: Around and Around, by Harriet Moore, The Runaway Flying Horse by Paul Jaques Bonzon and The Brass Ring by Nancy Tafuri.

Watch Hill was in fact a gem in that it offers so much in such close proximity, including natural beach exploration, shops, restaurants, historic hotels and a carousel with a story that will be remembered by all who have allowed it to capture their hearts.

Clark Gable, Groucho Marx, Henry Ford, and Douglas Fairbanks were among those who vacationed here.

A watchtower and a simple beacon were first established at Watch Hill by the Rhode Island colonial government around 1745, giving the area its name, and earlier the point may have been used as a lookout by the Narragansett Indians. The watchtower and beacon were destroyed in a 1781 storm. 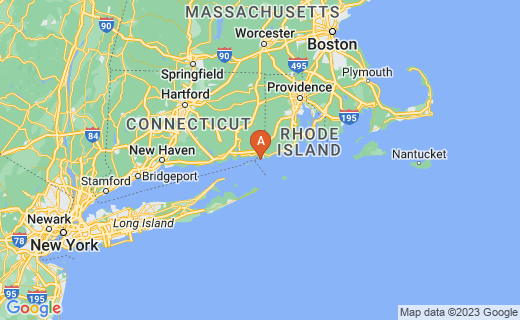