Wayne Ruple has been writing about travel for several years and many of his videos can be found on YouTube.

Most people who have visited or know about Riverside, Alabama learned about it via The Ark - the most popular catfish restaurant in the area whose fame has spread across the state and even the nation.

The Ark and Riverside are now sort of synonymous with each other and what began as a "rip-roaring" alcohol serving restaurant floating in the middle of the Coosa River, accessible only by boats or a four-foot-wide catwalk from the western bank, has now been featured in USA Today’s “Top Ten Catfish Restaurants In The Nation,” been pictured in the New York Times and has served families, fishermen and most every NASCAR driver including Richard and Kyle Petty, Mario Andretti, Dale Earnhart Jr., Jim and Bill France and locals such as Red Farmer and Neil Bonnett.

Now sitting securely on the banks of the Coosa River within a stone's throw of the old Highway 78 bridge, The Ark at one time was located in a "no mans land" in the middle of the Coosa River out of the range of both St. Clair and Talladega County revenue officials who could not raid the facility and charge them with illegally selling alcohol.

Over time The Ark sort of drifted to shore and in so doing became a vocal point for the town of Riverside.

Riverside on the banks of the Coosa River 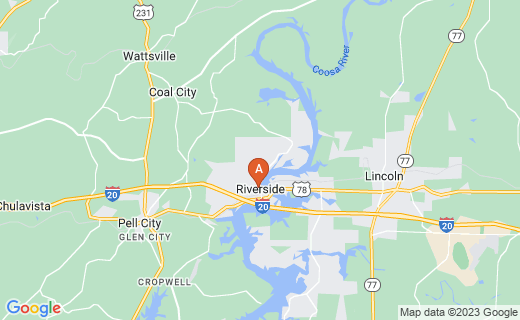 Riverside, Alabama is located on the banks of the Coosa River

In addition to it's nationally famous restaurant the community offers on-the-river living and a renovation of boat docks which enable boat owners to bring their boat to the river and shove off in the shadows of the landmark railroad bridge.

Boating, fishing and jet ski riding are popular to the town.

The town was incorporated in 1886 and was actually the county's major industrial center with saw mills and milling leading the growth. A ferry operated and crossed the Coosa River until 1937 when the Bankhead toll bridge became toll free.

In addition to its history the town is also known nationally for it's excellent pure water supply.

The town's website notes, "It is perhaps one of the finest water supplies for its people than any town in Alabama, and maybe in America".

In 2001 the National Rural Water Association named the town's water system as the best tasting water in America.

Off For A Ride

For those wanting to see more while in the area, just west of Riverside is the town of Pell City which offers good shopping, plenty of restaurants and motels.

The downtown area there offers some art and antique shops along with some historical buildings.

RV campgrounds are located along the Coosa River both in Pell City and Riverside and a riverside park offers a relaxing experience with picnic pavilions, a children's play area, walking trails, man-made beach and boat ramp along with places to fish.