Kintyre is a peninsula situated on the south west coast of Scotland. Almost an island, it is joined at West Loch Tarbert to mainland Scotland by a short stretch of land.

Paul McCartney’s song ‘Mull of Kintyre’ was dreamed up here, the Mull of Kintyre being the southernmost tip of Kintyre, where mist does indeed roll in from the sea. His farm is in an isolated area near Campbeltown, the principal town in Kintyre.

Kintyre is around 40 miles long and 11 miles wide. 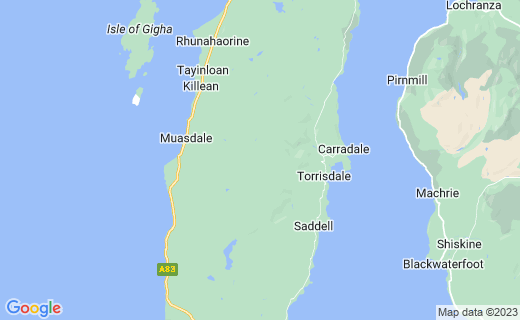 Arriving from the nearest metropolis, Glasgow, and driving west along the A82, then seamlessly joining the A83 at a place called Tarbet, after a distance of some 80 miles you will reach Tarbert (notice the difference in spelling) which is a small town almost at the head of Kintyre. Less than a mile further on, you reach West Loch Tarbert which is so small, if you blink you will miss it. It does, however, have a hotel (West Loch Hotel) and tea-room if you need a break.

You will know you are there because the sea-water of an inland loch suddenly appears on your RIGHT-HAND side. The last waterway you saw was on the left-hand side. This water is called the West Loch.

A mile or two further on and you will see on your right hand side a narrow road leading to the Kennacraig Ferry terminal, where you can catch the car ferry to the island of Islay.

If you are not driving but travelling by service bus, the West Coast Motors bus has a designated stop right at the ferry terminal.

Travelling south now, the next village you will reach is Clachan, which boasts a filling station should you need to top up. Fuel in the whole of Kintyre is expensive, more so than in Glasgow, excuse being that delivery lorries have further to travel. It’s a good idea to top-up in Glasgow before you leave if you are driving.

About a mile past Clachan, you are greeted with the full majestic spectacle of the Atlantic Ocean, featuring some of the islands of the Inner Hebrides, namely Gigha, Cara, Islay and Jura to the West, and Mull to the north-west.

You will pass rocky, sea-weedy coastal areas and fertile farmland on your next 20 miles, with the Atlantic always on your right hand side, interspersed with bays of pure white sand and crystal clear greeny/blue waters. Many other areas of the shore are rich with shells like cowries, scallops, cockles, periwinkles, cockles and whelks.

You will pass through Tayinloan where there is an hotel , a grocery shop , quite a few houses and this is the place you would catch the ferry (a car ferry) over to the island of Gigha.

The hotel in Tayinloan, the MacDonald Arms is for sale.

A few miles further on and you reach the village of Muasdale which has a shop, a holiday caravan park, and other letting accommodation.

The next village you will pass is Glenbarr, but you may not notice it much because the road bypasses the village, but there is an Abbey there of historical interest and guided tours on offer. Glenbarr Abbey

Then comes Bellochantuy, with its stretch of pure white sands and dunes and the hotel almost on the beach.

Less than a mile further on is the renowned Hunting Lodge Hotel.

From there on down the coastline is rocky with the occasional sandy cove, with a steep, stepped raise beach on you r left-hand side until you reach Westport, which is the name of a stretch of sandy shoreway banked with steep dunes. At this point, the road turns East and inland away from the Atlantic. Here the landscape is of gently sloping green pastures, with most fields full of cows that produce the milk that makes the world famous Mull of Kintyre cheese.

Pass through the tiny village of Kilchenzie and a mile or two on pass the roadway on your right hand side that would take you to Machrihanish airfield, where a daily plane flies to Glasgow.

Machrihanish was formerly an RAF base that housed many American marines in the 60s/70s/80s till it was closed in 1995.

From the turn-off to the base to Campbeltown is about 2 miles.

This video link has been sped up. He didn't really drive 19 miles in six minutes! Also, he could have washed his windscreen before he started filming!

The Wilsons In Kintyre Scotland: Their Genealogy From The Mid 17Th Century Onwards
Buy Now