West Rouge: On the Edge of Toronto

Laura has been photographing historical, abandoned, and rural ruins in Ontario since getting her first digital camera in 2006.

I grew up in the community of West Rouge. I went to school at West Rouge Public School. I wasn't born there, we moved from the urban area of Toronto, but West Rouge is the place I remember when I think about being a kid, going to school and growing up to attend Joseph Howe Senior Public School (the first year the junior high school opened) and then Sir Oliver Mowat C.I.

West Rouge is a neighbourhood located in the city of Toronto, Ontario, Canada, in the city suburbs of Scarborough. The community is bordered by Lake Ontario to the south, the Rouge River to the east, Highland Creek to the west and Kingston Road to the north. The area was once known as the town of Port Union.

Map of the West Rouge Area 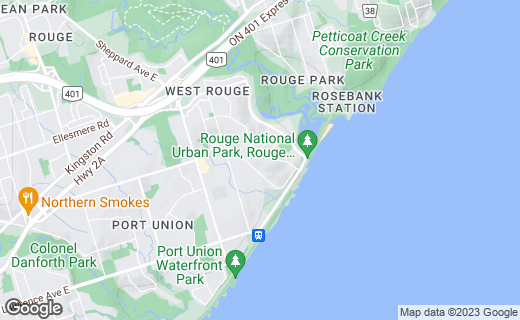 I've Had a Copy of this Book for Many Years

Port Union is part of the Highland Creek community. The old town lines are located in the south east corner of Lawrence Avenue and Port Union Road.

Port Union thrived as a ship-building and fishing community. The opening of the Grand Trunk Railway in 1856 started the decline of Port Union’s shipping industry as the railroad industry grew. In the 1940s, Port Union returned to its nautical roots with the reintroduction of the shipping industry.

The area was settled as early as 1798, when a crown patent for lots 29, 30, 32 & 33, "Con. 1 with the Broken Front, Township of Pickering, County of York and Home District, Province of Upper Canada", were granted to William Holmes, Esquire. In 1843 Henry Cowan, an immigrant from Ayr, Scotland, bought lots 32 & 33 from Holmes and settled the land with his family. In 1848 Cowan sold a small portion of his land on the shores of Lake Ontario to the Grand Trunk Railway Company.

(As a side note, when I grew up on Rouge Hills Drive, there was a Mr. Cowan living across the street from us. So the family stayed in the area for years and years after buying the original land at least 150 years before.)

Mr. William Jackson and others purchase the piece of the shorefront south of the tracks from Henry Cowan in 1860.

A post office opened in Port Union Station in 1865. Early businesses in the area included the Scarborough, Markham, and Pickering Wharf Company (est. 1847), and hotels (Helliwell's Hotel) operated by Will Hetherington and Thomas Laskey.

Henry Cowan’s son, William, buys Lot 31, on the east side of the Rouge River from Mr. John Pollock in 1868. This summer resort became known as “Rosebank”.

In 1925 Dyson Craig Cowan (the son and heir of William Cowan Jr) sells “Rosebank” to the Riverside Development Company Limited (Cecil White) for the sum of $25,000

Riverside Development Company Limited changes its name to Rouge Hills, Limited. The intentions were to create a summer playground and country estates on the banks of the Rouge. The community was to be “The Venice of the North”.

Summerland magazine is published by Rouge Hills Publishing Company in 1938. Summerland speaks of “The Dream and the Man Who Dreamt It”.

Although the dream community didn't happen as planned, the name of White’s subdivision “Rouge Hills” lives on to this day. Locals call the are "The Rouge" or "Rouge Hills". The name also lives on in the public school, GO commuter station, a shopping plaza, and a very long street (Rouge Hills Drive) which runs from the top, north of Island Road, down to the bottom, at the Rouge Beach.

In 1948, the land that is now a new housing development between Rouge Hills Dr. and Ridgewood was sold to Rouge Hills Golf and Country Club Limited. In 1973 the golf course and country club were closed. The land was abandoned and left to grow wild. Locals used it as a bike trail, walking path and so on for a long time. Eventually, it was bought up and a housing development was built on the land.

In 1979, fire guts Henry Cowan’s old stone farm house on Rouge Hills Drive, built sometime between his purchase of the farm in 1843 and his death in 1868.