What goes on around the harbour of St Monans in Fife

St Monans may not be the most well known place in Fife, on the East Coast of the Uk, however, to me; it will always be like a second home, which is rather strange really, because I live in the town of Glasgow.

My Father taught me to fish from the harbour of St Monance while the men made the boats at the beginning of the pier. Of course like everything else, boat building has now gone, and even the bank is now a tea room. During the summer, and long weekends, we fished from the pier. I also learned to gut the fish, clean them and even fry them for dinner.

Long days were spent watching the fishing boats sail in and out of the harbour while hooking our live worms on to the hook. Another relaxing part of our day, would start with the digging of the sand at the harbour when the tide was out. We would dig on the little circles until we found the culprit just below squirming in the sand and certainly not waiting for me or my Father to dig it up and stick it on a hook. Of course there was a setback - the smell of sand and the muck left from the sea. It was strange that after all these years I would quite welcome this smell and the memories of future visits as a Mother and Wife living in the "big City of Glasgow".

The best thing I learned from St Monans, was the Fife accent. When we were travelling from Glasgow to Fife we would cross the Kincardine Bridge. But it was from this moment, that I would change from my Glasgow accent to a Fife accent usually saying to my Father

My Father would look at my Mother and she at him and a wee smile would appear as they heard the chink of my penny usually hitting the bars of the bridge instead of falling into the water, where ,had it reached that water, would surely have brought me a nice wee boyfriend.

As I threw my penny from the bridge I would always wish for a boyfriend. Everyone knew, that if you threw a penny from the bridge to the water, your wish would come true. It all started when I was very young, and I never did find out who’s idea it was to tell me that in the first place. I suspect it was a plan to distract me from asking “Are we there yet? I certainly carried this ritual on until I was 17 and my Father decided to get up and die on us. At this time I had to learn to drive and then drive my Mother over that fast becoming lonely bridge for both of us, where I could no longer throw my penny over the bridge to make a wish, nor did I want to.

Pittenweem, one of the most photographed Villages in the East Coast is about 5 miles away from St Monans and is better known because of the famous “Pittenweem fish”. The fish and chip shop at the Main part of the Street in Pittenweem claims to have the best fish and chips in that part of the country. However, Anstruther appears to have a certificate to most definitely be the best in the country. The fish and chip shop up the road from this, in Anstruther however, has much smaller lines to wait in, and definitely sells even better fish and chips in my humble opinion. I suspect it’s all about the batter anyway and not the fish.

Strangely enough we have a little white van which goes around Glasgow selling freshly caught fish from Pittenweem which I only discovered a couple of months ago. When I saw it I immediately stopped my car and went and bought some fish. The first thing I asked the man selling the fish was “Are the Guthrie’s still in St Monans?” He replied “Oh Aye, that’s ma cousins noo. Ken the old yins are awaw noo, (dead) but their younger ins are still there” and then he gave me all the gossip. It was so lovely just to hear the accent again as I hadn’t heard it for such a long time.

My first experience of witnessing what “They” thought and what “We” thought, came when I was walking along the rocks. We would walk to the church, where the sea would break its temper onto the wall around the graveyard. Here you had to decide whether it was safe to walk around the side towards the old ruins, in order that the tide wouldn’t cut you off. Often I would just go and lie up in the old ruins listening to the roaring sea just below me. With a bit of luck the sun would be out cutting the chill from the sea. Many days of my younger life I lay here on the grass or some days I would carry my guitar on my back and sit and play Carole King to the sun and the sea.

Heather was a year younger than me and at 16 we had met in the local shop when her voice had made me stop and listen.

“Whar did ye get your skirt?” Her twang reaching a high pitch at the end made me turn around. We both started laughing when we recognised we were wearing the same skirt. Only difference was, hers had been taken up about three inches shorter than mine. It was when we said together “Wallis” that we had bonded. It had been a perfect moment for me, because until then I just walked around carrying my Fathers huge radio and listening to radio Caroline. I just walked round and round the village during the day and sometimes at night too. In the morning I would walk down to the front to the shop. Here you could meet the old men of the village, who would meet at the harbour smoking their pipes and looking out to sea. If you asked them what the day would be like they would answer in such a strong accent that even one who was used to the Fife accents could hardly understand them. I would only pick up on the odd word, such as braw (nice). The men all wore bunnets pulled down over their eyes and their weather beaten faces matched their jackets and brown trousers. They never did get the weather wrong.

I had been going to Pittenweem since I was a wee baby and when I reached the age of ten we were promoted to St Monans. We started off in a wee tiny caravan (a two berth), and one day my Father said we were getting a new caravan. We walked around and he pointed to nicer two berths showing me what it would look like. Ten past three, in drove an articulated lorry, with a gigantic mobile home on the back. I watched in awe as this thing got nearer and nearer while still waiting for our small new van to arrive. Suddenly the driver jumped out his cab and shouted to me “Walker”. I nearly collapsed shouting “Yes” in reply. Next thing I know he’s backing this gigantic caravan into our wee tiny space where the old caravan had stood. I think that must have been such a special day for me, and may have been the reason I associated St Monans with such goodness. Then began our frequent holidays and weekends at the caravan site in St Monans.

Of course St Monans had not always been spelt this way either. In the beginning it was called St Monance, and then they decided to change it back to the original spelling which must have been a long long time before.

So after meeting Heather and a few of the other girls of the village, we would walk along to the old ruins and look for fossils. And it was here as we walked along the rocks that I started admiring the pools of water. I commented on their wonderful assortment of crabs, fossils, and strange little circles of life which squirted and moved around trying to give itself life. It was as I looked in one of these pools, that I remarked to my new Fife friend that “The little pools were lovely”.

She screeched “Ah day believe ye, did you jist say they were bonny?”

I looked back at her with the same puzzled look as she had just given me, and replied in her language “Aye” with the tilt going up at the end.

She then shocked me even further by saying “I just didny think that a body fae the big City of Glesgy would like that kinda thing”.

I was actually speechless. I just didn’t realise that they had made all these assumptions about people from the City as they called us. I guess having no shops, didn’t help. There was no dancing apart from the local village hall, with their quick step and waltz. The two pubs didn’t have a big turnover of people. I guess for them Glasgow must be the big New York for us. Perhaps we didn’t realise just how lucky we were to live in a growing vibrant City like Glasgow.

A few weeks after the pond incident we were all out one night in Leven. Then the toilets were public, in the street, and we were waiting to get in to a stall. Everyone was putting on their lippy with no mirror of course, when all of a sudden three “Leven girls” came in from the street. We were trapped and couldn’t leave and these three were scary girls. All of a sudden June whispers to me “Talk in your Glesgy accent”. I knew she thought if they heard my accent they would think I was more scary than them. I was totally petrified as they were really tough. I didn’t know where I got the guts, but suddenly I heard this tough voice exiting from my lips with a few expletives thrown in and then I stared them right in the eye. I struck my hands in my pockets because I was shaking with fear, but I put on a wee swagger and waited with the toughies while my St Monans friends used the toilets. I could almost feel the fear coming from behind those doors. I came out laughing eventually because I was the “hero” of the day and they were all so pleased to have “a tough friend from Glesgay”. They told me going home the Leven girls would never “touch” the St Monans girls again, because of me. I was never so glad to get off that bus back to the safety of my beautiful St Monans. Everybody talked about this for months to come, but inside I hoped that we would not be going back to Leven for a little while.

St Andrews is only about 30 minutes away, and this is where all the golfers play. I don’t know why we didn’t go there, I’m sure the students and the golfers would have been such better company than the Leven girls, but then hindsight is a great thing. 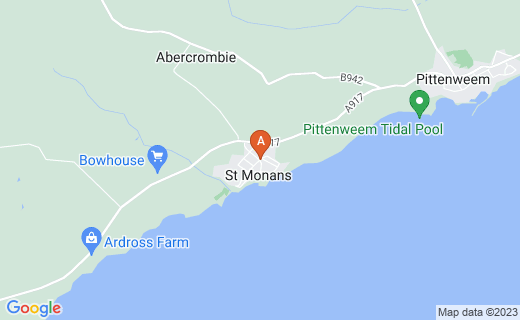