Where to Eat in Blackpool

Blackpool is full of cafés, restaurants and fat food takeaways, but with all the choice it can be hard finding a great place to eat.

The best thing to do is look for somewhere that suits everyones taste so you don't have to go traipsing around different places for different people.

Bellow you will find a list of different places and their locations so you can try and plan your meals while you are in Blackpool.

Be aware that allot of the food outlets will be busy most of the time so plan for queues as well. 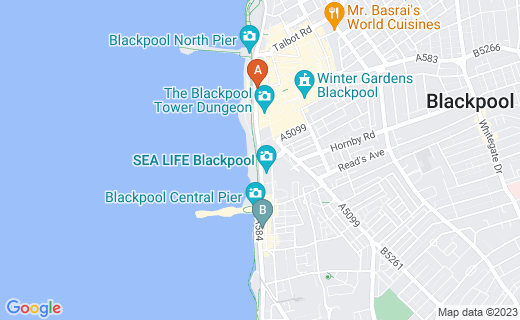 You cannot go wrong with Fish n Chips when you are at the seaside and Blackpool has some great choices whether its take out or eat in there are some great places to choose from. In fact there are too many to place on the map so I've just placed two of the best for now.

Harry Ramsden's is situated just north of the Tower and is one of the most well known companies for fish and chips.

Located in Silcock's Fun Palace, it is known to be one of the best around.

Both of these are located in the North end of the Tourist area within short walking distance of the Tower and other top attractions. 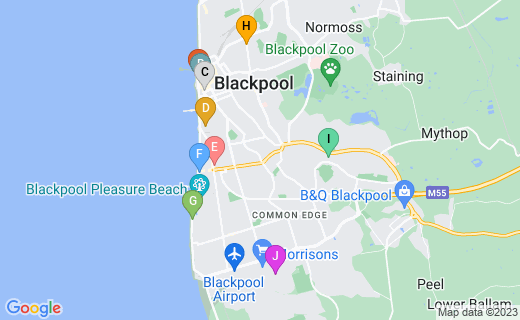 Kids seem to love Fast Food and the companies seem to know it. The problem in Blackpool is that it rarely lives up to its name and at times you can Que for half an hour in some of the more popular areas.

From Burgers to chicken wings they have it covered.

There are to many MacDonald's in Blackpool to count and you are never to far from one. However the ones in the main tourist areas are always busy.

There is one near the Tower and one just North of the Pleasure Beach. There are drive throu's on the way in. One of which is situated in the Morrison's car park on the road to the airport.

There is also a restaurant located in the airport terminal.

If you fancy a MacDonald's while visiting the Zoo, Stanly Park or Marton Mere, their is one to the south of these attractions in Marton

There are only two Burger Kings within the main parts of Blackpool. This makes them the less obvious choice but they are both in top locations.

One of them is a main eating place for visitors to the Pleasure Beach which can be very busy at times.

The other one is situated near the north end of the Prom not far from the North Pier.

If burgers are not your thing and you prefer chicken then maybe KFC is more to your taste.

There is one KFC missing from the map. It is located in Marton not far from the MacDonald's