A Little History of Whitby

Whitby has played its part in the history of the UK and world exploration over the years. It has many connections with historical and famous figures.

Whitby was once a major Whaling Port as well as the place Captain Cook first took to the sea back in 1747. It is also where his ship HMS Endeavour was built. It is also here that Bram Stoker came up with the idea of Dracula and where some of the book was actually based.

In recent history Whitby has become famous as a filming location of ITV's 60's Drama Heartbeat. 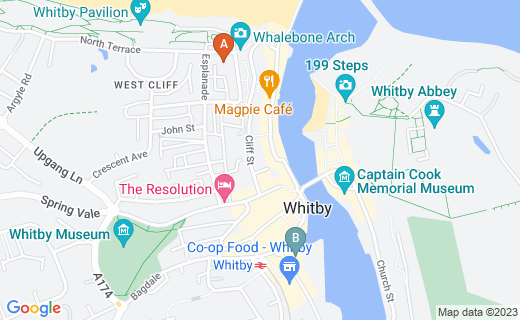 There are lots of great places for tourists to visit.

Sat on top of the cliff overlooking the Harbor these two monuments connect to Whitby's Maritime past.

The Captain Cook Monument commemorates the life and achievements of James Cook.

The Whale Bones represent Whitby's passed as a Whaling port. The ones that are on the site now are replacements for the originals that were given to the town by a Norwegian shipping company.

Situated at the mouth of the River Esk Whitby Harbor is a great place to sit and relax and even take a boat trip on the North Sea.

Take a trip on Whitby's old Lifeboat the Mary Ann Hepworth. Running Half Hour Trips this piece of Maritime History saved many lives when it was a working Lifeboat and is owned and run by an ex RNLI Crewman. It has been lovingly restored and is even painted in the RNLI colors.

Sail the sea on the Bark Endeavour Whitby, a 40% size replica of Cooks HMS Endeavour.

Why not go Whale watching. Yes thats right you can take a trip into the North Sea to find Whales. Run by Whitby Coastal Cruises who also run standard pleasure cruses.

As well as the Boat Trips from the Harbor there are also land based sight seeing tours that leave from the bandstand near the lifeboat museum. These are no ordinary sight seeing tours as they take place on Charlotte The Charabanc and Elizabeth The Steambus two real pieces of history.

Railway Station and the NYMR

If you time your trip right then you may get to see a steam locomotive puff into Whitby station running on the NYMR. However most of the services I've seen running into Whitby on this line have been Heritage Diesel Locomotives.

The NYMR serves as your gateway to the moors and what is often referred to as Hartbeat country. If you are staying for a few days and have the money then a trip on the railway is well worth your time. If you were a fan of Heartbeat then take a trip down the line to Aidensfield or Goathland as its known to the locals. If you have Harry Potter fans then they will know the Goathland station as Hogsmead Station and may recognise some of the journey as well.