Mentioned in an article in the New York Times recently, Whitstable is a unique Kent coastal town just over an hour by train from central London. CJ Stone liked it so much he decided to move there.

There’s something about Whitstable. It’s not only its physical appearance - those white-painted, weather-boarded fisherman’s cottages in their homely terraces, or the Victorian Christmas card shop-fronts up and down Harbour Street, or even the network of back alleys that embroider the town in a criss-cross pattern of secret destinations (some well-established enough to have acquired names) - but there’s something else too, something less substantial, but no less real. It’s an atmosphere, perhaps; a mood, a feeling. A sense of history, not as some dry academic thing, confined to the library and a dusty book shelf, but alive, in the very streets, in the lay-out of the town and in the people who choose to live here.

People’s first sight of the town is usually coming down the hill from the A299, London to Margate road. You see the town below you, strung out along the North Kent shore at the confluence of the Medway and the Thames, with the Isle of Sheppey dividing them. On a clear day you can see the far-off hotels and tower-blocks of Southend glinting on the Essex coast. But whatever the light, the view is dominated by the estuary, the colours always shifting, from iron-grey, to green, to brown or blue.

I first came here in 1981 or 1982. I was visiting a friend in Canterbury. We caught a bus to Herne Bay, about six miles further along the coast, and then walked to Whitstable along the sea front. It was early Summer. We had cherries and soft cheese with us for lunch. And, when we arrived in the town, we sat down on the sea wall in a place backed by off-balance wooden sail lofts, looking out across the ruffled estuary, and ate our lunch. I knew then that I would like to live here.

Most people fall in love with Whitstable at first sight. I’ve been living here since 1984.

The first thing you notice about the town is that it is very much alive. It’s not like many towns in the Southeast, a mere dormitory for out-of-towners working in London. The High Street is brimming with bustle and its own particular style. There are enough people left in Whitstable who prefer to walk to the shops to make the High Street still viable. So, along with the obligatory Co-op (at the less fashionable end of town) and a number of quite ordinary butchers shops and green grocers and newsagents, you have the odd glimpse into a forgotten world of gentleman’s tailors and oyster parlours with a distinctly nineteenth century feel.

When I first moved here there was a little shop called Hatchard’s on the high Street, now sadly closed. It was a gentleman’s outfitters of the old fashioned kind, a family business for a hundred years. Prior to that it was a pub.

Stepping through the tinkling front door was like walking back in time. Wooden floorboards and shelves stacked with traditional items: from flat caps to fisherman’s smocks, from trousers with turn-ups, made of mole-skin or heavy-duty corduroy, to a rack of fluorescent waistcoats to bring colour to a gentleman’s otherwise discrete wardrobe. You would notice that the staff all wore waistcoats too, with handkerchiefs in their breast pockets, and crisp shirts and neat ties. There were three of them, all immaculately turned out. They advertised their ware by wearing it.

Most appealing was the atmosphere. It wasn’t just traditional clothing for sale but traditional values too, of politeness and good-service. Alterations to clothing were done free of charge.

Well Hatchard’s is gone but Wheeler’s Oyster Bar is still very much alive.

Oysters are what Whitstable is famous for, of course. As John Hollingshead wrote in “All Year Round” on the 29th of November 1859: “Many important towns in many parts of England exist upon one idea, and Whitstable, though not very important, is one of them. Its one idea is oysters.”

That remains a fact. And the one place to eat them is Wheelers. Don’t bother going anywhere else. Wheelers is the original oyster parlour, first opened in 1858. We can only guess whether John Hollingshead visited or not, but it’s fairly likely that he ate oysters in a place not unlike it.

Behind the bright pink and blue facade, Wheelers offers us a taste of real history, with a parlour that truly lives up to its name. More like someone’s living room than a restaurant or cafe, it is homely and comfortable, with plenty more on offer than just oysters: a range of gourmet dishes at reasonable prices. Bring your own beer or wine (there’s an off-license across the road): corkage is free. But beware: trade is very brisk all year round, but particularly in the summer and at weekends. We recommend you book well in advance.

I say “ordinary” to describe some of the day-to-day shops on the High Street, but, of course, unlike a number of town-centres nowadays (take Canterbury, for instance) where shopping has become a mainly out-of-town experience, and the High Street is left to chi-chi restaurants and souvenir outlets catering for tourists, the presence of these ordinary shops has become a quite extraordinary thing. Not that Whitstable is entirely free from the requirement to serve out-of-towners. It’s just that, amongst the continental delicatessens and croissants caterers - no bad thing surely - you can still buy a plain white loaf, a bag of potatoes and a joint for the Sunday roast.

The reason for the presence of delicatessens and croissant shops is that Whitstable has become fashionable of late, particularly amongst the London media-set. So part of your browsing experience might well be celebrity-spotting, in the process of which -like any good twitcher - you could mark your card with a fine example of the pop-star type (Jarvis Cocker, say), or the comedian type (Alan Davies, who began his career in the town) or even the much rarer Newspaper Editor type, such as Janet Street Porter, who, rumour has it, has a weekend cottage here. Certainly she can be seen occasionally, wearing walking boots and an anorak, striding purposefully out of town on one of her regular rambling expeditions.

Home - Old Neptune Whitstable
The famous pub on the beach at Whitstable; "the Neppy" as it is known locally. See which bands are playing this week.

But none of this is new, of course. Although Whitstable has been a traditional place to visit for day-trippers from the East End of London since the nineteenth century at least, it has always seen its fair share of famous visitors too. Charles Dickens came here, as did Turner - both as famous as any pop-star in their own day - and Somerset Maugham lived here too, and celebrated the town in two of his famous novels: Of Human Bondage and Cakes and Ale (see below right). He called it, not too subtly, Blackstable. And, more recently, that doyen of camp Hammer Horror movies, Peter Cushing, spent his retirement years here. There is a Cushing’s View - a platform with benches overlooking the sea - and even a song to mark his connection to the town.

As for those sea-views: the next thing you notice about the town is how difficult it is to find them. You can drive right through it and never get a glimpse of the sea. This is one of its charms. For a well-known sea-side town it reserves its sea-views with a notable discretion. It’s as if, like a huffy pantomime dame, the whole town has lifted its skirts and turned its back on the sea. Finding it is a real adventure involving complex negotiations with back streets and alleys. You can be walking within yards of it and still not know it is there.

But - to give you directions - the sea front is behind Island Wall. Take one of the alleys from the High Street to Middle Wall, and then another from there to Island Wall. Try Squeeze Gut Alley, if you can find it. (Make sure you go before lunch: you‘ll soon discover how it acquired its name.) From there, slip down any of the alleys cutting through between the cottages, and you’ll come to the sea-wall and, at last, your unobstructed sea-views.

And from this position you will notice something else too. There is a pub on the beach. Called the Old Neptune, it is a favourite place to drink and take in the sunset, with tables laid out outside, a welcome resting place for many visitors to the town.

Of course, the Neptune isn’t the only pub. Other recommended hostelries are the Royal Naval Reserve, the Ship Centurion and the East Kent (all along the High Street): and my own favourite, the Labour Club on Belmont Road, situated in a classic Whitstable 18th century wooden framed building, and worth a visit, if only for the dry, off-the-cuff humour of its patrons and staff. The beer is cheap too, though you‘ll have to ask to be signed in.

Finally, no visit to Whitstable would be complete without a trip to the harbour (off Harbour Street, naturally) where you will find the fish market, with a range of local sea-food on sale. This is easy enough to find. You have only to follow your nose. The unmistakable smell of boiled whelks is what gives it away.

All in all, Whitstable is a unique Kent town with a distinctive atmosphere, worth a visit at any time of the year. 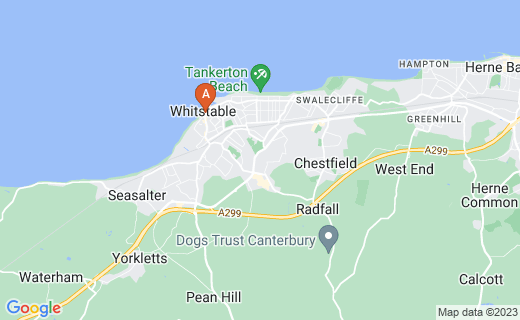 Trains leave from London Victoria and London St Pancras once an hour.

Read CJ Stone in the Independent: Whitstable - A New Chelsea?