Los Cristianos is a tourist resort in the south of Tenerife in the Canary Islands, and for many reasons it has become one of the most popular holiday destinations on the island. This is mainly because of its location in one of the sunniest parts of Tenerife and also because it is conveniently close to the airport.

Los Cristianos started life as a fishing village but in the late 1960s rapidly evolved into becoming a Mecca for tourists visiting the island. Sheltered by Guaza Mountain on one side it is a natural sun-trap and had its very own beach.

Los Cristianos has two very large beaches that have been created with imported sand in addition to its own natural one of black sand and pebbles. Playa de los Cristianos is near the resort's harbour and Playa de las Vistas is further along from this going up the coastline. This latter beach was awarded a Blue Flag for excellence and both beaches are ideal for sunbathing and other beach-activities.

But Los Cristianos has much more to offer. It has loads of bars, restaurants and a very large shopping centre, as well as very many local businesses that offer all manner of services.

Los Cristianos has hotels but many tourists choose another form of Tenerife accommodation for their holidays. Self-catering is very popular today and there are very many Tenerife apartments that are available for rent both on a short-term basis or for long-term rentals.

These apartments are usually in large apartment blocks and community complexes which have their own swimming pools for the use of residents, as well as attractive flower gardens.

Tenerife centre boasts a very large area for shopping and a bus station with regular services both locally and to take passengers all the way up to the north of the island. It is easy to take a bus to other resorts in the south, such as Los Gigantes, or you can catch one that will go up to the capital of Santa Cruz in the north or high up on Mt Teide.

The Los Cristianos harbour is a focal point for the resort and is where the ferry services operated by Fred Olsen run from. These ferries go to and from the neighbouring island of La Gomera.

The equally popular resort of Playa de las Américas is right next to Los Cristianos and it is easy to walk along the seafront that connects the two together. Los Cristianos has managed to hang on to much more of its Canary Islands and Spanish atmosphere though, and many people prefer it for this reason. Las Americas has more night clubs and nightlife and tends to appeal more to the younger generation. In many ways it is the more modern of the two resorts. 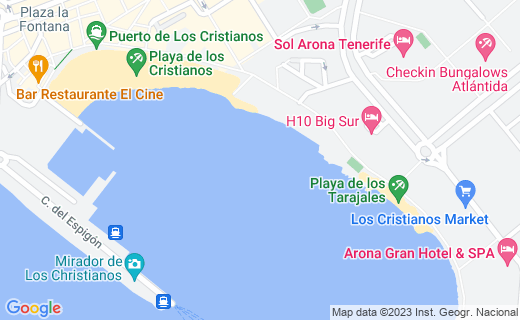