Raye was born in New England, grew up in the Mid-Atlantic, spent college out West, and presently publishes Hubs from the Pacific Northwest.

The House that Mrs. Winchester Built

One of California's most curious and eccentric historical landmarks is the Winchester Mystery House, located in San Jose, CA. When William Winchester, namesake and heir to the Winchester rifle company fortune passed away, his wife Sara became the recipient of a vast amount of wealth, making her one of the richest people in the country for her time. however, she harbored a deep sense of guilt and fear about how many people had been killed by Winchester guns, and worried greatly about the ghosts of all those victims.

She was fond of seances and fortune-telling, and supposedly a medium told Mrs. Winchester that if construction on her home never stopped, she could keep herself safe from unhappy spirits. For 38 years, workers kept at it three hundred and sixty-five days a year, seven days a week, twenty-four hours a day, doing something on the Winchester property.

The designer in charge was Mrs. Winchester herself even though she had zero education or training in construction or architecture. She expanded the small farmhouse into a multi-floor mansion, a sprawl of bedrooms and parlours with a smattering of kitchens and bathrooms. Even more eccentrically, Mrs. Winchester never had any visitors to the house EVER, and over the years the only people there were herself, one niece who inherited the estate later, and the servants and workers.

The Inscrutable Mrs. Winchester and Her Mysterious Mansion
Buy Now

One detail Mrs. Winchester loved in her house were custom-designed windows made by the Tiffany Glass Company. The most expensive window in the house was a large single panel which cost $1,500. At that time, that represented a day and a half of what Mrs. Winchester earned from her Winchester stock. To compare, a regular window at that time cost $3.

The $25,000 Storeroom is a room just off the carriage room in the house, used to hold components and pieces for rooms under construction. At the time of her death, this room held $25,000 worth of Tiffany windows waiting to be installed into rooms in the house. Mrs. Winchester used to contact the Tiffany glass company and just pre-order windows so that a stock would always be on-hand for the never-ending construction, with the company making windows with designs that fit her color and motif preferences. Now, the contents of that room are referred to with that slightly-breathless description of "priceless." The panes that were never installed in the house are on display here, and secured against earthquakes.

Overall the house has many, many installed Tiffany windows with certain flower motifs and numerically-significant decorations repeated throughout.

Documentaries About the Mystery House

Learn about the Winchester Mystery House

The Quirks and Curiosities of the Mystery House

Mrs. Winchester was very much her own woman, so no one is entirely sure why she built her the house the way she did. Clearly some details of the house are Queen Anne-style architecture, but others are pure Winchester. Were they put there purely as a way of keeping work going (the 'staircase to nowhere'). Other bits seem to be there as a result of Mrs. Winchester changing her mind. Or perhaps some features are meant to confuse and mislead wandering spirits (the 'door to nowhere').

Whereas some people have a fear of the number 13, it was Mrs. Winchester's favorite. Repeated all over the house are things in groups of thirteen: window panes, wall hooks, drain holes in sinks. The daises that Sarah Winchester planted in her gardens and commissioned as a recurring motif in the house are a thirteen-petaled flower.

A very short woman, only 4' 10" tall, Mrs. Winchester became arthritic in her old age and had many new staircases added to her home, composed of very low "easy-riser" steps. These spiral up and down throughout the house and were used exclusively by Mr. Winchester, with her servants using regularly-sized stairs of their own. The large house featured many ultra-modern conveniences of the day: centrally-controlled gas lighting, an electric bell system for calling the servants to different areas and an indoor shower for bathing.

Visit the Mystery House in California 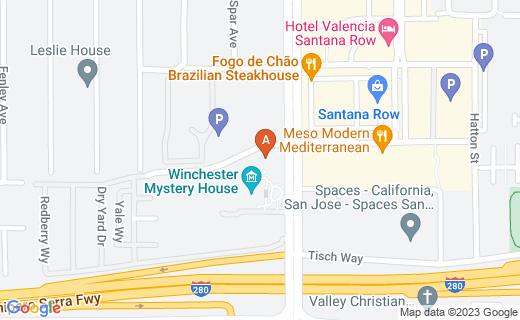 More About the Winchester Mystery House

Take a Walk Around In the Mystery House