A Memorial After World War (WW) II in Leyte, Philippines: Images Of The War In Tacloban & Photos Of San Juanico Bridge

The new generation may not have witnessed the struggles and sacrifices of war but they have fully benefited the freedom from it. This includes myself. In 1941 the Japanese invaded the Philippines. The World War II started around that time and stayed on for years.

Specifically in Leyte, Philippines, a quiet town whose livelihood depends mainly on coconut and rice became war-torn at the break of dawn. Thousand lost their lives and destroyed properties many months afterwards.

The capital of Leyte is Tacloban City. Today, there are several landmarks in the city, or within a few miles around it, to remember this world-changing war. You can visit the city by airplane, bus or car. Though surrounded by the Pacific Ocean, huge marine passenger vessels no longer ply the route as often as they used to.

The McArthur Park (it has an adjacent Beach Resort) is located in Palo, Leyte, a few minutes away from the city of Tacloban. This is the exact location where General Douglas McArthur landed in 1944. He didn't win the war in his first visit to the Philippines in 1942 but he promised that he will be back. This landmark inscribed his words "I shall return".

He indeed came back in 1944 and landed in Leyte. The whole country was liberated from the Japanese occupation in 1945.

At present, the Leyte Landing has a memorial that is adjacent to the MacArthur Park Resort. It is a famous tourist site in Tacloban City. The coast line along the resort is called the "red beach" by the locals. The name of the beach was derived from World War Two when thousands of soldiers died along the coast. Dead bodies where all over the shore, the sand, the waters and the coast. The red beach means the soldiers' blood who sacrificed their lives for the freedom of the Filipino people.

After the war, General Douglas MacArthur went back to Tacloban City on several occasions. Until the early sixties, he frequently visited the city and its neighboring localities. Before WW II, many Americans have already migrated to Tacloban. They became traders and managed successful businesses around town.

The American families who settled in the city became Gen Douglas MacArthur's friends. One of his known supporters,the Price's family, converted its residence (The Price Mansion) into a mini-museum of WW II pictures and Gen MacArthur's historical journey towards the liberation of the Philippines.

A Hotel with WW II Memorabilias

Hotel Alejandro in Tacloban City have the World War II memorabilia on display. You will see a lot of pictures and objects from the war. This hotel is owned by one of the city's own affluent families, the Montejos. The World War II family treasures are on display in the lobby itself.

There are many black and white pictures of the war, paraphernalia and souvenirs that the Montejo family was able to collect over time. The family patriarch has witnessed and survived the World War II itself.

San Juanico Bridge is the longest bridge in the Philippines. It is said that this is Japan's repatriation to Leyte for the damages it has caused during World War II. It was renamed Marcos bridge during the Marcos government regime. After he was toppled down by the bloodless Edsa Revolution (1986), the bridge has been restored to its original name. It is a 2 mile in length that crosses the islands of Leyte and Samar.

If you are on the side of Samar island, the bridge forms the letter "S" and becomes letter "L" as you approach the island of Leyte.

Capitol Building, the typical pillars of American architecture. It currently houses one of the country's prestigious schools and government funded college scholars, the University of the Philippines.

The local government also uses this building as their offices. The Capitol is located within Tacloban City. The floors are made of marble and despite the tropical weather, it always feels cool inside. The newer generation are enjoying the 100-year old building as well.

The World War II is over and what remains are stories from those who survived. My mother fondly recalled when she was in elementary school, they would hear the sound of the siren in the middle of the class. It signifies that the Japanese war planes are flying above them and will soon drop bombs. They will run out of their classrooms and jump into their bomb-shelter. These are the canals alongside their school building.

My grandparents had their own foxhole at home. It was covered with plants and vines like bitter melon, squash and a flowering plant, Gumamela. The hole on the ground was huge that it can fit 10 people in it. Upon hearing the warning sound of the siren, they will scramble towards the foxhole for safety.

My mother, aunts, uncles and every person from Tacloban have to greet each Japanese soldier they meet on the streets. The required procedure to greet is to bow down from the waist up. They have to say the word "kumbawa", a greeting of respect. Opposite of that meant their lives were on the line.

The Philippines was liberated by the Americans in 1945. Up to this day, the United States have a strong western influence with Filipinos. It is the only country in Asia whose population can speak fluent English. Since the liberation from the Japanese occupation, they taught the Filipino people valuable education using the 3-R's - Reading, wRiting and aRithmetic. English has remained the first language in the Philippines' school system since then. In the past few years, the Department of Education has approved the use of Tagalog as the medium of teaching in schools. That is, if the school is willing to adopt the use of the national language.

After seven decades, the long standing relationship between the two countries still holds today. What's next? I hope there is no more grave war after World War II.

Copyright © 2012 The Girls. All rights reserved. 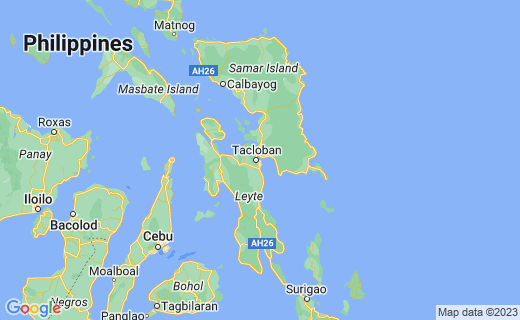 "As the Philippines begins to experience renewed vigor in its business climate, President PNoy is prioritizing the building of infrastructure to sustain greater investment interest in the local market," it added.

P251.6 million has been alloted for improvements in the Tacloban Airport project while the Dipolog airport project has an estimated cost of P66.9 million.

The Tacloban Airport, which currently services flights to and from Manila and Cebu, is the eighth busiest airport in the country with passenger traffic over one million, the DOTC said.

An improved Tacloban Airport is also expected to boost tourist arrivals to Tacloban City's attractions such as the San Juanico Bridge, Calvary Hill, the Price Mansion, and the Maria Kanon Madonna of Peace Shrine.

"Tacloban is also the gateway to tourist destinations including the Calbiga Cave complex, the beaches of Guiuan, and the new surfing hot spot in Calicoan Island," DOTC noted.(http://youtu.be/dcPusqQWGjY)

Enduring What Cannot Be Endured: Memoir of a Woman Medical Aide in the Philippines in World War II
Buy Now