Zambales, the Beach Lovers Paradise , the Real Best Beaches of the Philippines

Boracay the Best. Are You Sure?

Just ask anyone that is what they will tell you that the best beaches in the Philippines are in Boracay. The bustling nightlife, the vendors selling "Rolex" watches and old US Silver dollars, Beach chairs and umbrellas for rent covering most of the famous white sand beach the expensive four and five star resorts, and beaches crowded with tourist from all over the world. Difficult land and water transfers from the airport. WOW what an experience.

Do not get me wrong Boracay's beaches are world famous and tourist from all over the world and every part of the Philippines do flock there every year. It is a wonderful vacation destination and it does have great beaches. To many people a destination gets to a point that it popularity over shadows why it became popular. The old joke “it is so popular no one goes there anymore” does apply in many ways to Boracay and their beaches. 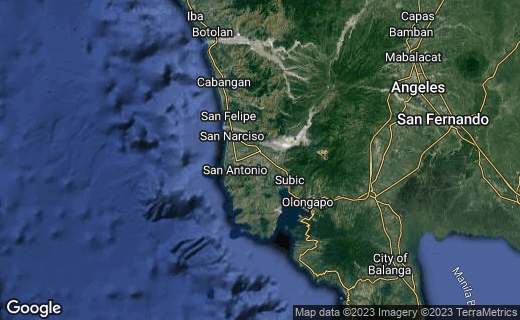 What is a "Best" Beach

What is the defining points to be considered a “best” beach? Is it the color of the sand? White sand beaches rank high in most peoples mind. Photographs taken on White Sand stand out, The contrast helps deepen the surrounding colors making the beach more inviting. It also gives the impression of cleanliness. These beaches are only found in the tropics and some semi tropical areas. White Sand Beaches get their white color from corals and shells broken down by wave action and carry to the shore. Another personal preference to consider is wave action. Calm blue waters are popular with many people while some prefer a bit of a surf without an undertow. What support facilities are important for a “best” beach and closely related how many people should be around?

What is the best is subjective, I was once with a group of fifteen people on a wonderful beach in Guadeloupe (French island in Caribbean) : two miles of pure white sand shaded with palm trees, plenty of space between people, a selection of hammocks, the water was crystal clear, mirror flat and warm, you could walk out a hundred meters from the shore and the water was still just chest high, to top it off there were bikini clad waitresses delivering drinks and snacks along the beach and to waist high water. A perfect as that may sound to some, one of the girls was heard saying that it was the worst beach she had ever been on. Her problem with it was that a portion of it was clothes optional. In my case, the best beach will likely be different depending on what I plan on doing and my mood.

Many of those who love the beach for a beach and not as an canvas to be seen on, look towards Zambales for a beach scene. The Zambales coast is kilometer after kilometer of fine beaches,The color of the sand varies along the coast. Some of the beaches are white sand while others are brown or gray. The 170 plus km of shoreline in a lightly inhabited province means extensive uncrowded beaches. The beaches are easy to get to. From the Manila area, you can reach the beaches in a three hour drive once you are at the edge of the city.

San Antonio is the southern most Zambales town with beaches on the South China Sea. It is just a thirty to forty five minute drive past Subic Bay and is easy to reach by both private and public transportation. Buses from Manila and near by Olongapo on their way to Iba pass through San Antonio. A short trike ride from the National highway will take you to the beaches. The beaches here are normally very wide with sand ranging from white to a light grey or brown. Each year many species on endangered sea turtles return under the cover of darkness to lay eggs. The resorts are mostly small family own establishments with most of them located in Barangay Pundaquit (also sometimes spelled Pundakit ) which is about ten minutes from San Antonio proper. There is one upscale resort in Pundaquit. Punta De Uian Beach Resort is a large resort with a wide range of room types and special features. sitting on the wonderful beach on Zambales coast of the South China Sea.

Punta de Uian and the Crystal Beach Resort, a little further north in San Narciso, are also known as surfing resorts. While the rainy months are generally not the best for beach goers, for surfers it is the best time. The best waves are from May to November along the coast of Zambales. The waves here range from soft to powerful depending on the weather and the breaks. In surfers lingo a break is a permanent obstruction such as rocks, underwater sand bars, coral reef, or even the shore itself that causes a wave to break, forming waves that can be surfed. There is at least a dozen good breaks between the towns of San Narciso and San Antonio. One break, right in front of Crystal Beach Resort, is good for beginners because of its gentle waves. During stormy weather the waves are bigger and can produce good tubes and power for the experienced surfers. The Crystal Beach Resort host many surfing competitions each year, some for beginners and has its own school.

Near the resort is also the High 5 Lahar Break, considered the most reliable break in Zambales. The underwater obstruction of this break is unique. The break was created by lahar from the eruption of Mount Pinatubo. "Lahar " is an Indonesian word , that describes volcanic mudflows. Two additional breaks nearby were also created by the Mount Pinatubo eruption.

The San Miguel section of the town San Antonio has an interesting break that is good when the swell is small. It is a right hander that breaks over sand. Locals say this is a good place to be when there is no chance of waves elsewhere. Just to the south is Pundaquit, also part of San Antonio. There are a number of breaks along the coast here including those caused by reefs and underwater sand bars. The stretch of beach in front of Punta De Uian is a favorite hang out for the local surfers with a number of different breaks to choose from.

Next time your looking for a beach getaway, think Zambales