A Visit to Holy Lakes and Ponds near Kumbla

Kumbla is a coastal town by the Arabian Sea in Kerala of South India. It is a small town with some fisheries and agricultural market activities. The place is also known as Kumble, Kanyara, and Kanipura in the location nomenclature. The nearest airport is Mangalore Airport. The nearest port is New Mangalore Port. The nearest railway station is Kumbla and buses ply by the NH-66 on Mangaluru-Kasaragod route through Kumbla.

When you travel on the roads of this area you may see some areas full of hard volcanic rocks and in most of the other places, there is red laterite soil. There are very fewer shrubs or trees on rocks. Even if some plants are seen, it will be of bonsai-like growth due to hard substratum with limited nutrients and water.

There are some interesting places which are prominently known for the ponds and lakes. These reservoirs are important in terms of ecology and due to the temples associated with the lakes. More interestingly these lakes are on the craters of the volcanic rocks. Geographically and geologically interesting formations. These rocks are all of the different tiny herbs peculiar to the rocky habitat.

If we have to cut these rocks with pick mattock, it is very hard and herculean effort is required to break the hard surface. Unlike rocky uphills, the valleys are evergreen. Farmers cultivate paddy, areca nut in plantations. Recently there are hamlets in these rocky areas, otherwise, in the olden days, the rocks were majestically barren with human dwellings restricted to the valleys alone.

Those who are dwelling on these rocky areas have to buy soil moved from other places or have to depend on soil-less gardening, gardening mix or peat and coir pith, etc. Without addition, the rocks are covered by slimes, blue-green algae, mosses and tiny ferns, some thorny and tiny flowering herbs, but nothing taller. Some areas are covered with nice grasses.

It is Lord Shree Ananta Padmanabha Swami Temple. It is a well-known place of pilgrimage in the locality. Pooja timings here are at 7 AM, 12 noon and 7 PM every day.

Ananthapura is a well-known lake temple near Kumbla of about 5 km distance. Not only that, it is an attractive landscape, but also a bounteous water reservoir.

It is furthermore famous for the god’s crocodile which is a harmless amphibian here. People live by the side of the lake without fear. The crocodile is called “Babhiya” by name. It is offered with rice meals every day after temple worship rituals by the temple priest.

The lake is a natural laterite lake of about 20 feet depth. Sides of the lake are very high on the eastern side and low on the western side. There is an outer path around the lake for putting a circular movement around. Devotees first enter the area of the temple by removing their footwear. First, put one or two circles around the lake. Then there is a path of steps cut on the laterite rock on the western side. There they dip their legs and palms to purify. Then by the eastern side, there is entry to the temple through climbing down the steps to the lake.

On the North-Eastern side of the lake, there is Jaladurga abode, below which there is a cave, tunnelling to infinity, becomes narrow. During some attack, the deity got vanished through this tunnel, which also opens to the lake at Thiruvanathapuram Anantha Padmanabha Swami temple lake.

The main temple or Sreekovil of the Sanctum Sanctorum is situated at the middle of the lake. The temple is connected with a concrete bridge now for the movement of priest and devotees.

The Temple festival falls in February, usually on the Chaturdasi of Phalguna month of Hindu lunar calendar. The main attraction of the festival is a night procession of the lord around the lake by boat which is decorated by lights. It is a glorious sight of lighted both with the Lord with reflections in the water and crowd watching around the lake. 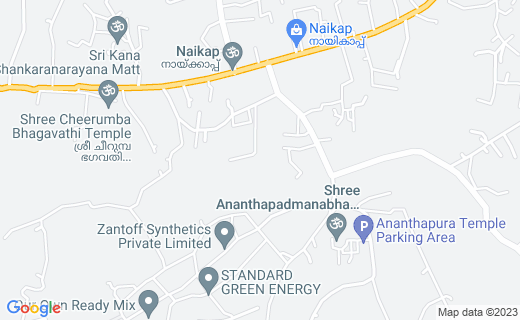 Mujungavu is the temple of Parthasarathi Sreekrishna Swami. It is about 5 km from Kumbla town.

In the Hindu Calendar, Tula month Sankramana day is celebrated as the holy dip day in the pond, usually, it falls on the 17th of October every year. Thousands of devotees take a dip, starting from morning 3 AM, till noon and offer prayers.

There is a sacred grove associated with the pond. Deity worship and cockfight as a formality.

These twin pond – lakes are by either side of the road from Kumbla to Perla. Slightly situated away from the road and therefore, not noticed easily.

There is deity worship related to the Anadipalla.

The Mukarikanda pond is a big reservoir now, as the bund of which is now clad with Ferro-cement and it is aimed to enrich the groundwater.

It is a part of the Kumbla fort built by Ikkeri Naiks. It has the more or less same structure of Bekal and Kasaragod Fort. It is built from volcanic lava rock, but now in a dilapidated form. However, there is a tower, which is built for watching the movements in the Arabian Sea and adjoining areas. There is an easy path to climb this tower. On top of the tower, we can see very beautiful scenery, all around. The view of “Gump Hills” near Permude is seen as a very beautiful landscape in the early morning and the afternoon.

A Hanuman temple associated with the fort is by the NH-66 Highway. Travellers stop there and offer prayers and proceed.

Kumbla mangrove ecosystem is an evergreen ecosystem which is only of about 30 to 40 years old but has a substantial area. Please see my separate article on this for more details “Ecotourism at Kumbla: South Indian River Mouth Mangrove”.

Lava rocks are everywhere in this area and are available for free to pick on-site near the ponds and lakes. These are decorative for the container plants and bonsai plants.

Holy sea bath is performed at Kumbla Beach on identified days by Hindu community. Thousands of people take a holy dip on the same day.

The totality of ecotourism and pilgrimage

Some of the minor ponds like Shantipalla, near Kumbla and Kesarpalla near Soorambail, are getting ready to vanish due to dumping. At Nirchal situated 15 km away from Kumbla, there is another water reservoir.

In totality, a visit to Kumbla and its vicinity has many things to see, including tradition, geography, landscape and ecosystems. All together will make the entire programme worthwhile for the tourists to spend a day or more. The Maipady Palace also is visited by some of the tourists and students of History. It is also worth studying the role of ponds on biodiversity, bird species and their migration, role on the other vegetations on the banks, microclimatic influences, etc. When there is vegetation over the rocks, these are carbon sinks. In the winter and summer these dry and get covered with some organic carbon, which is washed away during the next rainy season to the ponds and rivers. Some of these and the influence of microorganisms have to be fully understood to acknowledge the value of the ecosystem as a whole.