The Mysterious Alabama Hills of California

The Alabama Hills is a small, fascinating area just off of Highway 395 in California.

The area has been used as the setting in numerous movies, commercials, and music videos.

The weathered boulders that make up the area are extremely beautiful, sitting at the base of the sheer eastern face of the Sierra Nevada, and yet so many people don't even know it's there and so drive right past.

Why are they called the Alabama Hills when they aren't in Alabama?

It seems odd to have an area in California, clear across the country from the state of Alabama, named the Alabama Hills. This area is actually named for a Confederate warship named the Alabama. Many miners in the Lone Pine area were Confederate sympathizers, and hearing about the exploits of the warship, The Alabama, they named numerous mining claims in honor of it. Eventually the entire area became known as the Alabama Hills.

When the Alabama was sunk by the Union Kearsarge in 1864, the Union sympathizers to the north named a mining district, a mountain pass, a mountain peak, and a town after their favorite warship, The Kearsarge.

Weekend Explorer Eastern Sierras, California
Episode Highlights: This is a land of stark contrasts and incredible scenery. Come along as we hike to a High Sierra lake on the trail to the highest peak in the continuous United States;explore the Alabama Hills, site of famous movies starring John Wayne, Douglas Fairbanks Jr., and many others
Buy Now

Get Lone Pine in the Movies: Commemorative Edition

Movie History of the Alabama Hills

The Alabama Hills have a long history of being a filming location. There have been numerous movies, commercials, and music videos filmed there and new ones are often added.

See Where the Movies Are Made 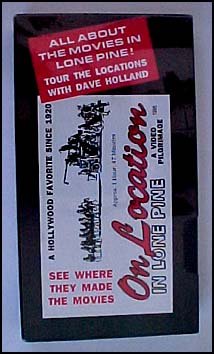 On Location in Lone Pine See Where the Movies Are Made
See where the movies were made in Line Pine and the Alabama Hills.
Buy Now

Description from the maker of the video below:

"I give commentary on a few examples of movies filmed here, but many more have shown this area in them (Ex. Tremors, Hopalong Cassidy movies, etc.). This one may take some pauses and repeated watching to figure out everything I show since I did not explain everything. Some is obvious, but some things are subtle.

I have an old blog on this location:

His blog is very good and has information on several different spots in the Alabama Hills and what is filmed where.

During the Lone Pine Film Festival

Lone Pine (CA) (Images of America)
This book is filled with interesting images of Lone Pine and its history.
Buy Now

Eastern Sierra: Twenty Postcards (Companion Press Series)
Postcards are a great way of finding little nooks and crannies you can search for while in the area, as well as giving you ideas of pictures to take, or replacing the pictures all together.
Buy Now

Learn More About the Geology of the Basin and Range

The Broken Land: Adventures in Great Basin Geology
Frank DeCourten is a professor at Sierra College and I've taken several classes with him. Not only is he an all around great guy, but he's also a great teacher and writer. This book is about the Basin and Range, the geologic area between the Eastern Sierra and the Wasatch Mountains in Utah. It is a land of extension and has expanded to double its original size. The Alabama Hills are just a small part of the overall complexity of the area. Learn about the Basin and Range, why it is being created, what it is, and how it affects you by checking out this great book.
Buy Now

More Information on the Alabama Hills

The Arches of the Alabama Hills 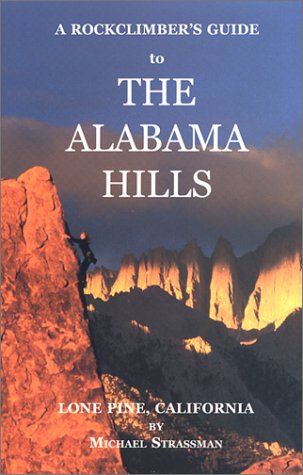 A Rockclimber's Guide to the Alabama Hills
Buy Now

What do you think of the Alabama Hills?