Cycling the Parkway is Beautiful

On Memorial Day, my husband and I decided to bike a small section of the Blue Ridge Parkway. Lots of road bikers take to the curvy paved roads of the parkway. It was a lazy ride; it was only about 20 miles. I say lazy because my brother-in-law regularly bikes 100-mile sections of the Parkway. As of yet, I haven’t been that ambitious, but perhaps one day soon I will be.

In any case, the ride was spectacular. It is a great way to see the Western North Carolina mountains and countryside. After growing up in the vegetation-sparse Rockies, I continue to be amazed at the lush growth, flora and fauna of the Appalachian Mountains.

Of course, we could have chosen to hike, drive, or even camp on the Parkway. Those are entertaining activities, as well. Alas, there was only enough time for a short bike ride.

Bike Tips On the Parkway

A few tips when you cycle the Parkway:

Before we began our ride, we decided to start at the Folk Art Center at milepost 382. It’s located in Asheville, NC. Once you exit onto the Parkway, however, it feels like you enter a pristine world that seems so far away from the city.

We pulled into the parking lot, a bit surprised it wasn’t full. It was Memorial Day and we thought there would be more traffic. It was nice having space to lay out our bikes and get ourselves ready for the ride.

Starting at milepost 382, we headed north. Immediately, we began to climb. In that stretch of highway, I didn’t realize that we would gain 1,000 feet of elevation in just a few miles!

But, the effort was worth it. Along the ride, we saw wildflowers and beautiful rock formations. I kept stopping to photograph beautiful flowers, plants and scenery. Because the elevation varies so widely on the Parkway, different stretches offer various flowers that won’t grow in other parts of the region.

A few miles into the ride, we came upon the Haw Creek Valley Overlook. We saw a beautiful view of Haw Creek Valley, in Asheville, NC. This was the reason we decided to bike the Parkway. The breathtaking views of the valleys are incredible. They’re also a photographer’s dream because of the richness in color, along with the beautiful wildflowers that bloom abundantly in spring and summer.

The diversity in trees, plants and flowers are part of why the Parkway is famous. Many different types of habitats exist in the 469-mile stretch of road. It’s a protected area as well. 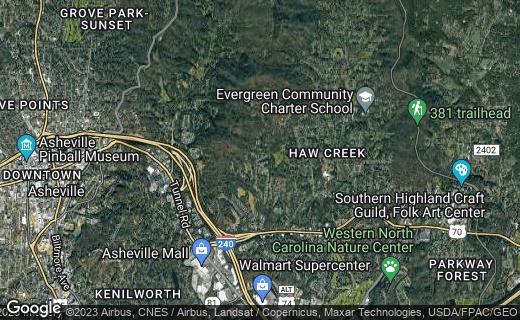 Have You Ever Visited the Parkway?

As we continued on our journey, we continued to climb. I was thankful that there were overlooks every so often to take in the views and to rest up a bit. We stopped at Lane Pinnacle and Tanbark Ridge Overlook. Each time, there were a few other Parkway visitors enjoying the breathtaking views.

People seem really nice and relaxed on the Parkway. We often would talk to a passer-by as we journeyed. We met people from Florida, eastern North Carolina and as far north as New Jersey.

We happened upon one of the 26 tunnels on the Parkway in North Carolina. It wasn’t too long and we rode fast – it’s always a little scary riding alongside cars in dark, confined places.

We rode to milepost 372 and turned back. After all that elevation gain, I was indeed ready for lunch. We rode back, quickly and swiftly because it was mostly down hill.