I remember as a kid going to the Hamilton Airshow with my Aunt and Uncle every year. My Uncle has always been into all things aviation and he loved sharing that passion with us. There would be planes on the tarmac to see up close and of course the ones in the sky putting on a show. It was a mix of old classic warplanes and some of the more modern planes.

My Uncle had lost his job recently and had been feeling down, so I decided to surprise him with a trip to the Canadian Warplane Heritage Museum located in Hamilton, Ontario, Canada. Inside the aviation museum there is plenty of military aircrafts to see including World War II planes and WWII bombers including an Avro Lancaster. There is also information on some of the important contributions that Canadians made in the field of aviation. So while I had intended to just go to help cheer up my Uncle, I found myself fascinated as well.

The Avro Lancaster Mk X that you can see here is one of the only two airworthy Lancasters in the world. What I found fascinating about the museum is that the planes are not just on display. They are also actively restoring some of the planes so that they can be flown. You can actually see the inner working of the planes as they are doing the repairs.

The Complete Illustrated Encyclopedia of the Lancaster Bomber: The history of Britain's greatest night bomber of World War II, with more than 275 photographs

This book is all about the Lancaster. It talks about the Dambusters Raid, the designer, and the builder. It is a fantastic book for the aviation fanatic in your life.

One of the ways my Uncle expressed his passion was building model airplanes. So he bought one of these so he could build his own Lancaster bomber with this model building kit.

The Spitfire was used in many important battles during WWII. It was used during the Battle of Britain to target the high flying German fighters. In September of 1940 it helped in handing the Luftwaffe their first defeat. There were also eleven RCAF Spitfire squadrons that were there to provide air-cover during the D-Day landings.

With this you can display your own Spitfire. 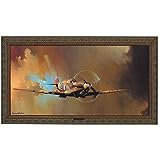 Perhaps you would prefer this beautiful painting. It would make a great piece for the home or office.

The G-Suit Is A Canadian Invention

They have a display all about the G-suit (otherwise know as anti-G-suit). I had no idea that it was actually a Canadian invention. Dr. Wilbur Franks designed the Franks Flying Suit. A suit made from fabric but had water filled rubber bladders that would prevent the blood from pooling the pilots lower extremities.

He also provided the drawing for a centrifuge which was constructed by a team from the University of Toronto This would be critical for testing and improving the suit design. It was also used for training pilots to deal with the G forces that they would experience in flight.

There was something that drew me to the Canadair CT-114 Tutor. While we there I didn't know what it was, but after having looked through the guide book I was able to figure out why. This was the type of plane that the Snowbirds used to fly in when we went to the Hamilton Airshow. I remember being in awe of all the amazing maneuvers they were able to do.

A picture with 4 of the most elite Aerial Expedition teams in the world.

The Royal Canadian A. F. Snowbirds - Program Signed Circa 1994 with co-signers

A great collectible item for the Snowbirds fan in your life.

The Canadian Warplane Heritage Museum also covers some of the history of Canadian women in aviation. They have a display about Eileen Vollick Canada's first licensed woman pilot. She was also the first woman in the world to be trained on a ski plane.

It also covers some of the Canadian women who flew in WWII with the forces in England and the United States.

Helen Harrison: When the war broke out her application was rejected by the RCAF. In 1942 she was accepted to serve as a ferry pilot for the ATA (Air Transport Auxiliary).

Violet Milstead: In 1945 she flew the planes to Europe and flew the damaged aircraft back. During a 3 week stint she flew over 36 planes.

- Own and operate a flying school

- Own and operate an airport

The B-25 reminded me of all the WWII bomber planes that you see in the movies. It has the all the markings of an actual squadron and of course the drawing of a pin up girl on the side. The B-25's were used in tactical bombing, tank busting, and anti-shipping strikes.

Visiting the Canadian Warplane Heritage Museum is an excellent way to celebrate the Royal Canadian Air Force's 90th Anniversary. When you go they have volunteers there who will talk to you about the history of the planes and flying. Some of these volunteers are members of the RCAF.

These volunteers have actually piloted the aircraft that is on display. This truly adds a unique experience than most museums are able to offer. They have a flight simulator there that you can use to try your hand at flying a plane. I was lucky enough to have one of these volunteers help me with learning to take off, fly, and land a plane.

How Do You Show Your Love of Planes? - Reading Books, Making Models, Plane Artwork, Going to an Airshow or Museum