One of the most strikingly beautiful swimming spots of the Yucatan is Ik Kil Cenote- a natural sinkhole near the Mayan ruins of Chichen Itza. The cenote (sometimes called Ikkil Cenote, Cenote Ik Kil, or just plain Ik Kil), is part of the Ik Kil Archaeological Park, and is a popular tourist destination.

The pool of water in the cenote is located 85 feet (26 meters) below ground (the pool itself is 40 meters or 130 feet deep), and is framed by rays of light, vines, vegetation, and small waterfalls. Visitors can get to the pool by walking down a carved staircase, but some folks choose to jump or dive in- at lest on special occasions. Ik Kil was part of the Red Bull Cliff Diving World Series in 2011 and 2010!
Though normal visitors don't have the opportunity to jump from the mouth of the cenote into the center like professional divers, there is a platform inside the cenote (maybe 15-20 feet up) from which people can jump into the water (I highly recommend it).

Ik Kil is around 37 minutes from Merida and practically next door to Chichen Itza.

If you plan on swimming at Ikkil Cenote on the way to, perhaps, a visit to Chichen Itza, be sure you do it before 1:00pm. After that point, the crowds of tourists tend to ruin the nice effect. That said, the cenote is pretty clean when one considers how much traffic it must get. There are showers at the mouth of the cenote, and everyone is encouraged to rinse off before diving in. What's more, there are lockers for stashing your goods, nice clean bathrooms, and changing areas.

Swimming in Ik Kil Cenote is a fabulous experience. Though most cenotes I've swam in are pretty chilly (especiailly compared to the warm ocean), Ik Kil feels quite warm, and it's dreadfully fun to jump off the ledge into the water, get splashed from the water falls, and watch the small catfish swirling around.

Keep in mind that if you DO swim, you'll end up in a lot of photos. Not everyone who visits the cenote strips down and dives in, in fact, most visitors present when I was there were perfectly content standing outside the cenote with their camera and watching people paddle around on their behalf (that said, it was a cool, cloudy day).

Ik Kil is definitely the most touresty cenote I've been to, but it's also very beautiful, so I say it's well worth the visit! 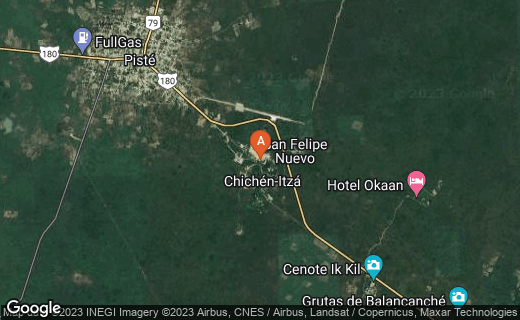 Ik Kil Cenote is about 4km away from the entrance to Chichen Itza.