Discover Canada Guide is a free resource to help eligible Canadian permanent residents prepare for their Canadian Citizenship Test. One of the requirements to become a Canadian citizen is to pass the citizenship test in 2014.

The test comprises of 20 multiple choice questions with a 75 percent passing score (i.e. you have to answer 15 out of 20 questions correctly) within 30 minutes.

The guide is the official booklet issued by Citizenship & Immigration Canada (CIC) and the test is based on information presented in this guide. The study guide is also a great primer for those contemplating immigrating to Canada or anyone who wants to learn a little more about the Great White North.

What brought you to this web page?

What is the Canadian Citizenship Test Process in 2014?

The purpose of the Canadian Citizenship Test is to assess two basic requirements: knowledge of Canada and rights & responsibilities of citizenship, and adequate knowledge of English or French.

At the time you apply for your Canadian citizenship, CIC government officials will check your status in order to verify that you are eligible to apply, and ensure you meet the requirements. Depending on your case, your citizenship application could take several months (generally between 8 to 12 months). Once your application is approved, by the CIC, you will receive a notice to appear for the Canadian Citizenship Test.

On the day of your citizenship test an Immigration Officer will check your required documentation. You may be required to complete a form with details likes name, address, work and educational history for the past 5 years. You will then be called on to verify your identity and asked a few questions about your most recent job, if you visited the U.S., if you left Canada, how many children you have, etc. They may also check the stamps in your passport. The questions asked depend on each case.

If you fail the written citizenship test, CIC will send you a notice requesting you to appear for a short interview (approximately 15 to 30 minutes) with a citizenship judge. At the interview, the judge will ask you the test questions orally so you can show that you meet all the requirements.

After the test, if you pass and meet all other requirements, you will receive "Notice to Appear to Take the Oath of Citizenship". This document will provide details like the date, time and place of your citizenship ceremony in 2014. 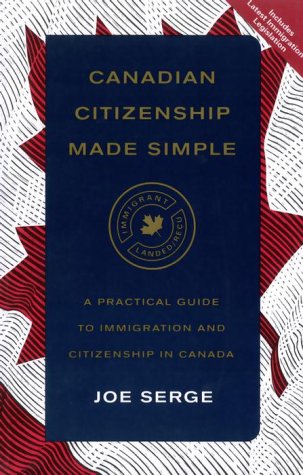 Canadian Citizenship: A Practical Guide To Immigration & Citizenship
The Canadian Citizenship Guide written by Joe Serge is a practical and easy-to-understand guide for individuals who are contemplating immigrating to Canada or becoming Canadian citizens. It explains the whole process, the different types of categories, and uses a step-by-step approach to help you understand citizenship requirements and eligibility.
Buy Now

Preparing for the Citizenship Test with Discover Canada Guide

One of the first steps in preparing for your Canadian Citizenship Test is to read the Discover Canada Guide at least twice and then take some Citizenship Practice Tests. That is, don't just rely on taking a whole bunch of practice tests.

You can even ask one of your friends or family members to assist you practice answering questions. In the following sections, we will cover various aspects of this guide so you can prepare for your citizenship test. The study booklet is divided into various sections, each of which is explored below. Your test questions will be based on information provided in this guide, so read the guide thoroughly.

This section in the Discover Canada Guide focuses on rights and responsibilities of Canadian citizens under the Canadian Charter of Rights and Freedoms. Also known as the Charter, it protects fundamental freedoms like mobility rights, Aboriginal Peoples' rights, official language and minority language rights, and multiculturalism.

With the above citizenship rights comes responsibilities which include obeying the law, taking responsibility of oneself and family, serving in jury, voting in elections, helping others in the community, and protecting our heritage and environment.

Who We Are as Canadians

This section of the study guide covers information about the founding peoples. Canada is a constitutional monarchy and the three founding peoples of the country are the Aboriginal, French and British. Ancestors of Aboriginal peoples first migrated to here several thousands of years, from Asia.

The three recognized Canadian Aboriginal groups are the First Nations, Metis and Inuit. Canada is known for its diversity because of the millions of immigrants that migrate from various parts of the world. The two official languages recognized are English and French.

The History section of this study guide covers the country's rich history and focuses on subjects like the Aboriginal peoples, the first Europeans and their coexistence with the Aboriginals, the naming of Canada, the beginnings of democracy, the growing economy and significance of fur trade in the country.

Other historical facts included in this section are the formation of the Confederation, in 1867, which saw Sir John Alexander Macdonald become Canada's first Prime Minister. Other notable facts include creation of different levels of government, building of the Canadian Pacific Railway (CPR), the nation's involvement in the First World War and the Second World War, and women's right to vote.

In the Modern Canada section of the citizenship study guide you will find information the country's prosperous trade and economic growth; the discovery of oil in the province of Alberta in 1947; implementation of the health care plan, employment insurance, the Canada and Quebec pension plans; and publicly funded education.

How Canadians Govern Themselves

This section of the study guide is all about the country's system of government. As a country, Canada is considered a federal state with a parliamentary democracy and a constitutional monarchy. The government is represented at various levels, namely, federal, provincial or territorial, and municipal governments. Each of these levels of government have distinct roles and responsibilities.

In this section, you will also learn about the three branches of government, namely, Executive, Legislative and Judicial. As well as the three parts of Parliament which are the Sovereign, the Senate and the House of Commons. The House of Commons is represented by members of Parliament elected by the people, whereas the Senate is represented by Senators appointed by the Governor General.

In this section of the Discover Canada booklet you will learn about the democratic process in which eligible Canadian citizens elect representatives (Members of Parliament or MPs) to the House of Commons. Canada is made up of 308 electoral districts or constituencies which is a geographical area represented by MPs.

Canadian citizens, 18 years or over, can run in a federal election. And citizens who are at least 18 years of age and on the Voter's List, have the right to vote in federal elections by secret ballot. After the election results, the political party with the majority of seats in the House of Commons can form the government. The leader of this political party becomes the Prime Minister and appoints Cabinet Ministers.

On the other hand, the opposition political party who secures majority of the members in the House of Commons becomes the Official Opposition.

Quiz on Federal Elections in Canada

In the Judicial System section of the study guide, you will find information on Canada's legal system which guarantees everyone due process under Canadian law. The system is established on the "presumption of innocence" which means everyone is innocent until proven guilty. Canadian law is enforced on everyone equally, including judges, the police and politicians.

The structure of nation's judicial system consists of the Supreme Court (Canada's highest court), federal courts and provincial courts. The police also play a role in terms of enforcing and upholding the law.

This section of the guide focuses on symbols which have special meaning to Canadians. Some of these symbols represent objects, events and people.

Canada being a constitutional monarchy uses the Crown as a symbol in various sectors of the government. One of the most popular symbols of the country is the maple leaf which appears on the Canadian flag among many other places. The beaver, a semi-aquatic rodent, is officially designated as Canada's national animal. "O Canada" is Canada's National Anthem.

The Coat of Arms is another prominent symbol adopted by the country along with the national motto "A mari usque ad mare" which translates "from sea to sea". Canada also recognizes citizens for outstanding contributions. The Victoria Cross is the highest honour awarded to Canadians for self-sacrifice in the presence of the enemy.

In this section of the booklet, you will learn about Canada as a trading nation. Commerce in this country goes back to the early days when the first Canadian companies competed for the fur trade. It has one of the largest economies in the world, United States being Canada's largest trading partner.

Free trade with the United States was enacted in 1988 and was extended with Mexico in 1994 in the North American Free Trade Agreement (NAFTA). Canada's three main industries are natural resources, manufacturing and services.

Canada's Regions of the Discover Canada Guide explores the geographical composition of the second largest country in the world. The country is divided into five distinct regions, namely, the West Coast, the Prairie Provinces, Central Canada, the Northern Territories, and the Atlantic Provinces.

Canada has ten provinces and three territories, surrounded by three major oceans: the Pacific Ocean in the west; Atlantic Ocean in the east; and the Arctic Ocean to the north. The national capital of the country is Ottawa, located in the province of Ontario.

Alberta, Saskatchewan and Manitoba are known as the Prairie provinces of the country. Whereas, New Brunswick, Nova Scotia, Prince Edward Island, and Newfoundland & Labrador form the Atlantic provinces. The Northern Territories include Yukon, Northwest Territories and Nunavut. The provinces of Ontario and Quebec are part of Central Canada. And finally, the province of British Columbia is called the West Coast.

Materials on this web page were produced and/or compiled by the author for the purpose of providing Canadians with direct access to information about the programs and services offered by the Government of Canada used with permission.