It has been several years since my last stop in Denver, Colorado. This time I was not flying through to other destinations, but staying in town for a long weekend, not all vacation! The approach into the airport was almost blinding as the snow appeared in our airplane window several miles outside of the big city! You could still see the Fall colors in the many trees around town, but it was evident there had been recent snowfall by the remaining white piles of fluff still laying on the ground. What a fun time to visit!

The mountain views from any part of Denver are beautiful. The mountains tower in the distance, reminding visitors that they are not in the Texas flatlands! Travel around this town is easy with a map and a GPS.

Our greatest discovery on this trip was the Sixteenth Street Mall in downtown Denver! This area of shopping extends for one and a quarter miles down Sixteenth Street. Sixteenth Street is lined on both sides of the road with shops, hotels, office buildings, and restaurants! The middle of the road is divided into two one-way lanes specifically for bus traffic. Pedestrians can hop onto a city bus and ride the entire length of the mall to their destination, or take short jaunts, for free.

The weather for our shopping tour was perfect. It was cool enough outdoors to want to visit the shops and yet it felt refreshing to go outside after browsing for awhile! The sun was shining, but it was that late Fall sunshine that does not warm the bones. We ambled up one side of the road and then down the other, visiting shops along the way! We discovered unique deli's, coffee shops, book stores and gift shops. All were well stocked and individually appealing.

While standing outside in front of a shop, late in the afternoon, we were surprised to see a very large group of people run around a nearby corner and head in our direction. Thankfully they ran past us and continued down the mall. It was as though they came out of nowhere! The shoppers quickly scurried to get out of their way!

There is no parking on this stretch of Sixteenth Street. Only the buses are allowed access to the two center lanes. Don't let that deter you from experiencing this great shopping area. We easily found parking on the street only a block away.

Cast your vote for Denver, Colorado In The Fall

Our trip home was on Sunday afternoon. We awoke to a very powdery sprinkling of snow that morning. By late afternoon, it was snowing heavily. As we waited at our gate to board the plane, I took pictures through the glass window. I have to admit that we were a little worried that our departure might be delayed. After de-icing our plane, we were able to depart just a few minutes late. The pilots made up for lost time during the flight home! Goodbye Denver, see you next time! 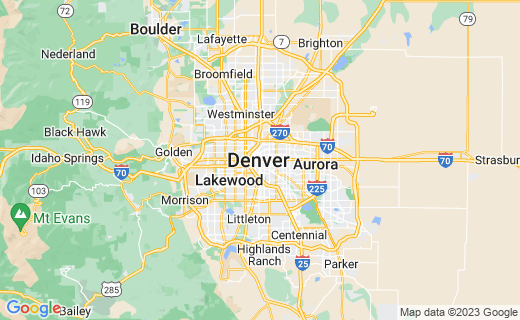