Have fun learning fast facts about Louisiana, The Pelican State! There are many Eastern Brown Pelicans on the coast of Louisiana. They have been a symbol of Louisiana since the early European settlers noticed how carefully they raised their chicks. They are the only dark pelican, and the only ones that dive into the water to catch fish. The pelican is Louisiana's official state bird and is on the state flag, the great seal, the state quarter, and state painting. The Brown Pelican became endangered by 1970 due to use of pesticides. Thankfully, more were brought up from Florida and were able to repopulate the protected coastline by 1995. Now there are about 40,000 Brown Pelicans nesting there.

Louisiana is the only state that doesn't have counties. Instead, it is divided into parishes. 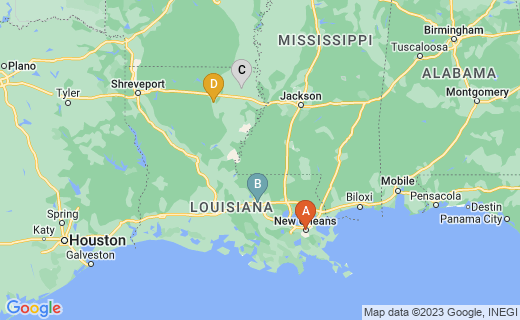 The Louisiana State Flag was designed in the 1800s but officially adopted in 1912. It pictures:

It is now known, that while pelicans take good care of their chicks, they DO NOT tear at their own flesh to feed their young. One of the parents lowers its bill down near its chest, and the chicks take fish from the parent's pouch.

The pelican is an old symbol of protection. Here it represents the state protecting the people and their land. The pelican was used in some Christian paintings as a symbol of Christ's sacrificial death.

10 Facts every coin kid should know

Louisiana's first inhabitants were Native Americans. Watson Brake is an archaeological site in northern Louisiana, possibly built around 3500 BC. Eleven earth mounds overlooking the Ouachita River are thought to be the earliest complex construction in the Americas. They could even be older than the pyramids in Egypt!

Poverty Point is an archaeological site in northern Louisiana, possibly built about 2200 B.C. - 700 B.C. Watson Brake could be 1900 years older, but Poverty Point is larger (3/4 of a mile across). It has six concentric dirt mounds separated by ditches earthen mounds and ridges overlooking the Mississippi River. 500-1,000 people may have lived there. Poverty Point was built before the Mayan pyramids.

How did Louisiana get its name?

In 1682, French explorer Rene-Robert Cavelier Sieur de La Salle (1643-1687) was the first European to travel from the Great Lakes down the Mississippi to the Gulf of Mexico. He named the state "La Louisianne" after King Louis XIV(14) of France. La Salle was hoping to find a western route to China.

Pierre Le Moyne d'Iberville built Fort Maurepas in 1699 near the entrance of Biloxi Bay because of its depth and easy shipping access. In 1702, Fort Louis was built where Mobile is today. d'Iberville met with Choctaw and Chickasaw leaders to develop military alliances and trade partnerships to compete with the British. Louis Juchereau de St. Denis founded the first permanent settlement in Louisiana in 1714 with the construction of Fort St. Jean Baptiste near present day Natchitoches.

Sculpture in front of Parliament Building in Quebec, Canada.

The Louisiana Purchase doubled the size of the United States. Before the Purchase, Louisiana had been under control of the Spanish since 1763.

State Symbols Coloring Book at the Louisiana Secretary of State

Louisiana Worksheets and Activities at ThoughtCo

In 1902, Swedish artist Thure de Thulstrup was hired to create a painting celebrating the Louisiana Purchase. The image shows the first raising of the United States flag after the transfer, at Place d' Armes, New Orleans, 1803 (now Jackson Square). For more information on this artist and painting visit the Cabildo State Museum.

France turned New Orleans over on December 20, 1803 at The Cabildo. On March 10, 1804, a formal ceremony was conducted in St. Louis to transfer ownership of the territory from France to the United States.

War of 1812 - 32 months of conflict between the United States and Britain, and their Indian allies.

1. Damage to the US Capitol after the Burning of Washington.

4. Death of Tecumseh at Moraviantown.

The Battle of New Orleans 1814 - Performed by Johnny Horton, Written by Jimmy Driftwood

This fun song is very special to me. It was a favorite of my late brother and we would have a blast singing this together. Check out the British version! I also found a cute Lego version, if you just can't get enough!