What is the Fleur-De-Lis?

The Fleur De Lis is a very controversial emblem. The history of this fascinating emblem stretches far back in time an has had many uses and legends behind it. The lily is now called an iris and still grows along the river Lys in the lands that were drained by the Franks. When this flower is pressed and dried it clearly reveals the three tiered emblem that is so popular to us today.

One of the earliest scenarios about this interesting symbol is that of Clovis, King of the Franks. It is said that the golden lily was given to Clovis at his baptism by the Virgin Mary, herself, as a symbol of purification. The thus "anointed" Kings of France later maintained that their authority was directly from God, without the mediation of either the Emperor or the Pope.

The lily was claimed to have been sprung by the tears of Eve as she left the garden of Eden. Other theories have said that Clovis adopted the symbol when he discovered the lily in battle as he tried to cross the river Lys. He was said to have successfully crossed the river at the same site that he discovered this flower and it led his army to victory.

In the 13th and 14th centuries the three petals of the flower were being described as representing faith, wisdom, and chastity by the the french and in Ireland they were said to represent the Holy Trinity. 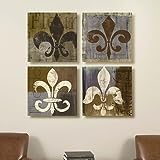 The Fleur De Lis of Today

Today the fleur de lis is used in many things. It is a popular art subject all around Louisiana because of the strong French heritage. The New Orleans Saints adopted the Fleur De Lis because it was a symbol of the city of New Orleans and of France's Bourbon monarchy. The legends that surround this mystical flower also attribute to the Saints because of the catholic religion's association with the flower.