Converting a family vacation to a heritage tourism opportunity, on the fly.

My wife and I are on a two-week vacation near Capital Reef National Park in south central Utah. Our daughter and her husband have a home on Boulder Mountain, near Teasdale, UT, that is our home base for this visit. As final activities planned have fallen into place, I realized that we are actually on a Heritage Tourism experience that I will share with you in this lens. I hope you enjoy visiting as much as I enjoy building it.

This photo is of Boulder Mountain across the valley to the south from the location I was standing when I took this photo. The house is at 7200 feet, just above the tree line, near the center of the photo. Capital Reef National Park is off to the left in this photo. Scenic Highway 24 runs east and west through this valley, Rabbit Valley, along with the Fremont River.

Explorer John Fremont brought his fifth expedition through this valley in January 1854. Not only the river bisecting the valley but an ancient local Indian band still carry his name; as well as a small town. Early Mormon settlers established Fruita, a settlement of orchards, that still bear fruit, that is now part of the National Park. Come visit this fascinating corner of the earth.

On Friday and Saturday we will be at the town of Fremont (actually a house overlooking the town) for a local historian lecture and field trip on some of Fremont's time in this valley.

On Sunday, May 20, we will be very near the path of the total solar eclipse. Another natural phenomena to go along with the historical and cultural aspects of our trip.

House on Boulder Mountain with Capital Reef in the background - Teasdale-Torrey, UT, valley below, the Fremont River flowing through it

This is the home my daughter, Annette Lamb, and her husband, Larry Johnson, built on Boulder Mountain above Teasdale, UT, a few years. This is where we are staying for this two week vacation. We try to visit two weeks in May and two weeks in September. Sometimes, of course, life gets in the way. We have a nice view from the back deck of Capital Reef National Park red 'waterpocket fold' moutains in the background.

This is an inexpensive 320 page book on the western explorations of Kit Carson and John C. Fremont. I have not read it, personally, but it appears to be a good introduction to their western travels that would have included the southern Utah region in the fourth expedition. 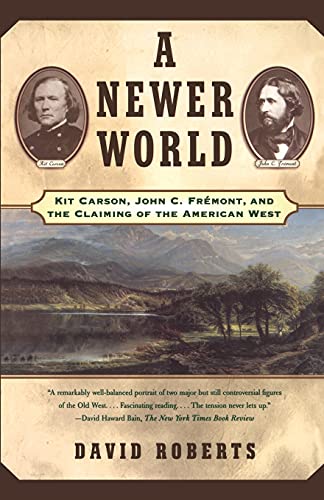 A Newer World : Kit Carson John C Fremont And The Claiming Of The American West
For interested persons, this book is a good place to start. As you learn more about Fremont and Carson and their journeys, you can more carefully choose from the many additional reading.
Buy Now

John Charles Fremont was the son-in-law of the famous Missouri US Senator Thomas Hart Benton. He was later elected on of the first two US Senators from the new State of California, in 1850, in his own right. He was a US Presidential Candidate for the new Republican Party in 1856; losing to Democrat James Buchanan. He served as a major general for the Union in the Civil War, again with records of both good and poor results.

He was always a colorful character with a colorful wife. Never a dull moment, when Fremont was around! ;-)

Photo of Fremont courtesy of Wikimedia Commons. Click on the photo to go to the Wikipedia article on Fremont.

Steve provides his class, at his home, near Fremont, with interesting weekly lectures and discussion on Wayne County, Utah, history, including people and families, places and events and tying them all together in meaningful and digestible segments.My daughter and son-in-law are finishing their second year of regular attendance; I was pleased to be able to attend my first in May 2012.

Steve provided both an overview of Fremont and some special insights into the Fifth and Final Fremont Expedition. This expedition took a cut-off from the Old Spanish Trail below the San Rafael Swell, through Cathedral Valley, and over an old Indian Trail into the Rabbit Valley where they camped on 13 January 1854.

On Saturday, after the Steve Taylor class on Friday on John C. Fremont, members of the class were joined by members of the Old Spanish Trail Association (OSTA) on a Relic Dig led by a US Forest Service archeologist (a volunteer with OSTA). My wife and I had hoped to join our daughter and son-in-law but she was not up to the cold and long stretch out in the field (we decided the night before). We enjoyed hearing their stories and seeing the photos and some video they took.

The site was also were Steve Taylor's great-grandfather, William Taylor, had built a cabin in 1878 (lived there until 1886). The relics that were found seemed to be from that period, not earlier, but they were happy with the finds. The link on the photo goes to a Facebook page of additional photos taken by my daughter, Annette.

In the photo, son-in-law Larry is using the metal detector. Other members of the team are recording activities, searching related areas, marking where relics were found, flagging and GPSing them for future reference.

Memoirs of My Life and Times
Buy Now

Useful links related to the Solar Eclipse in Utah

For his lecture during the second week of our visit, Steve will talk about the foundings of the several towns in the upper Rabbit Valley of Wayne County Utah.

More detail will be added.

I took the photo of Steve at this 'book table' where he provides access to the books used in his weekly lecture on Wayne County, Utah.

The evening activities begin with the announcement of the Wayne County High School Poetry Winners. My wife and I are "out-of-state' judges this year!

Mary Kaye Knaphaus and Jeff Chappell entertain before the Cross Town Cowboys return to the stage to close the evening and the Festival.

Image is my youngest daughter, Arrion, receiving a 2011 Heritage Starfest shirt for Christmas. I took the photo. Click on the photo to go to the official website of the event.

More details to be added.