Lumbini: The Birth Place of The Buddha

The Buddha is the founder of Buddhism. He was born on the full moon day of May 623 BC, in Lumbini, Nepal, and named Siddhartha. His father Suddhodhana was king of Kapilvastu, a small town in south-western Nepal. When his mother Maya Devi, Siddhartha was raised by Prajapati Gautami. After Maya Devi, Prajapati Gautami is another important woman figure in the Buddha’s life. She was not only his aunt and step-mother, but also the first woman to become a Buddhist nun. The Buddha’s teachings include the Four Noble Truth and the Eightfold Path.

Lumbini, the birthplace of the Buddha, is about 300 km south-west of Kathmandu, Nepal, and four hours drive from Gorakhpur, India. There is a garden in Lumbini, called Lumbini Sacred Garden, which is protected by UNESCO as World Heritage Site. In Lumbini Sacred Garden, there is ancient temple dedicated to Maya Devi, the Buddha’s mother. Inside the temple you can see ruins of ancient Maya Devi Temple, Buddha Nativity Sculpture and the Marker Stone, found during the excavation of the site. Buddha Nativity Sculpture depicts the birth of the Buddha and Marker Stone marks the exact spot where the Buddha was born.

The earliest archeological evidence about Lumbini as the birthplace of the Buddha is a stone pillar laid by Indian Emperor Ashoka in 249 BC. Other historical reference regarding historicity of Lumbini includes a travel account by a Chinese pilgrim in 4th century.

Tilaurakot was the home of Siddhartha Gautama, where he had lived for 29 years. Tilaurakot is 41 km west of Lumbini. In Tilaurakot, the ruins of Suddhodhana’s palace can still be seen. Suddhodhana’s kingdom is referred as Kapilvastu. There are lots of religious and archaeological sites in and around Lumbini.

How to Get to Lumbini

From Sunauli, the Indian border

If you enter Nepal from India through Sunauli border, you can reach Lumbini from Sunauli in about one hour in a taxi.

Zen Buddhism: In Search of Self (English Subtitled)
Buy Now

Lumbini was one of the cities in Kapilvastu, ruled by Shakya dynasty. Suddhodhana was the King, his kingdom was called Kapilvastu, and Tilaurakot was the capital. People in Kapilvastu were called Shakyas. King Suddhodhana’s only son Siddhartha abandoned royal life and became the Buddha. Years later, Siddhartha’s son Rahula too, became a monk. Shakya’s lineage ended and the rein went to the hands of another clan.

Legend has it Virudhaka, a king from Kosal, India, invaded Kapilvastu, torched the cities, and mutilated Shakyas. That was the retribution against Shakyas’ mischief; they had wedded his father to a slave. The vengeance came from the son of a slave. The Buddha was able to avert war for three times but eventually failed on the fourth attempt. Lumbini and other cities of Kapilvastu were eventually destroyed and lost in the rapids of time.

Ashoka, Indian king of Mauryan dynasty, visited Lumbini in 249 BC and erected a stone pillar marking the birth place of the Buddha. The inscriptions on the pillar read “Shakya muni Buddha was born here.” According to the chronicles, Ashoka worshipped the Nativity Tree, the tree under which Siddhartha was born; paid homage to the Pushkarini pond, and visited the places like Kudan, Ramgrama, Gotihawa and Niglihawa, the places associated with the Buddha. Ashoka also marked his visit in these places by erecting stone pillars. Pillars erected by Ashoka are called Ashokan Pillars, which can still be seen in these places.

Chinese pilgrims, in different times, travelled to the birthplace of the Buddha and wrote about Lumbini. Tseng Tsai visited Lumbini in the 4th century, Fa-Hsien in 5th century and Hiuen Tsang in 7th century. Among these Chinese pilgrims, Hiuen Tsang’s travel account is very descriptive. He gives detailed account of his visit, and describes the Ashokan Pillars. In 1312 AD, Ripu Malla, a King from Sinja, a satellite Kingdom in Nepal, visited Lumbini and left a stone inscription marking his visit.

Slowly, Lumbini and other cities associated with the Buddha were forgotten and the jungle began to engulf the entire area. Lumbini was lost for 600 years. Even the name was forgotten, people began to call it Rummindei and then later Rupandehi. Today, Lumbini is in Rupandehi district. It is a small town in the southern lowland called Terai, and very close to Nepal-India border.

During the archaeological survey in 1896, General Khadga Shumshere Rana and Dr. Alois Fuhrer discovered Ashokan Pillar in Lumbini. However, nothing concrete was done to protect the site until 1930. In 1930, under the guidance of General Kesar SJB Rana, a large scale excavation was carried out in Lumbini. During the excavation, Marker Stone, the stone that marks the exact birth spot of the Buddha was discovered. Other discoveries included the Buddha’s Nativity Sculpture, and gold casket.

On the occasion of the fourth World Buddhist Conference, in 1956, King Mahendra and United Nations General Secretary U. Thant visited Lumbini and chalked out a plan to preserve the history of Lumbini. 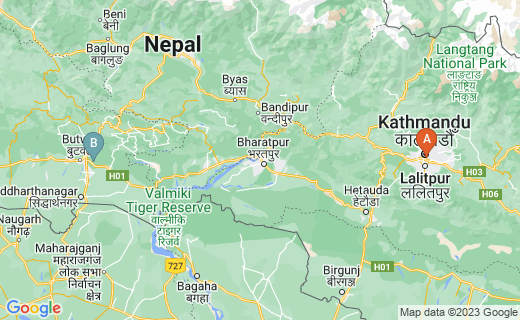 Where to stay in Lumbini

Depending on money you want to spend, you can stay in budget hotels and lodges or class hotels in Lumbini. The hotels in and around Lumbini provide Lumbini-Buddhist tour, vehicle service, local guide, cultural programs and village bicycling.

Entrance is free to the monks and nuns.

You can also extend your itinerary by cycling/walking around villages like Madhuvani village, Lumbini Adarsha village, Tenuhawa village and Ekala village and get a rare glimpse of rural life and get accustomed with the local people.

Statues of Buddha in Lumbini