Safety and convenience are always primary considerations when choosing an airport for domestic and international travel. Geographic location, weather, and proximity to amenities and necessities such as hotels, shuttle service, car rental, restaurants, and financial institutions can sometimes play a major role in the selection process especially for the business traveler.

Another very important aspect albeit to a lesser degree, is what I call the "Big 3", potential traffic congestion, airport accessibility, and parking availability or lack there of. At one point or another during our travels, we've all experienced the inevitable airport related frustration and delays due to vehicle over capacity on the freeways and terminal grounds, or the lack of adequate parking structures or spaces which forces us to rigorously circle the airport numerous times in perpetual motion before an open slot is identified. The preceding scenarios, in addition to several other critically important planning and logistical factors are the main reasons why many travelers are now taking advantage of Orange County's John Wayne Airport. It's certainly not "exempt" from large crowds and traffic congestion, but the odds of realizing a more seamless and less frustrating travel experience are substantially greater when utilizing JWA.

John Wayne Airport, also known as "Orange County Airport" or "Santa Ana Airport" located right on the border of Santa Ana & Irvine California which consistently rates in the top 5 list of safest cities in the nation, is home to 10 commercial, 2 commuter, and 2 cargo airlines. It's the only designated commercial service in Orange County and serves approximately 9 million travelers each year. The facility is centrally located within the County of Orange and almost an equal distance between San Diego County approximately 50 miles to the south, and Los Angeles County approximately 30 miles to the north. JWA is the only airport that can be accessed by all major metropolitan areas in Southern California by freeway commute of an hour or less. Near perfect year round weather provides seamless take off and landing conditions, delays are an uncommon occurrence.

Rural communities typically have one main airport designated for commercial air travel, but here in Southern California, we are very fortunate to have several prestigious venues within a 125 mile radius from which to choose. Over the past few decades, Orange County representatives have anticipated, planned for, and experienced significant growth leading to brisk development of upscale, highly desirable residential, commercial, and retail venues resulting in a sustained increase in the number of short distance commuters and long distance travelers who are now taking full advantage of John Wayne Airport in Santa Ana verses higher profile LAX . The discovery and conversion to this less congested, centrally located Orange County facility by the local population is indeed trending up.

Due to its close proximity to densely populated residential communities, JWA is known for very high acceleration take offs, sometimes near or at full throttle in order to gain altitude rapidly. Per an official spokesperson, city ordinances have a minimal "noise" tolerance policy regarding air bus traffic so in an effort to significantly reduce high decibel by-product, the commercial flights will at times modify standard procedure to ensure compliance. The result is a swifter take off at a moderately steeper angle, and once appropriate altitude is achieved, the power or "Throttle" is reduced to normal cruising speed.

As a very active traveler based here in Orange County California, I've flown out of JWA several times for both business and personal adventures, and on my maiden voyage, there was a somewhat noticeable difference in speed and take off angle as compared to most other airports. Some individuals take it in stride saying the experience provided minimal if any difference compared to other facilities, however, the enhanced accelerated ascent was indeed a memorable experience for me, but now that I am aware of this altered take off policy and procedure, I'm still extremely comfortable flying out of this airport. The facility is consistently ranked as an exceedingly safe airport and the mention of this slightly augmented aviation style is just an FYI for first time JWA travelers.

To help make your vacation or business travel planning process as convenient and effortless as possible, I've compiled what I call the "Best List" of nearby amenities to John Wayne Airport. Please read on to find 5 separate categories comprised of nearby Hotels, Car Rental Companies, Airport Shuttle Service, and Restaurants located on the JWA premises or within close proximity to your arrival or departure point. I've also included an interactive online map to help you obtain driving directions for everything listed with a simple "click". 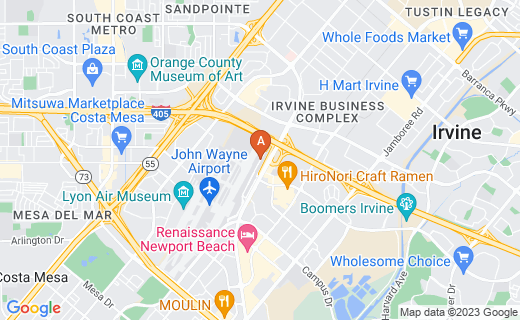