The Malaysian state of Terrenganu does not usually figure very highly on bucket lists of must see places, but if you visit Kuala Terrengganu you will find that it has a lot to offer to travellers who like destinations with a difference.

Although best avoided during the monsoon months of October to January, KT's temperature is good all year round, and makes the perfect long haul holiday destination.

Whether your perfect holiday involves trekking through rain forests, fishing, exploring historical buildings and museums, sailing to tropical islands or just lying on a sun lounger and relaxing, there really is something for everyone.

This should have been our final destination on a trip that started in our home state of Penang, and took in the Cameron Highlands, Kuala Lumpur and Cherating. We were so taken with Cherating that we stayed longer than planned and made the trip to Terengganu at a later date.

With years of experience travelling to Malaysia and two years actually living there I hope that my personal insight in this tourism guide inspires you to visit this east coast paradise for the holiday of a lifetime. 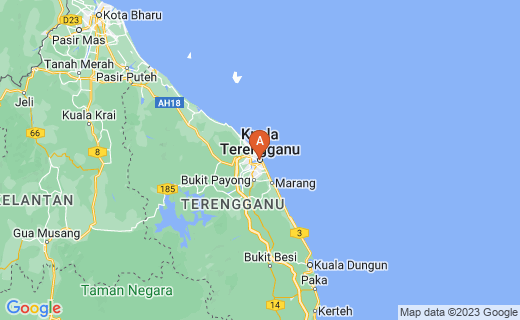 Kuala Terengganu is the state capital of Terengganu, and is situated on the east coast of Malaysia.

If you are holidaying in KT, the usual way to get there would be to fly to Kuala Lumpur and then transfer.

KT has its own airport and you can fly here from KLIA, with Malaysia Airlines or from Subang with budget airline Fireflyz.

Alternatively you could travel there by bus or private taxi, but it is a very long journey, and unless you want to stop off along the way I would recommend flying.

A History of Kuala Terrenganu

Terengganu can trace its history back as far as 1726, to Sultan Zainal Abidin I, the first Sultan of Terengganu.

Early on the area had close links with Siam, which only ended in 1909 with the signing of the Bangkok Agreement, which gave control to the British. This was not popular with the Sultan and in 1941, during the Japanese occupation, Siam regained control once more.

By 1945 it was once more under the British control, and became part of the Federated Malay States and later the independent Malaysia.

The turning point for the state came in the 1970s when oil was discovered offshore, and the revenue from this has helped to make the state prosperous. However, prosperity does not go hand in hand with over development, and the state has managed to maintain its old world charm.

Although it remains a largely muslim state, local Muslims are not as extreme as their Middle Eastern brothers, and you will find that alcohol is widely available in tourist areas. Non Muslim women are expected to cover up, however it is considered polite not to wear skimpy clothing when outside of the hotel or beach areas.

The state of Terengganu has the country's longest coastline. Mile after mile of glistening white tropical sands on unspoilt and uncrowded beaches, stretching to a totel length of over 150 miles, or 244 kilometers. Whether you like to sunbathe, take a dip in the South China Sea or an early morning jog on the sand, you will find the perfect beach for you.

My top 4 must visit beaches:

Pantai Penarik has a steady incline and shallow water which makes it ideal for sunbathers and swimmers alike.

Pantai Merang is adjacent to a traditional picturesque "kampung" (village) with pretty wooden houses, coconut trees and a perfect white sand beach. It is also the gateway the Redang islands, that are home to some of the country's best beaches and diving locations.

Pantai Batu Buruk is the main beach in central Kuala Terengganu. It is a place where the locals come to meet, eat and play. Here you will find food stalls, boats and a playground. Perfect for family fun or sitting a while and people watching

Pantai Kelulut you will find a sandy beach flanked by palm trees, that is perfect for sunbathing or swimming.

The Perhentian islands can be found thirteen miles or twenty one kilometres from the coast of Kuala Besut in the South China Sea.

Historically, sailing vessels transporting merchants from Malaysia to Bangkok used the islands for shelter and rest, which is where the islands got their name from: One-Stop Island translates as Pulau Perhentian in Malay.

These islands are considered to be amongst the most beautiful islands in the world, and both have stunning beaches, where the tourquoise waves lap the white sandy shores and palm trees sway majestically in the breeze.

Diving is very popular here, due to the clearness of the waters and the presence of turtles, tropical fish and corals.

Less than an hours drive from Terengganu's international airport is Lake Kenyir.

The country's largest lake, it is situated at the edge of Taman Negara national park in Terengganu, surrounded by ancient rainforest.

This freshwater lake was formed between 1978 and 1985 as a way to provide electricity, it spans 260,000 hectares and contains 340 islands, with numerous waterfalls and rivers.

Around Lake Kenyir there are many attractions including the Soak and Lasir waterfalls, Taat and Bewah caves and excellent fishing at Leban and Cacing. If you enjoy all things outdoors then you will not be disappointed by what Kenyir has to offer, and its clean air and refreshing breeze makes it a more comfortable climate than in Kuala Lumpur.

Lake Kenyir: Paradise in the heartland of Terengganu

Songket fabric is a specialty of the states of Terengganu and neighbouring Kelantan.

It is a hand-woven fabric that has gold and silver threads running through the material.

Traditionally used to decorate traditional Malay wedding outfits, today it is used for many decorative items such as tablecloths.

The price of the fabric depends very much on the quality, so expect to get what you pay for!

Royal Terengganu Songket is the brand name of the "Yayasan Tuanku Nur Zahirah (YTNZ)" foundation, whose aim was to promote Songket fabric and thereby safeguard this traditional handicraft and the local employment it provides. They also utilised new techniques to produce a lighter weight Songket fabric that is better suited to modern living. Their products are showcased at their showrom in Kuala Lumpur.

If you want to buy Songket whilst you are here then try the Pasar Payang or Central Market on Jalan Sultan Zainal Abidin.

The State Museum is the largest museum in the country and is full of historical artefacts that shows the state's rich heritage.

Situated on 27 hectares of land in Bukit Losong, it is an impressive building that was styled in the classic design of local palaces.

The has numerous galleries that house a diverse collection of artefacts including textiles, Islamic arts and modern arts.

The entrance fee is RM5 for adult Malaysian citizens and RM2 for children. Adult and child foreigners are charged RM15 and RM10 respectively.

We stayed at the Sutra Beach Resort on my first holiday to Malaysia and I would not hesitate in recommending it.

The Sutra Beach Resort is not a 5* resort, but with double room at less than $60 per night for bed and breakfast I think it is good value for money.

The hotel fronts onto the spectacular Pantai Marang, with mile upon mile of pristine white sandy beaches, littered only with driftwood and tropical shells.

I was amazed at the view from the infinity pool, the empty white sand beaches and the emptiness of the hotel during August and would not hesitate to visit again.

We were often the only people in the pool and after four days we left feeling totally chilled.

When booking a hotel in the topics you have to remember that paintwork can very quickly lose its lustre and show signs of wear. Do not be too quick to judge a tropical resort by Western standards.

Situated on Pantai Marang ,The Aryani is a small hotel, with only around twenty bedrooms that are built in the style of a heritage village.

Papacito has stayed at this resort on numerous occasions, and for him the outstanding feature is the outside bath that each bedroom has. Enjoy a soak in the tub at the end of a hard days sunbathing, whilst breathing in the tropical aromas and watching the magnificent sunsets.

Due to the close proximity to the Equator the temperature and hours of daylight remain fairly constant all year around.

Expect temperatures to be between 82 and 86 degrees Fahrenheit or between 28 and 30 degrees celsius. when at sea level here you can expect it to be very humid, but pleasant breezes blowing onshore from the South China Sea can help to make the humidity lower.

The best time to visit the east coast is between February and October. During November to January it is north-east monsoon season and the area can suffer from flooding. At this time of year it is best to steer clear of the islands as the rough seas can make transportation dangerous.