I'm a seasoned traveller and enjoy sharing sightseeing & travel tips . I particularly love London, my home of choice for over 50 years

London is Full of Historic Buildings and Fine Architecture

It is steeped in history, going back for hundreds of years.

Let me take you on a tour of some of the interesting architecture and landmarks around London. I have lived there for over fifty years, and never want to live anywhere else. Apart from being renowned for its entertainment, shopping and business facilities, London has many fine buildings and open spaces.

In this article I'll show you photographs of places which are well-known tourist attractions, and also some buildings you may not have heard of, with a little about their relevant history. Finally I will show you an area North London which consists almost entirely of Edwardian facades - a whole suburb which was built in the early 1900's and which has largely retained it's picturesque and much-loved Edwardian atmosphere.

Early History of London (called Londinium by the Romans)

In about 47 AD the Roman invaders developed a settlement , sitting on the River Thames, which they called Londinium. It was strategically situated at a narrow point in the Thames which could be bridged, and gave access to and from the rest of Europe.

Londinium was destroyed by Queen Boudica in 60 AD, rebuilt and gradually developed into a bustling port. The buildings were made of wattle and daub, which proved to be highly inflammable.

The Fire of London

The Fire of London in 1666 ravaged these wooden buildings, which caught fire very easily, the fire spreading outwards from Pudding Lane where it started. Much of the centre of London was destroyed. Although about 60% of London was laid waste, there were surprisingly few deaths, reputed to be only 16.

A law was passed that when the area was rebuilt, the new buildings had to be of brick and stone, to avoid such a widespread disaster happening again.

A memorial, called Monument, was built to remember the fire.

Sir Christopher Wren, a great architect of that time, was commissioned to rebuild St Paul's Cathedral, which had been destroyed in the fire.

Completed in 1677, this now stands as a permanent memorial, where the fire started, not far from St Paul's Cathedral.

The column is 61 metres (202 feet) high and has a staircase with 311 steps which lead to a viewing platform with a magnificent view of London.

You can click on the link to see more about Monument - a website devoted enirely to the Monument and Christopher Wren.

Monument to the Fire of London 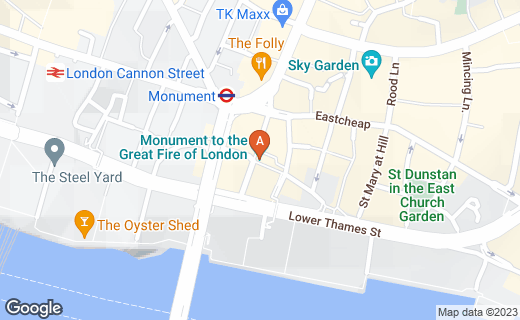 The Royal Courts of Justice - Also Known as The High Court

Built in 1875, this fine Gothic building, situated in Strand, near the River Thames, inspires all who enter. With its corridors, nooks and crannies and odd stone staircases, it is so big that it's easy to get lost - indeed, as a lawyer, going about court business, I have myself been lost in the veritable rabbit warren of passages, on more than one occasion.

This is the court where many of the most famous lawsuits take place. It only deals with Civil Law, not Crime. There have been several extensions to the courts in recent years.

The courts are generally open to the public, depending on the nature of the case being heard - for instance some cases about private family proceedings and adoption are not heard publicly.

The Court is situated in the Holborn area, where there are many architectural gems, if you know where to look for them.

The Royal Courts of Justice

The Royal Court of Justice, Strand on a Rainy Day

Interior of The Royal Courts of Justice

Map Showing Royal Courts of Justice, Strand, London WC2A 2LL, UK And Carey Street At The Rear Of The Court 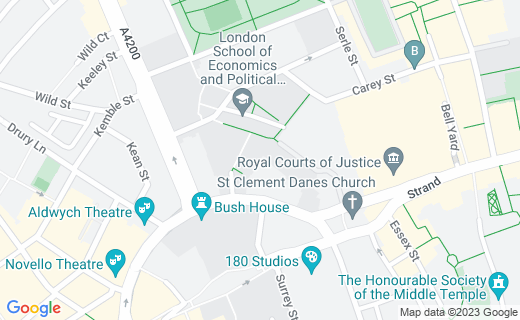 Carey Street - at the Rear of the Royal Courts of Justice

Carey Street was mentioned in "Bleak House", Charles Dickens' tale about a Court case in Chancery that took generations to be completed

Below you can see the view from the back door of The Royal Courts of Justice and it still looks the same as it did in Charles Dickens' time, 150 years ago.

Of particular interest is the stone statue over the doorway opposite, and the ornate metal lamp light in the top right-hand corner of the photograph, which is framed on two sides by the doorway of the court.

Carey Street is in the Holborn Area in Central London.

Do you Like Looking at Different Styles of Buildings - And Learning a Bit About Their History?

Have you been to London before, and what did you like doing there best?

Muswell Hill in the Borough of Haringey, North London is a popular residential area with many Edwardian buildings. The whole area was designed and developed by one builder, which gives it a very unitary feel.

There are very tight planning restrictions on the whole area to preserve the Edwardian facades. Recent planning applications for buildings which change the facades or modernise the area have given rise to a huge and united front of objections from local residents, and several redevelopments have been abandoned or toned down because of this.

Muswell Hill Library was one such proposed planning application

The Council owns the library and some land at the rear, and wanted to move the library to a different place, and then redevelop. The interior of the building was somewhat unsuitable for a modern library, and did not have appropriate disabled access, with steep steps to the front door, and toilets only on the upper floor. Eventually it was agreed to retain the present library and to make improvements to the interior. Another victory for maintaining the unified Edwardian appearance of the area.

Until recently, it was permissible to put in modern shopfronts, and there were some hideous anachronisms, but I've noticed that modern developments now seem to be re-instating old-style shop fronts.

Originally built as a palace for Queen Victoria, Alexandra Palace burnt down in 1873, and was rebuilt to become the first television studio in one part, and an entertainment venue with one of the world's largest organs in another area. There was also an ice skating rink.

After it Was Rebuilt, Alexandra Palace Was Used to Transmit John Logie Baird's First Television Broadcast

The rebuilt Alexandra Palace suffered another fire in 1980 which destroyed a large area.

Rebuilding has continued over the years, but the BBC were unable to broadcast the News from there after the fire destroyed a large part of its facilities.

The facade of the rebuilt palace looks similar to the original facade before the fire in 1873.

I myself worked at Alexandra Palace for the BBC in the 1960s - you can see the actual tower where my office was, on the right hand corner of the building, and more clearly in the photograph below that, showing the Alexandra Palace fire in 1980.

In the image above, which I took myself, you can see the Palace on fire for a second time, in 1980 when virtually the whole palace burnt down after an electrical fault.

It has been partially restored, and is now used for concerts and exhibitions and as a public hall. The Palace also houses the largest organ in the world, and, in that very hall, I took some of my solicitor's qualifying exams. The building was a bit run down at that time, with holes in the roof, and there were actually sparrows flying around our heads whilst we were trying to concentrate on law! 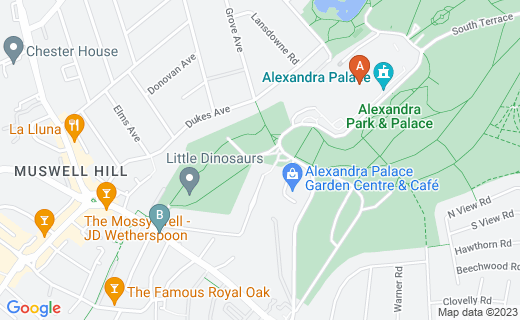