Festivals were designed to bring people together by remembering through celebration their heritage, traditions, religions, historical events - to name just a few.

There are lots of festivals but not all are family friendly. This isn't always because they are of a taboo themes but simply because they are more focused on the adult visitors. When you're a family with young children, such defeats the purpose of a festival.

The following is a list of best middle Tennessee festivals for the whole family.

Of six mule celebrations held annually in the United States, Columbia's Mule Day is by far the largest of all.

Formed in 1840 and originally known as Breeder's Day, the event was a one day livestock show and mule market held annually on the first day of May. Over time it evolved to an almost week long event, attracting thousands of attendees from far and wide.

In 1933, the celebration was officially named the Mule Day Parade and Celebration. Today, the mule parade is the biggest attraction of the four day event, among other such things as arts and crafts vendors, food vendors, beauty pageants, dog shows, square dancing competitions, tough man competitions, and much more.

In 1865, a local farmer discovered Portland's soil was ideal for growing strawberries; thus this small town declared itself "The strawberry capital of middle Tennessee." Even today, Portland continues to produce a large strawberry crop each season.

In 1940, the city decided to capitalize on their niche and the Strawberry Festival was born. With the exception of years 1942-45 when the US was enmeshed in World War II, the festival has been popular with locals and visitors alike for many generations.

Events of the festival include the centerpiece parade, the crowing of a beauty queen, a 5k run, as well as numerous crafts and food vendors.

Nestled between Interstates 24 and 40 is an adorable antiquing village frozen in the early twentieth century known as Bell Buckle. This hidden gem hosts many events every year but their most popular is the family friendly RC Cola and Moon Pie Festival.

Held every year on the third Saturday in June, visitors come from all over to see the world's largest Moon Pie, shop hundreds of craft vendors, sample a vast food varieties, and browse the shops in the business district.

Since 1979, Smithville has hosted millions of visitors from around the world to pay homage to it's Appalachian bluegrass roots with three days of live music, food, and intense competitions every year during the first weekend of July. Other activities include arts and crafts vendors, whose tents line the side streets of Courthouse Square and a variety of games for the young and young at heart.

Appropriately celebrated in the historic Germantown village of Nashville, Oktoberfest is one of the top rated celebrations of its kind in the nation. Visitors should expect authentic German food, three stages with live music, craft vendors, lots of beer, and many more German theme activities.

Where once corn grew unnoticed along Interstate 24 on a Coffee County farm, the third weekend of June each year will find the 700 acres overflowing with people of all ages, hailing from places all around the world. Bonnaroo can only be described as a larger scale, modern day Woodstock.

Visitors can camp on site - tent or RV/camper and then set out to explore. Everything you need is within Great Stage Park so no need to leave the grounds and there's plenty of activities going on all night (away from the campground, of course).

Tickets are a bit pricey for many families but should you ever get the opportunity, don't pass it up. It's well worth the money spent on this festival that's fantastic for all family members.

More than 100,000 thousand men, women, and children will walk the streets of Franklin's restored downtown Main Street during it's namesake festival every year.

Hosted by Franklin's Heritage Society, proceeds collected from the festival are used for restoration and maintenance of its downtown. which has been the society's sole purpose since its organization in 1967.

This popular festival got its start in 1978 when two men decided to have a banjo picking contest. One of those men was the grandson of a man known widely as Uncle Dave Macon.

The men thought of the idea when they were brainstorming ways to bring more business to the then-small city nestled between Chattanooga and Nashville along Interstate 24. Over a sandwich lunch, they discussed fun, family-friendly activities that would bring people to Murfreesboro's court square. A music festival seemed to be the perfect idea.

And so it was. The festival crowds grew too great for the original location on court square. In 1984 the event was moved to the pioneer village Cannonsburgh, built just a few blocks away as a US Bicentennial celebration project, a perfect setting for a festival focusing on folk, bluegrass, and rockabilly music. Other attractions include a multitude of truly handcrafted items from a variety of vendors, children's activities, and delicious food.

For one weekend every June, some of the world's best BBQ'ers flock to the quaint southern town of Lynchburg to compete for the Jack Daniel's World Championship Barbecue title. Visitors can take tours in the Jack Daniel's distillery, shop Lynchburg's historical downtown, play original games such as the Country Dog Contest, Butt Bowling, and Bung Toss competitions along with cooking and grilling demos, live music /entertainment, pie auction, and a petting zoo.

I cannot describe it any better than the festival's website:

Travel back to 16th Century England. Our Village of Covington Glen comes alive with the bustle of a Renaissance Marketplace..skilled Artisans from all over the country display their wares from silks to swords; from gems to jewels. Flavors, aromas and tastes of specialty foods and drinks...Hear the sounds of Renaissance...as they echo through the trees. Color, movement, and peals of laughter welcome those who thrill to the challenges of Games of Skill and Man-Powered Rides.

Tennessee Renaissance Festival 2017: Weekends in May

Tennesseans love celebrations and these are but a few of our many festivals throughout the year. For a statewide listing of festivals and similar events, visit www.tnvacation.com. 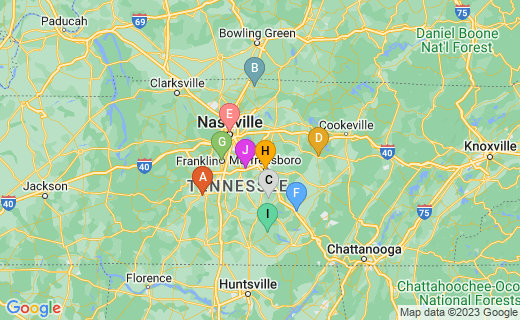