Monument Valley is a very remote section of the Southwestern United States on the Arizona/Utah border, close to the Four Corners region. From looking at the pictures, it does not look like a traditional valley at all, and it isn't. Huge, ancient, towering red and brown buttes, beautifully clear skies, and a quiet isolation make this Native American Indian Reservation one of the Southwest's true gems. The unrivaled, amazing desert scenes of Monument Valley may look very familiar to you, even if you haven't been there...

Gigantic rock formations, towering buttes, desolate desert, and some of the clearest blue sky you've ever seen...it looks like a National Park, but the isolated Monument Valley is actually part of the Navajo Nation Reservation. The Navajo Nation has the right to govern itself, and covers part of Arizona, Utah, and New Mexico. There are almost 300,000 Native Americans in this jurisdiction. Monument Valley is best accessed through the Monument Vally Navajo Tribal Park, in the heart of valley. Through a 17-mile dirt road "Valley Drive" tour, you can view the entire valley, right up to the rock buttes known as "the mittens." It's tough on most cars, so if you're planning a trek to the valley, either take a 4-wheel drive vehicle, or better yet, take one of the 3-hour jeep tours on site.

That's not dÃ©jÃ  vu you're experiencing, you've most likely seen the image of Monument Valley's "Mittens" in advertising, western films, music videos, photography and art countless times without knowing it was Monument Valley. This highly photographed area of the Southwest is the "Mittens" section of Monument Valley. Several monolithic rock formations tower between 400-1000 feet into the air, casting shadows many times that size across the desert valley floor. 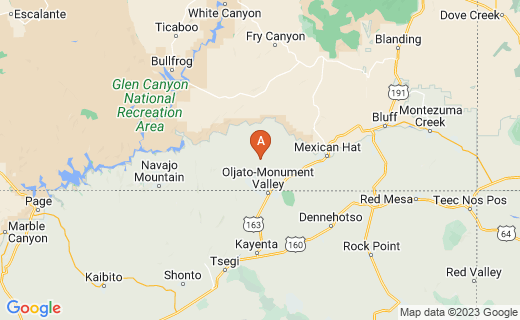 Want to find out even more information about this beautiful region of America's Southwest? These links offer great photos and guides to the area:

Have you heard of Monument Valley before reading this page?

Millions of Years in the Making...

Monument Valley's huge formations are made of sandstone, eroded over time by water and wind, to leave the giant buttes here presently. The entire valley was comprised of sandstone at one time, and the valley formations will one day disappear from erosion in the distant future.

Not the Typical Vacation Spot

The weather in Monument Valley is extreme, easily staying in the 90's for most of the day in the peak summer, while lowering down into the 60's at night. Expect winter temperatures stay in the 20's and 30's all day. Summer is peak visitor time to the valley.

If you're headed to Monument Valley, you're going to want as much info about it ahead of time before you get there. This guide will teach you plenty about the area. You'll also get an inside glimpse of the towering mittens and buttes of the valley, and some tips for visiting this Navajo park.

The following pages are part of what is known as the Grand Circle. This is a loosely tied collection of destinations across Utah, Arizona, Nevada, New Mexico, and Colorado that make for an exciting road trip. You can read more about each destination below:

Bryce Canyon National ParkBryce Canyon is located in the southwestern portion of Utah, and is home to the famous red and white hoodoos spire formations, with remarkable hiking trails and scenic opportunities.

Zion National ParkThe majestic Zion region has been eroded over time by the Virgin River, which slims down to the challenging hiking area of the Narrows.

Monument ValleyDeep in the four corners region of the southwest is the often filmed Monument Valley reservation area. Now under the rule of the Navajo tribe, the area is open for touring, hiking and photography.