The city of New Orleans is located in the state of Louisiana, in the Southern US. This largest city in the state which straddles the Mississippi River has a subtropical climate which means the winter is mild and short.

New Orleans is famous for its unique architecture, music, delicious cuisine, as well as various celebrations and festivals such as Mardi Gras, which are a reflection of its diverse cultural heritage. It is also home to Tulane University, also known as "Harvard of The South."

Explore this page and get a glimpse of the Crescent City (one of New Orleans' nick names), and you will know why you should visit it.

By the way, the "LA" that follows New Orleans is the abbreviation of Louisiana, NOT Los Angeles! ;)

I first visited the New Orleans (a.k.a. The Big Easy) in the mid 90's when I was interviewing for a job. At the time I was living up north where the winters are frigid. I couldn't wait to move to a warm climate.

It was in January when I traveled to New Orleans. My plane landed at night and the temperature was 45F. It was warm compared to the single digit temperature in the Midwest. I went straight to my hotel to rest and prepare for the interview the following day.

In daylight immediately I saw New Orleans as a unique city with distinctive architecture. I had heard of the famous French Quarter (also know as Vieux Carre) so I went there after the interview. I was amazed at the architecture of the buildings there. Most of them had colorful walls and decorated ironwork balconies. Horse-drawn carriages in the streets added to the uniqueness of the place.

As I walked down the famous Bourbon Street I saw plenty of interesting arts, antiques, and gift shops. Then my eye caught something very unusual (to those who don't live in New Orleans, at least): a voodoo store! So I went in and saw quite a few interesting items such as voodoo dolls, Gris-Gris bag, incense, and magical ritual items. Wow, cool!

It was lunch time before I knew it, so I decided to stop at one of the quaint French Quarter restaurants and grab a bite to eat. I sat in the courtyard which was really nice as the temperature was in the upper 60's and the sun was out. I ordered seafood gumbo and it was delicious.

After lunch I drove around New Orleans and visited the Audubon Park. Since I didn't really have that much time before I had to fly back home, I didn't get to see much of the other attractions.

I ended up getting a job somewhere else but my short visit to New Orleans made me fall in love with the city. As luck would have it, a few years later I moved to the Southern US, just a few hours' drive from New Orleans.

I visited New Orleans four more times before hurricane Katrina devastated it in 2005. I haven't been back there since, but I'm glad they're making progress in rebuilding, and I'm certainly planning to visit the Crescent City again in the future.

The Crescent City is a nice place to live

As mentioned above, New Orleans has a subtropical climate. Very rarely does it ever snow, and when it does, it never accumulates requiring you to shovel the snow or scrape it off your windshield.

Yes, New Orleans summer can be sultry but I can better deal with that than with freezing temperatures. It also rains a lot in New Orleans but I also love rain, so it's not a problem for me.

New Orleans sits in the Mississippi River Delta, surrounded by swamps and bayous which are inhabited by interesting animals such as alligators, turtles, beavers, and frogs among others.

Aside from exotic palm and banana trees that are normally found in warm climates, you can also find a variety of plants in the wetlands of New Orleans such as cypress and live oaks draped with Spanish moss which creates an eerie scene in the dark. 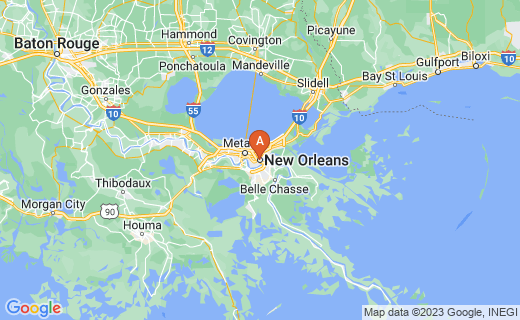 Explore the dark side of The Big Easy

There are quite a number of mystical and mysterious things about New Orleans that add to the uniqueness of the city.

In New Orleans they bury people above the ground due to the ground water levels which makes traditional burial impractical. The cemeteries are called "cities of the dead" as the above-ground burial vaults do look like buildings. Some even have fences surrounding them. Are they haunted? Haha, what a question!

Many folks claim real vampires roam the city of New Orleans. One of the greatest vampire authors, Anne Rice is a New Orleanians.

New Orleans is known for its Voodoo. Marie Laveau is the most well known American voodoo priestess to have lived to date. She is buried at St. Louis Cemetery #1 in New Orleans and is credited with almost single-handedly being responsible for the flourish of Voodoo in America today.

New Orleans food is simply delicious! It has developed from generations of amalgamation of French, Spanish, Italian, African, Native American, Cajun, and a hint of Cuban traditions combined with local flavors. Some of the best known chefs such as Emeril Lagasse and Paul Prudhomme are New Orleanians.

Enter a local restaurant in the Crescent City and you will find the following on the menu: etouffee, jambalaya, gumbo, and red beans and rice with sausage. Crawfish or crayfish is also very popular, as well as Gulf oysters on half shell. If you prefer sandwiches, grab a Po'boy (a traditional Louisiana submarine sandwich) or the Italian Muffaletta.

Hungry for a snack? Why not try New Orleans' delicious candy called Praline made with granulated and brown sugars, cream, butter and pecans. Or you can head over to the world famous Cafe Du Monde and have some beignets (French doughnuts) and cafe au lait. Mmm... yummy!

This section won't be complete without telling you my favorite New Orleans food, and it is... red beans and rice, hands down! Especially if it's served with alligator sausage. Yes, people eat alligators down there, so don't scream at me! ;)

One of the most popular attractions in the Crescent City

New Orleans and Mardi Gras have almost become synonymous. It's one of the first things that come to people's minds when you mention New Orleans. Sure, Mardi Gras is celebrated in many other cities across the world, but the one in the Big Easy is one of the biggest. Even in the year after hurricane Katrina, the Mardi Gras celebrations went on.

Hundreds of thousands of tourists and locals alike gather in the city every year especially on Bourbon Street in the French Quarter to watch the parades, have a great time, and let loose! Many can't resist being naughty, which is fun, but you better be careful that you don't end up paying a fine or spending some time in jail. There are other areas outside the French Quarter that have family friendly parades and celebrations.

The festivities all began on March 3, 1699, when a group of French explorers set up camp on the west bank of the Mississippi River, about 60 miles downriver from the site that would later become the Crescent City. That day happened to be Mardi Gras, a major event on the French calendar (the day before Ash Wednesday). So the group's leader, Pierre Baptiste Le Moyne, Sieur d'Iberville dubbed the spot, in the spelling of the time, La Pointe du Mardy Gras. The Rex organization put a marker at the Louisiana site 300 years later. An account from 1743 notes that the custom of Carnival balls was already established by that date (during the time Bienville was still governor).

You can read more about this on Wikipedia.

If you have been to Disneyland (in California) you most likely know the area called New Orleans Square which is based on 19th century New Orleans, and was the first new land to be added to Disneyland after the park's opening. The area was opened to the public on July 24, 1966.

The Haunted Mansion, a New Orleans style building, is an innovative haunted house experience (very appropriate, right? - read about how haunted the city is), while Pirates of the Caribbean takes park guests along watery channels through expansive swashbuckling tableaux. New Orleans Square is also home to a private club and restaurant, Club 33, located above the Blue Bayou Restaurant around the corner from the entrance to Pirates of the Caribbean.